What are the origins of democracy?

Browse the article What are the origins of democracy? 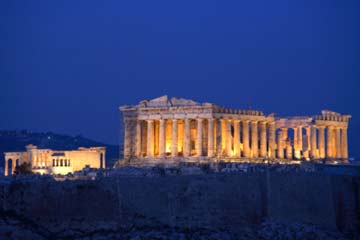 The Parthenon in Athens, Greece. The Greeks are often credited with formalizing the idea of democracy. See more pictures of the Parthenon.
Massimo Pizzotti/ Photographer's Choice/Getty Images

All things considered, democracy is a pretty decent system of government, especially when compared to types like dictatorships, absolute monarchies and totalitarian regimes. In a democracy, people have the power to make the decisions that affect their daily lives, as opposed to other governing strategies where power is concentrated in the hands of a few.

The idea that the United States is a democracy is deeply engrained in the country's collective national psyche, but according to the CIA, the U.S. is technically a constitution-based federal republic [source: CIA World Factbook]. When it comes to definitions of governments, "murky" and "overlap" are two words that quickly come to mind, so we're just going with the CIA's definition. Because, after all, they know where we live.

But it turns out a constitution-based federal republic is actually quite similar to a direct democracy. Basically, it means that instead of everyone heading to Washington, D.C., to vote on every office, resolution and bill, we elect representatives to go for us. Things would get awfully crowded in the capital if we didn't.

Democracies, and related political systems like republics and parliaments, are nothing new. The Athenians are generally credited with coming up with the idea of a democracy in the 6th century B.C., although there are theories that democracy stretches back quite a bit further in a more primitive form. For example, prehistoric tribes might have taken group votes when it came time to decide whether to follow one set of tracks over another.

The Greeks, of course, had a fairly loose interpretation of democracy, since the key word to determine someone's right to vote was "citizen," not "person." Women, slaves, foreigners and males under 18 were all excluded from the ranks of citizenship. Only adult males were qualified to don togas, pop on pairs of sandals and mosey down to the weekly assemblies to cast their votes. This tradition was decidedly popular, and the practice of democratic exclusion continued well into more modern times. Today, various suffrage movements have broadened the potential voting populace for many of the world's democracies.

On the next page, you'll find links to more great articles that are guaranteed to sate even the most curious among us.