The Peculiarity of the Helike Delta: Making Lost Cities 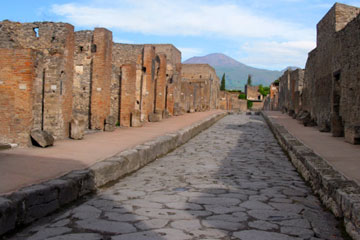 Pompeii, Italy (shown above), was an incredible archeological find, a city frozen in time. Researchers looking for ancient Helike hoped to find a "Greek Pompeii" in the city. They found that and a "Bronze Age Pompeii" as well.
iStockphoto/Thinkstock

It's almost as if the Helike Delta was custom-made to produce lost cities. The area provides an attractive site for human habitation: the Gulf of Corinth offers quick transportation and an enormous source of food. The three rivers that form the delta bring fresh water from the mountains and a source of irrigation for crops. The warm climate makes living comparatively easy for a subtropical species like Homo sapiens. It's an intuitive place for people to live.

The area is also plagued by tectonic activity. Two separate faults run parallel through the area and they are capable of violent movement. Geological evidence from the quake that ruined Helike shows that the earth rose 6 feet (2 meters) along one side of the fault line and sunk the delta about 9 feet (3 meters) lower [source: Soter]. These same quakes can generate massive tsunamis, which come ashore at as much as 20 miles per hour (36 km/h) at heights of 100 feet (about 33 meters) [source: Hyperphysics].

Coastal areas around the world are subject to this combination of violent forces, but those three rivers that form the Helike Delta give the area a peculiar characteristic. The rivers bring silt to the coast and over time have extended it further and further into the Gulf. One oft-repeated example is of a house that was built along the shore in 1890; it is now a thousand feet (304.8 meters) inland [source: Gidwitz]. In a single night an earthquake ruined the city of Helike, a giant wave plunged it underwater, and over the centuries the rivers have buried it.

But the researchers who discovered ancient Helike after 12 years of digging also found that this ravage of nature happened more than once. The attractiveness of the area and its attendant destructiveness formed a cycle where humans established a city, nature removed it and, as the passage of time cultivated fecklessness, another city was founded. Archaeologists found evidence of lost cities from the Byzantine period, which ended in the 15th century A.D., beneath that lay a ruined Roman city, from between the 2nd and 4th centuries A.D. Beneath the Roman ruins lay Helike, which was destroyed in 373 B.C. But the archaeologists were astounded to find an even earlier ruined settlement from the Bronze Age of around 2600 to 2300 B.C., The group excavating the site also found signs of human habitation even further back, into the prehistoric Neolithic period, which began as far back as 12,000 years ago.

In all, six distinct occupation horizons have been discovered at Helike. People had been living in the Helike Delta for a long time, and nature had been destroying their settlements and then preserving the ruins.