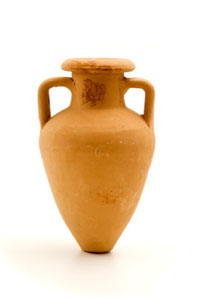 Scores of amphorae, large vessels or jugs, from the Bronze Age were discovered in a store house in a settlement that predated Helike by several thousand years.
iStockphoto/Thinkstock

In much the same way as Atlantis, Helike long stood as a legendary lost city. But the people who dedicated themselves to finding it had a distinct advantage over their counterparts who search for Atlantis: good documentation.

For several centuries following its sudden destruction, Helike remained submerged but visible, which made it a bit of an early dark tourism attraction. For centuries travelers and writers visited the area and reported back about what they saw. These ancient Greeks and Romans even documented the location of the city in stadia, a unit of distance equal to roughly 600 feet (183 meters) [source: Vincent, et al]. Even with the rivers extending the shoreline outward for the last two millennia, all of this made the prospect of finding Helike easy -- compared to, say, Atlantis at least. But in practice the city proved hard to locate. The legendary Greek archaeologist Spyridon Marinatos made finding Helike the obsession of his late career, and when he died in the 1974, his search had managed to bring the lost city of Helike into broader awareness. In 1988, two Cornell professors began searching for ancient Helike in earnest.

The search used sidescan sonar equipment to compile an undersea map of the area just off the coast of Helike in the Gulf of Corinth. They found an ancient seawall buried beneath the sediment, as well what may be the ten Spartan ships that were overwhelmed by the tsunami that destroyed Helike that night in 373. But no sign of the city turned up. It wasn't until one of the team leaders, a Greek woman, reexamined the old reports of contemporary Greeks and found that previous searches had been misled by an inaccurate translation for a body of water. Rather than being submerged in the gulf, Helike had been swallowed up by an inland lagoon.

Turning their search onto land, the project team managed to find first the ruined Roman city, along with intact Roman cemeteries and the Roman road that ancient travelers used to view Helike. Just 12 feet (3.66 meters) beneath the surface of the farmland in the area was the lost city of Helike. Indeed, when they examined the dirt, they found evidence that the now dry dirt had once been the silt of a lagoon.

Excavations have turned up industrial buildings, kilns and looms, intersecting streets flanked by buildings, the city's coins featuring a bust of Poseidon in near mint condition, a storehouse of Bronze-age jugs, some still with their contents intact, Greek cemeteries and lots of pottery and tools. Most exciting, however, is the promise of more: Ground-penetrating radar has shown that there are more buildings to be found, that the bulk of Helike still lays undiscovered. What's more, it appears to be largely intact and frozen in time in that terrible moment when it was lost.

To think that finding Helike will call off the search for Atlantis is folly. The search for the legendary lost city continues. One American archaeologist believes he's found the lost city in Spain, 60 miles (96.5 kilometers) inland [source: Howard]. Ironically, the discovery of Helike supports the idea that if it does exist, the lost city could be found submerged in soil rather than sea.