Browse the article Was there a real Paul Bunyan? 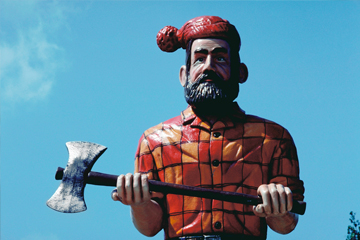 According to legend, Paul Bunyan was so huge at birth, it took five exhausted storks to deliver him to his parents.
© Lowell Georgia/Corbis

The story of Paul Bunyan, the giant lumberjack, is one of the most enduring tall tales in North America. The folktale is a favorite in children's classrooms and immortalized in cartoons and tourist attractions all over the United States. Here's a quick refresher on the story:

According to legend, Paul Bunyan was so huge at birth, it took five exhausted storks to deliver him to his parents. When he was a week old, he fit into his father's clothes. He ate 40 bowls of porridge a day. He got a big blue ox named Babe for his first birthday. Babe grew so large that her footsteps around Minnesota created the state's 10,000 lakes. And Paul created the Grand Canyon simply by dragging his axe behind him. As a team, Paul and Babe the Blue Ox were unbeatable loggers. They became legendary across the United States for hiring teams of large men and clearing forests in an instant.

Of course, this is a literal tall tale, but is it based in fact? Was there a real Paul Bunyan?

Some historians believe Paul Bunyan was based on a real person — a French-Canadian logger named Fabian "Joe" Fournier. Fournier, born in Quebec around 1845, moved to Michigan after the Civil War to take advantage of the high-paying logging industry. His brawn, 6-foot height, and supposed two sets of teeth made him strong, efficient and fearsome among his peers. He died in 1875 after being struck in the back of the head with a mallet during a brawl.

As what usually happens with tall tales, this story grew bigger and bigger as it was told and retold over the years. People added more details, exaggerations and hyperbole. At some point, the story intertwined with that of another French-Canadian war hero by the name of Bon Jean. The tales of Bon Jean and Fabian Fournier combined to take their place in American folklore under the name Paul Bunyan [source: Browning].

Some historians believe the tale of Paul Bunyan would never have elevated to folklore or tall-tale status at all, if not for an advertising campaign. In 1914, the Red River Lumber Company, in an effort to spice up its advertising, hired William Laughead to draw a series of pamphlets about a little story of a big guy named Paul Bunyan. Laughead embellished the story and added imaginative details, and suddenly the story of Paul Bunyan was hugely popular all over the country. Children clamored for the comics and books, and the ads were all the rage. Many say Laughead was actually responsible for the "birth" of Paul Bunyan [source: Forest History Society].

Regardless of his origins, Paul Bunyan is still one of the quintessential heroes of American folklore. Why else would at least six towns in the United States claim him as their own?