Revisionism as a Means of Correcting the Facts 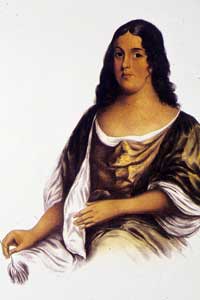 Pocahontas was around 11 years old when she met Capt. John Smith.
MPI/Stringer/Getty Images

Recounting­ historical events through the centuries can be similar to playing a game of telephone. Th­e first person starts with something simple, like the meeting of Capt. John Smith and Pocahontas in Jamestown. By the time the message reaches the last person in the circle, it's become primped and polished into a colonial love story. Revising history can untangle that string of miscommunication.

In the Disney version of the Pocahontas story, the Native American is a leggy, attractive woman who falls madly in love with Smith. Aside from the musical numbers, the plotline from the animated film isn't too far from the history lesson that was taught in schools. But like the tale of George Washington and the cherry tree, that of Pocahontas and John Smith has been revised. Thanks to Smith's journals and other written sources, we know now that the famous Native American was probably 11 years old when they met -- there was no steamy romance or marriage between the couple. Instead, Pocahontas married a widower named John Rolfe and died around the age of 21 [source: LaRoe].

Archeology, anthropology, forensic science and other disciplines all contribute to revising history in the most basic sense of correcting facts. As time passes, people may share old secrets, such as the revelation that Mark Felt was the Watergate informant given the nickname Deep Throat. Documents may become declassified, which happened after the collapse of the Soviet Union in December 1991. Whenever new facts are unveiled, they alter -- and hopefully enhance -- our understanding of past events.

But updating history isn't always as simple as adding in a couple of sentences here and there in textbooks as newsworthy events take place. First, scholars and researchers develop new historical theses and theories that they publish. Then, academics, teachers and textbook authors meet in conferences to compile recommendations for which of the new facts should be included in upcoming textbook editions. They also analyze current textbooks for accuracy and tone. The Institute for International Textbook Research, for example, analyzes the language of the text and the diversity of topics covered to ensure that they aren't skewed toward particular races, genders or cultures [source: Sidhva].

From there, teams of scholars usually collaborate to write the textbooks for publishing companies. But there's a time lag that takes place during all of this. Publishers often don't have the budget to print a new edition of schoolbook to cover every new bit of pertinent history. Instead, many history textbooks are written with the goal of a 10-year shelf life [source: Pingel]. As a compromise, some publishers may print supplemental material to incorporate with older texts.

Even when the facts are correct and updated, revisions aren't always embraced warmly. For instance, when the American Historical Association submitted its updated National History Standards for textbooks in 1994, the organization received heaps of negative feedback. Some decried the downplaying of heroic characters, such as Daniel Boone or Thomas Jefferson, and the greater representation of less famous historical figures like Harriet Tubman [source: Freitag]. This isn't terribly surprising since, generally speaking, historical revisionism doesn't carry positive connotations.