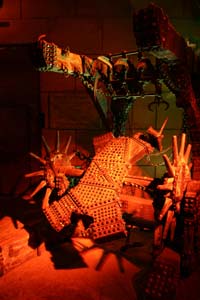 Care to spend an afternoon on the rack? Didn't think so.
©iStockphoto.com/akiwi

During the course of human history, torture often appears to have been viewed as simply a fact of life. In his book "History of Torture Throughout the Ages," George Ryley Scott notes that many primitive groups believed torture was downright inevitable among enemies. After all, ritual human sacrifice was a widespread practice, and initiation rites often involved some form of torture on a fairly frequent basis [source: Scott].

Of course, it doesn't end there. Criminals forced into the gladiator stadium, citizens charged with heresy or witchcraft, slaves accused of wrongdoings, miscreants who couldn't outrun the law -- all frequently found more than a touch of torture in their cards. Whoever the victim, he or she might have ended up poked and pulled, stripped and scalded, branded and beaten, hacked and hanged, burned and boiled, dragged and drugged, mutilated and maimed, dismembered and disemboweled -- you get the idea. From primitive tribes to ancient civilizations and from medieval societies to modern militants, torture has been a fundamental force almost every step of the way. But whether the majority of the population was thrilled or angered by torture or even cognizant that torture was a potentially arguable practice, we'll probably never know for sure.

One final aspect to consider is the fact that while many of the surviving critical commentaries of torture note its ineffectiveness in eliciting valid information and accurate confessions, they're often strangely silent on the topic of discontinuing the practice altogether.

For more information on torture, see the links on the following page.