The Hunt for Nazi Treasure 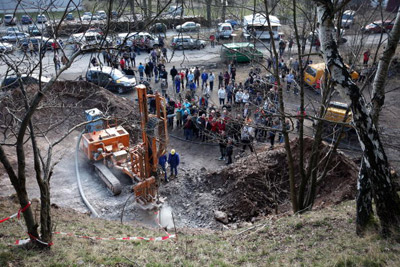 The legendary Reichsbank treasure is said to be worth millions of dollars [source: Channel 4]. In 2000, German treasure hunters believed they'd found the hiding place (deep in the German Alps) where the rest of the gold was stashed. But the harshness of the terrain made it impossible for them to find the buried loot, and they eventually gave up [source: Channel 4].

But in February 2008, the search took on new life when treasure hunters converged on the German hamlet Deutschkatharinenberg. The mayor of a nearby town called Deutschneudorf, Heinz-Peter Haustein, has been looking for the gold there for a decade. When a man named Christian Hanisch turned up, the search became something of a frenzy. He seemed to have evidence that confirmed what Haustein believed: the gold was in Deutschkatharinenberg.

Hanisch's father was in the German air force during WWII, and Hanisch had apparently found an old journal of his father's that indicated the location of the missing gold. He joined forces with Haustein, and they gathered a full treasure-hunting team to go looking for the man-made mountain cavern that supposedly holds the loot. They claim they've not only found the gold, but also the legendary Amber Room.

The Amber Room was a chamber in the U.S.S.R.'s Catherine Palace, near St. Petersburg. The room's walls were covered in paneling made of amber backed in gold. The panels were stolen by the Nazis during the war, and were last seen in an art exhibition in Germany in 1945. After that, they disappeared. A few of the panels have since been recovered, but most have never been found.

Haustein's team claims to have found pieces of the Amber Room. They say they've confirmed with an electromagnetic metal detector that the gold lies somewhere beneath the surface of the East German mountainside, probably about 60 feet (20 meters) down. They estimate a find of about 2 tons of gold, and they believe this discovery includes the Amber Room. They seem to be basing this belief on the idea that if there's that much gold down there, it must include the gold from the Amber Room, which is a significant piece of the Nazi treasure.

But the dig has so far been unsuccessful and the hunters can't seem to find the cavern. As of late February 2008, they have retained the services of a geophysicist to help them figure out exactly where to dig.

Even with the help of a geophysicist, Haustein's team doesn't expect to get into the chamber any time soon. They believe the stash might be booby-trapped, and they want explosives engineers to check out the situation before they dig any further.

In the midst of all this treasure hunting, the question arises: If they find Nazi gold, do they get to keep it? When wartime loot is recovered, to whom do the spoils go?