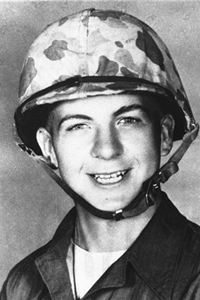 Lee Harvey Oswald at age 19, shortly before being discharged from the U.S. Marine Corps.
AP Photo

The Oswald family moved around a lot. Oswald went to school in Texas, Louisiana and New York. While in New York City, Lee began to exhibit behavioral problems in school. A social worker deemed him to be an average student who was emotionally starved. He often had fantasies in which he held power over other people [source: Warren Commission Report].

At 16, Oswald dropped out of school and tried to join the Marine Corps. The Marines rejected his application because of his young age. He worked odd jobs and began to read communist literature. He wrote to the Socialist Party of America when he was 17 to express his enthusiasm for Marxism.

Six days after he turned 17, he re-applied to the Marines and was accepted. Oswald qualified as a sharpshooter during boot camp. Later, he would take a similar test and rate only as marksman, one rank lower than sharpshooter. Oswald served in the Marines from 1956 until 1959. Much of his time in the Marines was spent overseas. While in the Marines, Oswald taught himself Russian and continued to study the Soviet Union.

Three days after leaving the Marines, Oswald left home on a long trip to the Soviet Union. He had falsified an application to the Albert Schweitzer College in Switzerland to obtain a passport. Once in Moscow, he applied for Soviet citizenship. Soviet officials denied his request and ordered him to leave Moscow. On Oct. 21, 1959, Oswald slashed his left wrist in an apparent suicide attempt. Soviet officials said Oswald could stay in the Soviet Union on a year-to-year basis. While Oswald expressed interest in renouncing his American citizenship, he never made it official.

Oswald met, fell in love with and married Marina Nikolaevna Prusakova. After his marriage, Oswald wrote to the Soviet and American embassies, seeking a return to the United States. He had become disenchanted with the realities of the Soviet Union, which failed to meet his expectations. The pair left Moscow on June 1, 1962.