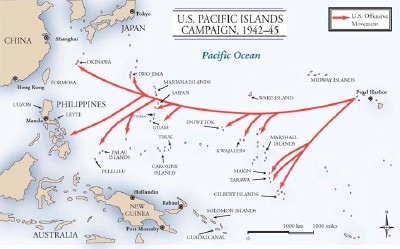 In October 1943, the United States launched an air raid on the island of Bougainville and helped plan the invasion of France. The following World War II timeline describes these and other major events of the period.

October 8: Civil war erupts in Greece when the country's pro- and anti-Communist factions face off.

October 10: A German U-boat lays mines at the eastern end of the Panama Canal.

The U.S. attacks the Axis-held islands of Crete and Rhodes with B-17 Flying Fortress bombers.

October 12: The Allies obtain permission to establish a convoy defense base on the Azores, an important island chain in the Atlantic that belongs to Portugal.

Yugoslavian partisans sabotage the Krupp steelworks in the city of Zeneca.

October 14: An uprising at the Nazis' Sobibór death camp claims the lives of 11 guards, while more than 100 prisoners manage to escape.

October 18: The Nazis begin the "resettlement" of Italian Jews to death camps in Poland.

The U.S. launches an air raid on the Japanese base on the northern Solomon island of Bougainville.

October 19: Some 5,000 seriously wounded German POWs and about the same number of British captives are heading home after the first British-German prisoner exchange of the war.

October 19-30: Allied foreign ministers meet in Moscow. They confirm the May 1944 date for the invasion of France, and agree that the Soviets will join the fight against the Japanese once the Germans are neutralized. They also announce plans for the postwar trials of war criminals. The Soviet Union promises to join a new international organization to keep the peace.

These news headlines and images describe other important events of 1943, including U.S. operations on Bougainville, one of the Solomon Islands.

America enjoys Pacific triumphs: The turn of the strategic tide in the Pacific began in 1942 with the decisive U.S. naval victories at the Coral Sea (May) and Midway (June), followed by the successful operations on Guadalcanal from August. The subsequent "island-hopping" campaign concluded with the end of Japanese resistance on Okinawa on June 22, 1945. Other notable Allied successes during a consistently hard-fought series of amphibious landings and battles were Kokoda (1942); Bougainville (1943); Saipan, Guam, and Leyte Gulf (1944); and Iwo Jima and Corregidor (1945). Meanwhile, from November 1944, the capture of the Marianas enabled U.S. bombers to fly strategic missions against Japan -- including the atomic bomb missions in August 1945.

"Sunny Jim" Vandegrift praised as commander of the U.S. First Marine Division at Guadalcanal: General Alexander Archer Vandegrift, nicknamed "Sunny Jim" for his upbeat personality and courteous style, gained acclaim as the commander of the First Marine Division at Guadalcanal. Thrown into battle before his division was fully prepared, Vandegrift earned a Navy Cross for his landing on Guadalcanal and Tulagi. Later, his stubborn defense of Henderson Field stymied the Japanese and earned him a Medal of Honor. He later commanded the First Marine Amphibious Corps in the landings at Bougainville. On January 1, 1944, he was sworn in as the 18th commandant of the Marine Corps.

American troops land on Bougainville island: U.S. troops clamber into assault boats assembling for the landing on Bougainville, the largest of the Solomon Islands. Part of the effort to neutralize the Japanese base at Rabaul 220 miles away, the landing was spearheaded by the Third Marine Division on November 1, 1943, at Cape Torokina. Though the Japanese had some 17,000 troops on southern Bougainville alone, they had not considered swampy Cape Torokina a likely target, and the landing was lightly opposed. Work began on an airfield, and U.S. Army troops were brought ashore. Futile enemy attacks on the perimeter began immediately, the last occurring in March. Australian forces took over the fighting on the island until the Japanese surrendered in 1945.

Nasty fighting seen in the Bougainville jungle: Much of the fighting on Bougainville focused on efforts to dominate valuable high ground and the few trails that traversed the swampy terrain. Roadblocks, ambushes, and terrifying patrol encounters at point-blank range in the thick jungle were routine. Japanese machine gunners sheltered in well-concealed log and earthen bunkers had to be reduced one by one by infantrymen using hand grenades, small arms, and flamethrowers.

Rookie GIs seize Makin Atoll in the Pacific: U.S. Army troops in November 1943 view a wrecked Japanese seaplane in the lagoon at Makin Atoll, which was seized along with Tarawa as part of Operation Galvanic. The operation was a stepping-stone toward the more valuable Marshall Islands. Unlike Tarawa, which lay fewer than 100 miles to the south, Makin was not heavily fortified. Only about 300 of the 800-man garrison could be considered combat troops; the rest were mostly Korean laborers. Nevertheless, it took nearly 6,500 men from the rookie U.S. 27th Infantry Division more than three days to secure Makin.

For an outline of historical World War II events in late October 1943 and early November 1943, see the timeline in the next section.