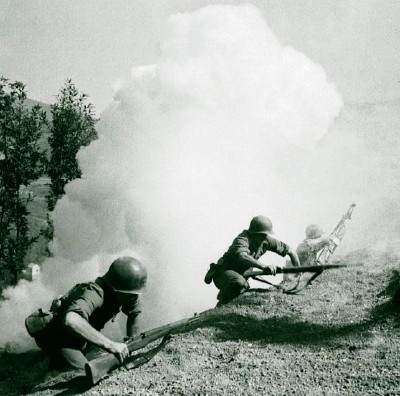 The conquest of Tarawa is just one of the history-making World War II events of November 1943. War highlights from late November-early December 1943 are included in the following timeline.

November 19: Fourteen British sailors, survivors of the mine-sunk freighter Penolver, are rescued by the American freighter DeLisle. The DeLisle promptly strikes another mine, sending the British back into the Atlantic, where they are miraculously rescued for a second time.

November 20: U.S. forces battle fierce Japanese resistance as they land on the Gilbert islands of Makin and Tarawa.

November 21: In one of the most overpowering air raids in the history of warfare, Berlin comes under assault by 775 British Royal Air Force (RAF) planes.

November 22-26: At the Cairo Conference, Roosevelt, Churchill, and Chiang Kai-shek discuss strategy for the Burma front. They announce that all areas seized by Japan since 1894 will be returned to their former owners.

November 28: Roosevelt, Churchill, and Stalin hold their first face-to-face meeting in Tehran, Iran. They restate their commitment to prepare for Operation Overlord, the invasion of France.

The Allies complete their conquest of the island of Tarawa. Some 4,600 Japanese and 1,100 Americans lose their lives in the battle.

Facing a sharp decline in the number of miners working on the home front, British labor minister Ernest Bevin decrees that one of every 10 draftees will be sent to the coal mines instead of the front lines.

The headlines and photos below provide even more insight into World War II events of 1943.

Germans fight on in Italy: Since the Casablanca Conference in January 1943, Churchill pushed for the invasion of Italy, the "soft underbelly of Europe." Roosevelt and his military advisers believed such an invasion would be an unwise distraction from preparation for the invasion of France. The third allied partner, Stalin, was also against the Italian campaign. The fighting in Sicily had not yet started when discussions were renewed about Italy. It was finally decided not to stop the offensive momentum. British and Canadian troops invaded Italy on September 3 with little opposition. Before the second landing at Salerno on September 9, the troops learned that Italy had surrendered. German troops, however, stubbornly contested the Salerno landing and every inch of the Allied advance.

The Gustav Line extends across the Italian peninsula: To block the Allied advance, Field Marshal Albert Kesselring, the German commander in Italy, constructed defenses south of Rome. The Gustav Line was the most formidable of four lines of defense that extended across the Italian peninsula. The Gustav Line was a series of concrete bunkers and artillery positions on the rocky faces of mountains fronted by a no-man's-land of barbed wire and land mines. Allied infantry, airborne, and rangers fought stubbornly along this line, as seen here.

Hitler's mistress, Eva Braun, is isolated from the war: Eva Braun, Hitler's longtime mistress, is pictured at the Berghof, the Führer's Bavarian mountain home. Isolated from the political realities of the Third Reich and the war, Braun was permitted luxuries that Hitler denied to other German women, including makeup and the use of alcohol and tobacco. Although Hitler was said to become uncharacteristically lighthearted in her presence, he never publicly acknowledged their relationship, and Braun was reportedly lonely and unhappy. Hitler and Braun finally married in a civil ceremony on April 29, 1945, the day before they committed suicide together.

U.S. Army General Mark Wayne Clark fights the Nazis in Italy: Capable but overly confident, General Mark Wayne Clark was appointed commander of the U.S. Fifth Army in 1943. His September assignment, to land his troops in the port of Salerno and direct a portion of the invasion of Italy, seemed easy enough. Mussolini had already been removed from power, and the Italian government had surrendered to the Allies. But Clark and other Allied commanders failed to grasp Hitler's determination not to lose Italy. The Italian Campaign wore on bitterly at such places as Anzio and Monte Cassino until the Fifth Army entered Rome in June 1944. The Allied commanders finally accepted the surrender of Italy's last German defenders on May 2, 1945.

Food for Russian soldiers includes bread, soup: Red Army rations varied from adequate to nonexistent depending on the supply situation. Bread and soup were staples. A type of cabbage soup called shchi was common, as was kasha, which is boiled buckwheat. Supplements included macaroni, salted fish, tea, salt, lard or bacon fat, and whatever vegetables the soldier could forage. American Spam became a common source of meat. Bread and sausage were often issued prior to combat operations since they would last for days without spoiling.

The Nazis' Atlantic Wall includes armed bunkers: From spring 1942 to 1944, Nazi Germany built fortifications along 3,000 miles of French and Belgian coastline. Called the Atlantikwall (Atlantic Wall), the defense system was designed by engineer Fritz Todt. Under the direction of Field Marshal Erwin Rommel, the wall was intended to protect Europe against seaborne Allied invasions. Defenses included 14,000 concrete bunkers armed with mortars, machine guns, and larger gun emplacements, such as this Fernkampfbatterie (distant battle battery). The beach and waters below were protected by antitank obstacles, steel "Belgian Gates" intended to damage landing craft, and six million mines.

December 1943 began with Nazi Germany's plan to intensify its bombing campaign over Britain. Find out what else happened in December 1943 by reading the timeline in the next section.