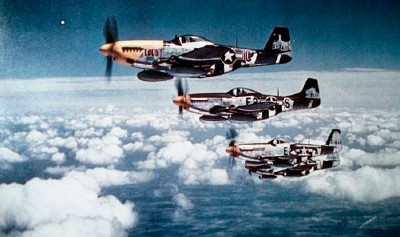 Critical World War II events in December 1943 included Nazi Germany's bombing of Britain, and the Soviet Union's new offensive against the Germans. The timeline below summarizes these and other events of the month.

December 3-7: Allied leaders return to the conference table at Cairo. They reach additional agreements about the prosecution of the war in the Pacific.

The Japanese employ poison gas in an attack on the Chinese city of Changteh.

December 5: Some 350 die in a Japanese raid on the Indian port city of Calcutta.

December 8: Some Italian forces enter combat for the Allies, as the series of battles along Nazi Germany's Winter Line in Italy intensifies.

December 11: Nazi Germany loses nearly 140 planes in a dogfight in the skies over the Emden U-boat facility.

December 12: The Soviet Union and Czechoslovakia sign a mutual assistance treaty at the Kremlin.

Hitler sends General Rommel to mobilize forces along the French coast to prepare to defend against the anticipated Allied invasion.

December 14: Having experienced success against the Germans in bitterly cold Russian winters, the Red Army kicks off a new winter offensive against Hitler's troops in the western Soviet Union.

December 16: Three German POWs and their Soviet driver are tried in Kharkov for the deaths of tens of thousands of local civilians during the German occupation of Russia. They will hang on the 19th.

Wartime news in 1943 included espionage concerns, the relocation of Soviet Union factories, and even a sexy, morale-boosting cartoon character. The headlines and photos below tell the stories.

British fear espionage by Nazi spies: When war began, the British worried about enemy agents operating from within their country. Thousands of Germans, Austrians, and Italians were arrested, questioned, and interned -- or deported to Canada or Australia. Propaganda posters featuring slogans such as "Careless Talk Costs Lives" warned against spies in public places. A Picture Post magazine photograph, dated December 18, 1943, showed "What the Well-Dressed German Wears." Apparently, a Nazi spy could be identified by his shabby, badly worn coat with broken buttons.

BBC introduces "V for Victory" campaign: During the war, the BBC transmitted information and propaganda in 45 languages, reaching every major European nation, North America, Iran, India, and Japan. Although the Nazis made listening to the BBC punishable by death, even German officials were among the millions of European fans. The BBC "V for Victory" campaign popularized the letter "V," its hand sign, and its Morse code signal (three dots and a dash). The opening bars of Beethoven's Fifth Symphony (replicating the code) became the European Service's call sign.

The speedy P-51 Mustang fighter plane refined: Although well armed, American B-17 Flying Fortress bombers were vulnerable targets for German fighters in 1943. One reason for the heavy casualties was the absence of Allied fighters with the range to accompany the B-17s to their targets. It was not until refined iterations of the P-51 Mustang fighter arrived in late 1943 that the Allies had the planes to counter Luftwaffe attacks on the B-17s. The Mustang had an auxiliary fuel tank that could be dropped when empty to give the plane greater speed. Successful in dogfights, the Mustang was also effective in ground attacks.

Britain's Avro Lancaster bombers carry the load: Britain's Avro Lancaster bombers participated in every major night raid on Nazi Germany, and carried bigger loads and heavier bombs than any other aircraft in Europe. Approximately 7,300 of the bombers were constructed by war's end. Developed from the short-lived twin-engine Manchester bomber, the Lancaster went into immediate large-scale production after test-flights in early 1941. After their first raid in April 1942, these bombers made 156,000 sorties over Europe, dropping nearly 620,000 tons of bombs. Famous Lancaster attacks included the "dam buster" raids and the sinking of the battleship Tirpitz.

Cartoon character Sexy Jane boosts GI morale: After cartoonist Norman Pett's wife, Jane, was asked to look after a "Count Fritz von Pumpernickel" -- who turned out to be a dachshund -- Pett started drawing cartoons and comic strips about Jane and Fritz. During WWII, Jane the cartoon character contributed to troop morale by shedding more and more clothes and finally appearing in the buff. The saucy, tremendously popular character was played by actress Christabel Leighton-Porter in a music-hall striptease act and in a movie.

The Soviet Union relocates its factories: Beginning in 1941, trains that moved Red Army troops to the front also transported thousands of dismantled Russian factories and millions of skilled workers eastward to safer locations beyond the Ural Mountains. Rushed into production -- often at considerable hardship to civilian workers -- factories contributed to a surge in the Soviet Union manufacture of tanks and weapons during 1942-43. Stalin had saved Russia's manufacturing capability, which meant that in 1943 tanks and other equipment made up for the Red Army's manpower shortage.

Racial mixing in Britain an issue for some GIs: Nearly 10 percent of the 1.5 million U.S. servicemen and servicewomen stationed in Britain were African Americans. As black journalist Roi Ottley reported in 1944, the British did not practice racial segregation "within the doors of the British Isles," and many British took offense at the efforts of some U.S. servicemen to impose segregation at British public events. Racial mixing, especially male-female pairings, sometimes drew violent responses from American Southerners in service.

The Allied bombing of Berlin begins: In a November 1943 letter to Winston Churchill concerning a planned bombing of Berlin, British air marshal Sir Arthur Harris stated, "It will cost Germany the war." The bombing of Nazi Germany's largest city began on November 18 and lasted until the end of March 1944. Although the attacks killed more than 10,000 civilians and left hundreds of thousands homeless, it failed to destroy the city or the morale of its citizens. In this image, bodies of citizens wait to be identified in a Berlin gymnasium decorated for Christmas.

Crew remembers Nazi Germany's Prinz Eugen as a "lucky ship": The German heavy cruiser Prinz Eugen (pictured) helped the Bismarck sink the HMS Hood on May 24, 1941, then managed to escape the British search that led to the Bismarck's destruction on May 27. From February 11 to 13, 1942, the Prinz Eugen was among the ships that made the "Channel Dash," a daring retreat through the English Channel to German home bases. Late in 1944, it began patrolling the Baltic coast, where its crew bombarded Soviet troops and evacuated German refugees. Remembered by its crew as a "lucky ship," it was the only German heavy warship to remain operational at war's end.

In the next section, see a timeline of World War II events for the remainder of December 1943, as well as related news headlines and photos.

During the Depression, women had been discouraged from entering the workforce. Now they were sorely needed to fill the many factory vacancies due to the shortage of men on the home front. Government worked with corporate leaders to launch a propaganda campaign in the media to entice women to fill critical gaps in the workforce.

The image of "," a confident, muscular woman in overalls, was created by the government to entice housewives and single women to help build warplanes. "Rosie" quickly became a familiar figure on the home front. She had her own song in 1942, was the subject of a popular painting by Norman Rockwell in 1943, and appeared in her own movie in 1944. Six million American women answered the call by 1945.

Women, however, were not appropriately rewarded for their sacrifice. Their salaries were less than half of their male coworkers', and at war's end, female workers were expected to give up their jobs and return to domestic life.