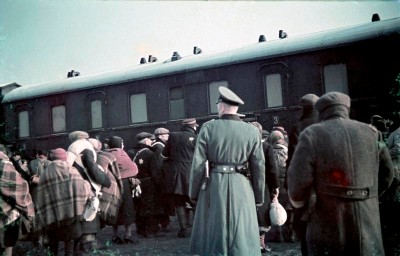 On April 15, 1942, the newest Nazi extermination camp in Poland, Sobibór, opened its gates. Learn about this and the other important World War II events that occurred during the month of April 1942 below.

April 14: The U.S. Navy "kills" its first U-boat when U-85 is attacked by the destroyer USS Roper in the Atlantic Ocean.

With Japanese forces closing in, British troops torch Burma's Yenangyaung oil fields to keep them out of Axis hands.

In an effort to minimize textile-industry labor, Britain bans the manufacture of lace on women's underwear, effective June 1.

Britain presents the strategically critical island of Malta with the George Cross, a medal given for valiant service to the Empire.

April 18: Japan is blindsided by a carrier-based bombing raid on Tokyo by 16 B-25 bombers from the USS Hornet.

April 20: The Luftwaffe destroys 30 Spitfire planes on the island of Malta.

April 21: General Henri Giraud, captured by the Nazis when they occupied his native France, makes a daring escape to Allied territory.

April 26: Adolf Hitler is empowered to act outside the laws of the Reich in dealing with his subjects when the Reichstag confers on him the ultimate title of "supreme justice," among others.

April 29: Adolf Hitler and Benito Mussolini meet to decide how to address internecine border bickering between Hungary and Romania.

Nazi saboteurs are suspected when an explosion in a Belgian chemical plant claims some 250 lives.

A critical link to China is lost when Japan's capture of Lashio, Burma, closes the Burma Road.

Below are more details that outline the events of World War II, such as the deportation of Jews to extermination camps.

Allies deliver tanks to Soviets: When Germany sent its powerful army against the USSR in June 1941, the Soviet Union dismantled and moved some of its arms factories away from highly endangered areas. That disrupted production, and by fall the nation was in urgent need of tanks and aircraft. Britain and the U.S. began supplying Russia with 400 tanks and 500 aircraft per month -- numbers that would rise as the war progressed.

Jews deported to death camps: In spring 1942, trains began transporting Jews from ghettos in Germany and its occupied nations to camps. Here, Jews board trains for deportation from the ghetto in Lódz´, Poland, to the Chelmno extermination camp in Poland in April 1942. On July 19, Heinrich Himmler accelerated the program, ordering that all Jews be "resettled" by the end of 1942 -- although the deportations would extend far beyond his deadline. In all, some 3,000 trains moved about three million people. Since this was only about 15 percent of the total trains that the Reich operated each day, the economic effect on Nazi Germany was manageable during the early years of the Holocaust.

Nazi Germans prepare boys for war: Wenn die Soldaten durch die Stadt marschieren (When the Soldiers March Through Town) was a hugely popular 1942 book of verses and pictures that portrayed children enraptured by Nazi German soldiers. The Nazi regime did more than merely romanticize the military in children's eyes. Starting in 1936, preparation for military service became mandatory for boys. If he was deemed sufficiently fit and racially pure, a 10-year-old boy began his training and indoctrination in the Deutsches Jungvolk (German Youth). He then graduated to the paramilitary organization Hitlerjugend (Hitler Youth) at age 14.

Americans committed to stopping Adolf Hitler: After the Nazi German declaration of war on the United States in December 1941, Americans committed themselves to stopping the spread of Nazi evil in Europe. Rallies such as the one in New York's Times Square on Adolf Hitler's birthday, April 20, 1942, expressed American sympathies and also boosted the sale of War Bonds, which helped finance the war effort on both fronts.

Continue on to the next page for details on the major events of late April and early May 1942.

A Deportation of Jews

On approaching Hrubieszow, we became aware of an unusual commotion; big crowds were gathered on the platform. Unsuspecting, we alighted at the station. But we soon learned that the thousands herded there were Jews: men and women, old and young, children pressed among bundles of household effects; cries and shouts of the Germans.

Four stout, red-faced Germans, arms bare, gallop on horseback along the platform, ply their whips ceaselessly, treading whomever they find in their way, vent their wrath on mothers holding babies in their arms. . . .

Suddenly a horrible scream of a woman is heard, followed by a shot. A woman with a baby in her arms keels over. She wanted to throw the baby over the fence, in the hope that it would be spared. But a moment later she and the baby are trodden to death by the horses' hooves. A deadly silence descends on the platform. I hold fast to the window-sill; I feel terribly dizzy.

-- Hava Follman, a young fugitive from the Warsaw Ghetto, describing a scene at Hrubieszow, Poland, June 1942