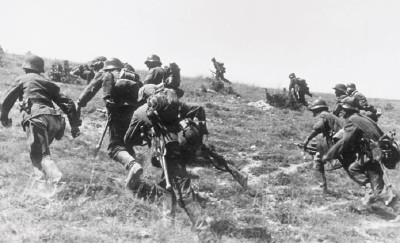 Rationing of sweets and chocolates was instituted in Great Britain on July 26, 1942. Learn about this and the other important World War II events that occurred during the month of July 1942 below.

July 23: Judenrat president Adam Czerniakow, who is charged by the Nazis with delivering 6,000 Jews a day for "resettlement" from the Warsaw Ghetto on penalty of the death of his wife and some 100 other Jewish hostages, takes his own life. A day earlier, he was unable to convince the Nazis to spare the ghetto orphans from being sent to Treblinka as part of a mass deportation of Jewish children.

July 26: British minister of food Lord Woolton institutes a sweets and chocolate rationing program that allows a half pound for every man, woman, and child every four weeks.

July 27: Hamburg is once again bombarded by the RAF. This time, some 600 planes participate in the attack.

July 28: According to President Franklin Roosevelt, no less than four million Americans are serving in the military.

With the Nazi Germans on the move on two separate Russian fronts, Joseph Stalin issues a directive forbidding retreat.

July 31: The approaches to the harbor at Charleston, South Carolina, are mined by a Nazi German U-boat.

American planes bomb Japanese positions on Guadalcanal and Tulagi in the Solomon Islands.

A Nazi "scientific" organization calling itself the Institute for Practical Research in Military Science begins to collect corpses from the Oranienburg concentration camp in an effort to study Jewish skeletons.

Below are more highlights and images that outline the details of World War II, including women in the Soviet air force and more examples of war propaganda.

Hitler's bad judgment in the Caucasus: Nazi Germany's insatiable need for oil-based products meant that the capture of the oil fields at Maikop, Baku, and Grozny remained a key strategic objective. This strategy was ostensibly sound and could have succeeded. However, from mid-1942 Nazi German combat power in the Caucasus was dissipated by Adolf Hitler's ill-judged decisions to redirect forces to the competing operations at Leningrad, Moscow, and Stalingrad. Thus, the Caucasus advance lost momentum. Characteristically, Adolf Hitler blamed his generals for this failure.

The battle for Sevastopol, Ukraine: The Nazi German campaign in the Crimea (a Ukrainian peninsula between the Black Sea and the Sea of Azov) focused on the capture of the strategically vital fortified city of Sevastopol. In a bid to prevent this, a series of landings by some 40,000 Soviet troops in December 1941 resulted in the temporary ejection of the Nazi Germans from parts of the peninsula.

However, the better quality and training of General Erich von Manstein's forces eventually led to Nazi German victory, and by July the Soviets had been cleared away by the Nazi Germans. Although the peninsula battles delayed the fall of Sevastopol by about six months, it finally fell to a Nazi German assault in July 1942 (pictured above).

The Soviet Union's female flying aces: The heavy losses of pilots sustained by the Soviet air force during Operation Barbarossa were offset by the training and employing of hundreds of women as combat pilots. Marina Raskova, an already famous Soviet aviator, organized three all-female air combat units. Another combat flying ace was Lilia Litvak, the "White Rose of Stalingrad," of the 586th Women's Fighter Regiment. Then there was Natalya Meklin of the 588th Women's Night Bomber Regiment (known to the Nazi Germans as the "Night Witches"). Meklin flew more than 800 night-bombing missions and was honored as a "Hero of the Soviet Union."

Red Army greatly improved in 1942: By the second summer of the "Great Patriotic War," the Red Army was finally experiencing a renaissance after its ignominious defeats of 1941. Previously, years of centralized political command and control had stultified operational effectiveness and emasculated the officer corps, but now various aspects of this policy were progressively relaxed or revised. Some 500,000 battle-proven, front-line soldiers were quickly trained as commanders, while new radio equipment reduced the army's traditional reliance on landline communications. Meanwhile, thousands of new artillery guns, rocket-launchers, tanks, trucks, assault guns, and automatic weapons at last began entering service.

Postcards used as propaganda: Britain, Nazi Germany, Italy, and other nations used postcards as wartime propaganda tools. Some cards vilified the enemy, stirred patriotism, or celebrated victories. In other cases, postcards with faked origins and images were dropped into enemy countries to cause dissension among citizens. The Soviets faked dozens of Nazi German postcards with the message that soldiers had been lied to by Adolf Hitler and the only Lebensraum they would find in the Soviet Union would be their own graves. This 1942 Soviet postcard glorifies the Soviet victory over Nazi German troops outside Moscow.

Britain's alters military training and establishes new "battle schools": The fall of France and the evacuation of the British Expeditionary Force from Dunkirk in June 1940 prompted significant changes in the organization and training of the British Army and Royal Marines, as Britain prepared for a protracted conflict. Based on the combat experience gained by many officers in France, realistic, imaginative, and physically demanding "battle schools" were established. These schools supplanted the comprehensive but often predictable and inflexible training regime of the prewar period.