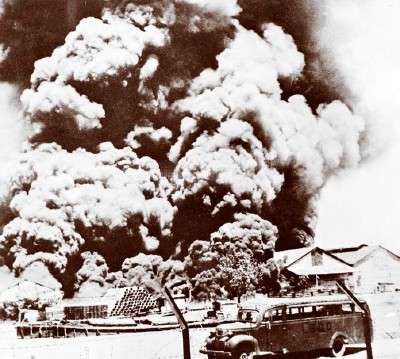 Franklin Roosevelt approved aid to the Nationalist Chinese on February 7, 1942. Learn about this and the other important World War II events that occurred during the month of February 1942 below.

February 1: Japanese bases on the Gilbert and Marshall islands come under attack by more than 90 carrier-based U.S. warplanes.

Japan presses Britain to surrender control of Singapore, the crown jewel in the British Asian empire.

February 6: British and American officials meet in Washington, D.C., for the first conference of the Allied Combined Chiefs of Staff.

The United States counterattacks a reinforced Japanese force on the island of Luzon, Philippines.

February 7: A congressional call for $500 million in aid to the Nationalist Chinese gets Franklin Roosevelt's stamp of approval.

February 11: London questions Vichy France's assertions of neutrality, revealing that France has supplied Nazi German forces in North Africa with more than 5,000 tons of fuel over the past three months.

February 11-13: The Nazi German navy humiliates the British with the perfect execution of Operation Cerberus, also known as the "Channel Dash." Unable to return from Brest, France, to their home ports via the British-controlled Atlantic route, the Nazi German battleships Scharnhorst and Gneisenau and the cruiser Prinz Eugen make an audacious escape up the English Channel.

Below are more highlights and images that outline key events of World War II, such as Japan's air raid on Surabaya, Java.

Adolf Galland, the Wehrmacht's youngest general: Adolf Galland, probably the best-known Luftwaffe ace of the war, led a fighter group during the Battle of Britain that accounted for 103 aircraft "kills." By late 1941, he was commanding the Luftwaffe fighter arm. In late 1942, he became the Wehrmacht's youngest general (age 31). Despite his youth, he consistently demonstrated impressive organizational and intellectual abilities. Galland's well-founded advocacy of using the Luftwaffe tactically rather than strategically was fully in line with the air-warfare policies of Hermann Göring and Adolf Hitler. He was dismissed in January 1945, and was later shot down and captured while commanding an Me 262 jet fighter squadron.

Fifteen RAF Blenheim squadrons were in service by 1939, with a much-improved "long-nose" Mark IV version introduced that year. Used for low-level daylight bombing raids in 1941-1942, almost 600 of 1,012 RAF Blenheims were lost -- 403 to enemy action. They were finally withdrawn from service in late 1942, and were replaced progressively by Boston, Ventura, and Mitchell bombers.

Japan goes after Java's oil: Clouds of smoke roil into the sky following an air raid on Surabaya, Java, in the Dutch East Indies (now Indonesia) in February 1942. The Japanese had long coveted the region's vast oil fields and refineries, and they moved to occupy Java soon after the fall of Singapore. An Allied attempt to turn away the Japanese invasion fleet failed in the seven-hour Battle of the Java Sea on February 27. Five Allied warships were sunk in the melee, while the Japanese lost only a single destroyer.

See the next page for details of the other significant World War II events that occurred during February 1942.

The Siege of Malta

Britain had held the central Mediterranean island of Malta since the Napoleonic wars. Malta was already a vital naval base, as its aircraft commanded the sea lanes between Italy and North Africa. Britain had to hold Malta to win a Mediterranean war.

Shortly after Italy entered the war in June 1940, Malta came under bombing attack. At first, the island's only air defense was three Gladiator biplanes, named Faith, Hope, and Charity. The Nazi Germans joined the fighting in early 1941, and raids intensified in early 1942. By April 1942, Malta had received twice the tonnage of bombs dropped on London during the entire Blitz. Nearly 1,500 civilians were killed.

With the island under siege, the Royal Navy deployed a high proportion of its strength to protect convoys headed for Malta in the face of heavy Nazi German and Italian air attack. In nine epic convoy battles, Axis warships, bombers, submarines, and E-boats attacked Allied merchant ships making the Malta run. Though starved, Malta survived. When Winston Churchill came to suspect that the island's commander was considering a surrender, he replaced him with General Lord Gort, who would never surrender.

Meanwhile, Malta became the base for British naval and air force attacks on Axis convoys that tried to get supplies (especially fuel) to support Erwin Rommel's Afrika Korps in Libya and Egypt. Using "Ultra" intelligence (which gave precise details of ships and cargos), Malta-based submarines and bombers starved Rommel of vital supplies.

Why was Malta not invaded and taken? A Nazi German plan, Operation Hercules, was devised, but Adolf Hitler -- having seen his airborne force badly hurt on Crete -- refused to risk it again. The refusal to run this risk allowed British forces based on Malta to make a decisive contribution to the outcome of the war in the Mediterranean and North Africa.

In 1942 King George VI recognized the courage and endurance of Malta's civilians by awarding the island the George Cross, Britain's highest award for civilian gallantry.