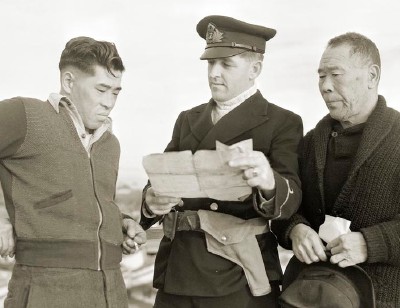 More than 270 Allied merchant vessels were lost during March 1942. Learn about this and the other important World War II events that occurred during 1942 below.

February 23: In the first Japanese "attack" on the American mainland, a Japanese submarine surfaces at night off Ellwood, California, near Santa Barbara. It fires on an oil derrick, damaging a catwalk but little else. Much local panic follows for a few days.

February 26: Joseph Stalin makes the first of many requests to the American and British command to open a second European front against the Nazi Germans so as to relieve some of the pressure on the Red Army.

February 27: Japan launches an assault on the Andamans, a chain of islands on India's Bay of Bengal.

February 27-March 1: Ten Allied warships are sunk during the disastrous Battle of the Java Sea. With the Allies suffering one of the worst wartime defeats at sea, Japanese ships are left to roam Indonesian waters at will.

March 2: The U.S. government bans all Japanese Americans from all of two and portions of three Pacific coastal states.

March 8: The Japanese take the Burmese capital of Rangoon.

March 9: The Japanese seize the Indonesian island of Java from the Dutch.

Below are more highlights and images that outline the events of World War II and provide details on Japanese internment during World War II.

Japanese Americans report to internment camps: In response to dire warnings from the military and rising panic among ordinary citizens, the U.S. government in February 1942 began evacuating people of Japanese ancestry from Pacific Coastal areas. About 8,000 Japanese Americans voluntarily left, and another 120,000 -- 72,000 of whom were U.S. citizens -- were forcibly relocated. Japanese Americans were held under guard at assembly centers, where their baggage was inspected for forbidden items, such as cameras, shortwave radios, and guns. They were then bussed to camps east of the Sierra Nevada Mountains.

Life in the Japanese internment camps: Japanese Americans were relocated into barracks in such locations at Manzanar, California. Since the internees knew nothing about where they were being taken, most did not have suitable clothing for the extremes of heat and cold in their new locations. Each family was assigned a 20' X 25' living space, and they shared communal latrines and showers. Confinement to barbed-wire fenced camps that were overseen by armed guards and watchtowers was psychologically devastating to people who considered themselves good Americans.

Canada interns Japanese: Above, an officer of the Royal Canadian Navy questions Japanese Canadian fishermen. When Canadians became afraid that fishermen of Japanese ancestry might be charting the Pacific coastline for the enemy, the government confiscated all Japanese fishing boats. In early 1942, Canada interned the nearly 23,000 Japanese Canadians who lived in British Columbia -- about three quarters of whom were citizens -- in 10 camps scattered throughout the nation. At first, men and women were incarcerated separately. Later, families were allowed to be together if the men agreed to fill labor shortages on sugar beet farms.

The next page outlines some of the other major events that occurred during March 1942.

In February 1942, President Franklin Roosevelt signed Executive Order 9066, paving the way for the forcible removal of Japanese Americans from the West Coast. Fear and anger over the attack on Pearl Harbor and concerns about potential sabotage spurred FDR to take action. So did concerns about a Japanese landing as well as intercepted and decoded Japanese messages that pointed to instances of disloyalty.

About 110,000 people of Japanese descent, more than 60 percent of whom were American citizens, were relocated to 10 inland War Relocation Camps. Limited to taking only what they could carry, the internees lost homes, businesses, and personal possessions.

Camp life was spartan. At Manzanar, located in California's arid Owens Valley, about 10,000 internees lived in 100-foot-long barracks that were divided into six one-room apartments. Those who lived in each block of 14 barracks shared latrine, bath, and eating facilities -- all behind barbed wire and under guard. While numbers of Nazi German and Italian aliens were also interned during the war, their detentions did not approach those of Japanese Americans in scope or severity.

In 1988 President Ronald Reagan apologized on behalf of the government for the internment of Japanese Americans, which a federal commission had stated was the result of "race prejudice, war hysteria, and the failure of political leadership." Beginning in 1990, reparations were paid to surviving internees.