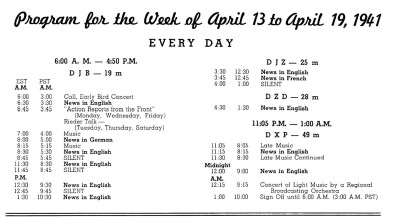 The British Royal Air Force (RAF) attacked Hamburg, Germany, with more than 270 bombers on April 8, 1942. Learn about this and the other important World War II events that occurred during the month of April 1942 below.

April 1: Vital supplies reach the Soviets, as 14 of the 19 ships of the first Arctic convoy successfully make it to the Soviet port of Murmansk.

April 3: Some 2,000 Burmese civilians die during a Japanese air raid on Mandalay.

April 4: Adolf Hitler orders the Baedeker raids. Named after a series of tourist guides, the raids will be specifically targeted to inflict maximum damage on Britain's most important historic sites.

April 6: Japanese troops land at Bougainville in the Solomon Islands.

April 7: The air raid sirens on Malta sound for the 2,000th time since the beginning of the war.

April 8: In one of the most intense air raids of the war, the RAF attacks Hamburg, Germany, with more than 270 bombers.

A new lifeline is opened to China with the inauguration of U.S. Air Ferry Command service over the Himalayan mountain range.

April 9: Soviet general Mikhail Yefremov takes his own life rather than suffer the shame of surrendering to the Nazi Germans.

The atrocity that will become known as the Bataan Death March begins with the surrender of more than 78,000 exhausted and starving American and Filipino troops in the Bataan Peninsula. In an effort to get them to the nearest railhead, their Japanese captors will force-march the prisoners some 65 miles. Eleven thousand of the captives will be killed or will perish along the way.

April 11: The first 8,000-pound bomb is dropped on Essen, Germany, by a Halifax bomber. It is not known if the bomb reached its target or what damage it caused.

Below are more highlights and images that outline the events of World War II, including Japanese bombings in Australia, German bombings in England, and the American raid on Tokyo.

German shortwave radio broadcasts to North America: This program guide, titled "Germany Calling," lists German shortwave radio broadcasts to North America for April 13 through April 19, 1941. In addition to German versions of international news, the schedule included such programs as America Asks -- Germany Answers (purported to be answers to questions from American listeners), German Contributions to Making America, and From the German Heart, as well as commentary from the infamous "Lord Haw-Haw."

The Baedeker Raids destroy historic sites: The 15th-century Old Boar's Head Inn in Norwich, England, was damaged in an April 1942 Luftwaffe raid. Nazi Germany bombed the picturesque English towns of Exeter, Bath, Norwich, and York. Nazi propagandist Baron Gustav Braun von Sturm declared, "We shall go out and bomb every building in Britain marked with three stars in the [German-published] Baedeker [travel] guide." These Baedeker Raids on England -- which included Canterbury and other nonstrategic historic sites -- took lives and destroyed property. However, the heavy toll on the Luftwaffe revealed the German bombers' limitations.

The Flying Tigers assist in war effort: The P-40 Tomahawk fighters were operated by the American Volunteer Group (AVG), more popularly known as the Flying Tigers. Commanded by Claire Chennault, the AVG was comprised of American military pilots who had "resigned" from the service in order to fly against the Japanese in China. In their first encounter on December 20, 1941, the AVG shot down three or possibly four Japanese bombers. Though their overall impact was limited, the AVG provided some deterrent to Japanese airpower over the next several months. The Flying Tigers were incorporated into the U.S. Army Air Force in 1942.

American Claire Chennault helps Chiang Kai-shek: A native of Louisiana, Claire Chennault learned to fly during World War I and remained in the service for two decades afterward. However, he was unpopular in the U.S. military because of his acerbic criticism of accepted fighter tactics, and he retired in 1937 with the rank of major. He then was hired by Chiang Kai-shek to revamp the Chinese air force, and he became a lifelong supporter of the Nationalist general. After the U.S. entered the war, Chennault was promoted to general and given command of the 14th Air Force.

Australia's leader John Curtin galvanizes the nation: John Curtin of the Labor Party became prime minister of Australia in October 1941. Curtin was a pacifist before the war, and his cabinet was short on military experience. Nevertheless, the Pacific war enabled him to galvanize the nation in 1942-1943. His insistence that the Seventh Division be returned to Australia -- and not Burma, as Winston Churchill wanted -- proved wise and saved Port Moresby when the Japanese tried to take it by a land assault.

Curtin announced in December 1941 that Australia looked to America rather than Britain for support. He welcomed the appointment of General Douglas MacArthur as supreme commander of Allied Forces in the South West Pacific Area and proved amenable to the American's direction. Against his party's traditions, John Curtin promoted labor and military conscription. He died in office in July 1945.

Japanese bomb Port Darwin, Australia: On February 19, 1942, some 200 Japanese warplanes dropped more bombs than they had on Pearl Harbor in two waves of attacks on Port Darwin, Australia. They sank eight ships, devastated structures, and killed at least 243 people in a population of about 2,000. The unprepared Australian government reaffirmed its intention to rely on the American military rather than the British, and U.S. general Douglas MacArthur promptly established his headquarters in Australia.

James Doolittle prepares for raid: A former racing and stunt pilot, Lieutenant Colonel James Doolittle had been directed to look into the feasibility of flying medium bombers off an aircraft carrier to attack Japan. Doolittle worked out the takeoff requirements, weight limitations, and necessary fuel, and arranged for special equipment and training for the all-volunteer force. Eager to get into combat, he volunteered to personally lead the dangerous mission.

Doolittle Raid affects both Japanese and American morale: This aerial photo, snapped during the Doolittle Raid, reveals ships moored in Tokyo Bay. Most of the B-25s arrived over Tokyo just after noon on April 18. They targeted an oil tank farm, steel mill, and power plants. Other bombers hit targets in Yokohama and Yokosuku. All the B-25s survived the actual raid, except for one that crash-landed in China after it ran out of fuel. Though minimal damage was done to the targets, the harm to Japanese morale was immense. By contrast, the raid lifted American spirits, which had been at low ebb following a string of Allied military defeats.

Doolittle raiders take off from aircraft carrier: Army pilots had practiced short takeoffs from dry land, but none had ever tried it from a heaving carrier deck. The force for the Doolittle Raid was comprised of 16 modified bombers, each carrying five crew members, four bombs, and extra fuel. An encounter with a Japanese picket boat forced the Doolittle Raiders to launch earlier than planned. Aided by a 50-mph headwind, all the B-25s got safely into the air, though many hung perilously close to the waves before gaining altitude.

Reprisals after the Doolittle Raid: Chinese Nationalist leader Chiang Kai-shek had been reluctant to allow the U.S. bombers to land in China following the Doolittle Raid, fearing that harsh Japanese reprisals would result. Events proved him correct. Less than a month after the raid, the Japanese army launched the operation Sei-Go. Japan intended to seize Chinese airfields within range of the home islands and take vengeance on villages that aided the airmen. As many as 250,000 civilians were killed in the Chekiang and Kiangsu provinces during Sei-Go.

Find out about the major events during the remainder of April 1942 on the next page.

On April 18, 1942, 16 B-25 bombers lumbered off the deck of the American aircraft carrier Hornet and turned toward the Japanese coast, more than 600 miles away. Their top-secret mission: to carry out the first attack of the war on the enemy homeland.

Leading the raid was 45-year-old Lieutenant Colonel James Doolittle, a modest but highly capable officer who owned all the major aviation racing trophies of his day as well as a Ph.D. in aeronautical engineering from MIT. Doolittle's airmen were volunteers who knew only that they had signed on for a "dangerous secret mission." Details would be revealed after they were at sea.

The bombers were fitted with extra fuel tanks, and the fliers practiced taking off from shortened runways intended to simulate a carrier flight deck. Since the B-25s were too cumbersome to land on a carrier, their missions would be one-way, with the bombers continuing on to secret airfields in China.

Doolittle intended to launch about 400 miles from the coast, but an encounter with a Japanese picket vessel 600 miles out forced an earlier departure. All 16 B-25s got airborne and bombed various military and industrial targets, most located in Tokyo, before fleeing toward China. Short on fuel due to the early launch, the crews of 15 planes either crash-landed or bailed out. One bomber landed in Vladivostok, Russia, where the five-man crew was interned.

Of the other 75 raiders, one man was killed bailing out, two drowned after crash-landing in the water, and eight were captured by the Japanese. Three prisoners were executed. Another died of malnutrition while in captivity. The other fliers evaded the Japanese and found refuge with the Chinese Nationalists. Upon his return home, Doolittle was awarded the Medal of Honor.

While the material damage inflicted was minimal, the Doolittle Raid lifted Allied morale and stunned the Japanese, who had grown complacent with victory after victory. No longer could the Japanese pretend that the homeland was inviolate.