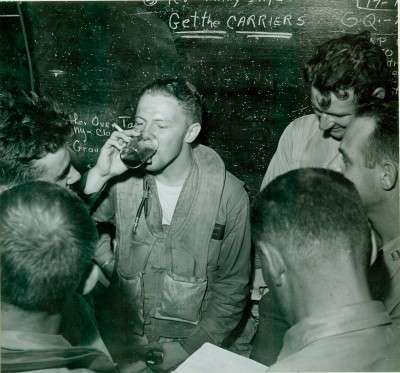 World War II events following the invasion of Normandy included the Allied bombing of Cherbourg, France, and a heavy blow to the Japanese in the Battle of the Philippine Sea. The timeline that follows summarizes these and other events of the latter part of June 1944.

June 15: Operating out of Chinese bases, American B-29 long-range bombers attack the Japanese island of Kyushu, damaging a steel plant that is a key supplier for the imperial war effort.

June 19-20: The U.S. Navy deals a heavy blow to the Japanese, and their naval air fleet in particular, in the Battle of the Philippine Sea. U.S. losses are relatively small, while the incapacitated Japanese fleet is forced to retreat to Okinawa.

June 22: The Allies bomb the French city of Cherbourg after a warning, delivered a day prior to the occupying German force, is met with silence.

President Roosevelt signs the GI Bill of Rights, a wide-ranging veterans benefits package that will become the catalyst for the "American dream" ideal of the 1950s.

Keeping an eye on the postwar prize, the Soviets establish a puppet Communist government in Chelm, Poland. The new body is called the Polish Committee of National Liberation.

June 27: The U.S. Army occupies the French city of Cherbourg two days after naval bombardments and street fighting began to engulf the city.

June 28: Philippe Henriot, the Vichy minister of information who was known as "the French Goebbels," is murdered in his bed by members of the French Resistance.

June 29: In a meeting with his top commanders at Berchtesgaden, Hitler refuses to listen to their bleak reports on the state of the war. They leave enthused by his comments.

Making the news in June 1944 were the Battle of the Philippines, the American GI Bill, and more. Read summaries of these noteworthy events below.

Congress passes the GI Bill: in June 1944, the U.S. Congress passed the Servicemen's Readjustment Act, more popularly known as the GI Bill of Rights. The House of Representatives had attempted to scale down the bill's provisions, but after much negotiation, the House finally passed it almost intact. The act was signed into law by President Roosevelt on June 22. Two of its major provisions were low-interest home loans and educational benefits. The home loans, utilized by 2.4 million returning veterans, would help to develop America's suburban landscape and personal wealth. The educational provision would give colleges the financial boost to expand programs and enrollment. By 1951, 2.3 million GIs would attend colleges and universities of their choice, 3.5 million would receive educational training, and 3.4 million would take part in on-the-job training.

British children traumatized by bombing raids over London: British youngsters were traumatized by bombing raids, separation from their families, and the deaths of parents. Some children were killed or wounded. "We sat there listening to German planes coming over the shelter on their way to London and we then had to stay there until they came back," Margaret Hoffman later wrote about the 1944 air strikes.

This article's timelines, headlines, and photos detail the World War II events of January 1944-June 1944, providing a comprehensive overview of preparations for -- and the execution of -- the seminal D-Day invasion.

Battle of the Philippine Sea

Thrown on the defensive in the Pacific by 1944, the Japanese navy pinned its hopes on a decisive fleet engagement to revive Japan's fading fortunes. Planners hoped to fight this decisive battle around the Palaus Islands and the Western Carolines, but the U.S. landings on Saipan on June 15 dictated otherwise. Combined Fleet commander Admiral Toyoda Soemu ordered the First Mobile Fleet to the Marianas.

Led by Vice Admiral Ozawa Jisaburo, the Japanese force was built around nine carriers. They would face 15 U.S. carriers, but Ozawa expected land-based aircraft from Guam and other island bases to reduce those odds before the naval engagement began. In fact, unbeknownst to Ozawa, U.S. carrier planes were neutralizing these land-based forces even as his fleet steamed into battle.

Believing erroneous Japanese claims that the U.S. fleet had already suffered serious losses from land-based air forces, Ozawa launched his carrier attack on June 19. More than 450 aircraft went after the U.S. Fifth Fleet, only to run into a buzz saw. Because the Japanese pilots were inexperienced, U.S. Grumman Hellcat fighters and massed antiaircraft fire wreaked havoc on the enemy. The Japanese lost 330 planes in the lopsided five-hour exchange, derisively dubbed the "Great Marianas Turkey Shoot" by American pilots. Also lost were the carriers Taiho and Shokaku, sunk by American submarines Albacore and Cavalla. The U.S. task force lost a total of 31 planes to all causes.

Left with about 100 aircraft, Ozawa withdrew. The next afternoon, operating at the far extent of their range, U.S. aircraft shot down 65 more Japanese planes, sank the carrier Hiyo and two oilers, and damaged two carriers and a battleship. About 80 U.S. planes were lost on the return when they ran out of gas and ditched or crashed, but more than half of the crew members were rescued.

The cost the Japanese 476 planes and about 450 pilots. The Japanese carrier air arm never recovered from this mortal blow.