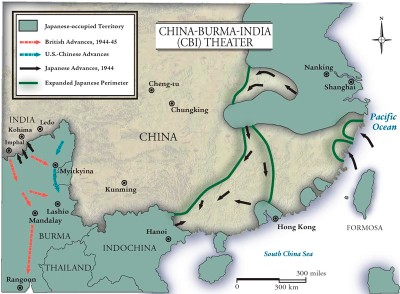 Notable events of March 1944 include the deaths of thousands at Nazi Germany's Auschwitz-Birkenau death camp. For more on World War II history from this period, follow the timeline below.

March 7: The British House of Commons debates whether popular singers, singing about the hardships of war on the BBC, damage morale on the front.

The gas chambers at Auschwitz-Birkenau claim more than 3,800 Jewish deportees from the Theresienstadt Ghetto.

March 11: In the first of what will be many trials of French "collaborators" (French men and women who aided and abetted the Nazis), Vichy interior minister Pierre Pucheu receives a guilty verdict and a death sentence.

March 12: Czechoslovakia's government-in-exile sends a message to Czech citizens back home to revolt against the occupying Nazis.

Britain suspends travel between England and Ireland two days after Ireland denies an Allied request to close down Axis consular offices that effectively serve as espionage operations for Axis nations.

March 14: In Nazi Germany, Wernher von Braun (a future NASA star) is detained temporarily for spending time and money on projects that have little to do with the imperialist aims of the Reich.

March 15: Responding to Hungary's recent flirtation with the Allies, German troops stage along the border, forewarning an invasion.

March 16: Oswald John Job, at age 59, becomes the oldest person to be executed under the terms of Britain's 1940 Treachery Act. Job had passed secrets to the Nazis in letters using invisible ink.

The following headlines include information on the Allies' success in Burma and the importance of ships to the war effort. Read about these and other newsworthy items from 1944.

Allies ultimately prevail in Burma campaign: The fate of the China-Burma-India region was determined by the British 14th Army's successful Burma campaign (supported by U.S.-led Chinese Nationalist forces) from mid-1944, following its victories at Imphal and Kohima. The experienced and battle-hardened Japanese had initially enjoyed some successes against the British and Indian forces from 1942 to early 1944. However, Japan's overextended logistic support system finally frustrated its strategic plans. Mandalay was occupied by the Allies in March, and Rangoon fell in May. The Japanese forces in Burma eventually surrendered on August 28, 1945.

Allies advance in India, Burma: Alarmed by the buildup in Allied strength in late 1943, the Japanese launched an offensive against Imphal and Kohima in northeastern India in order to cut the railway that supplied "The Hump" airlift to China. After hard fighting, the Japanese conceded defeat by early July and retreated, having suffered 55,000 casualties. It was the largest Japanese defeat up to that time. Elsewhere, Chinese divisions commanded by General Joseph Stilwell were on the attack in the Ledo area of Burma, and in mid-April 1944 Chinese divisions mounted an attack on the Yunnan front. Hard-pressed, the Japanese retreated. By the time monsoon season arrived in 1944, the Allies were poised to recapture Burma.

French Resistance commits act of sabotage: A train car sits atop the remains of an engine in Saône-et-Loire, France. Such acts of sabotage by the French Resistance were among the most effective tactics against German occupation. From January to September 1943, the number of attacks on railroads leaped from 130 each month to 530, greatly reducing German mobility in France. French factories used for German military production were also frequent targets. In addition to committing acts of violence and sabotage, the French Resistance also supplied intelligence to the Allied powers -- information that proved especially crucial on D-Day.

Henry Kaiser, father of American shipbuilding, cranks out ships for the war effort: Known as the father of modern American shipbuilding, Henry Kaiser owned seven shipyards during the war. Using an assembly-line process, his yards could build a Liberty ship in five days, although most took two to three weeks. Kaiser began producing ships for the U.S. Maritime Commission in the 1930s. He expanded his production facilities with orders from England following the start of the war. In all, his shipyards built 1,490 vessels for the war effort.

Both the Japanese and the British Royal Air Force suffered significant losses in March 1944. Read about these and other World War II events in the next section.