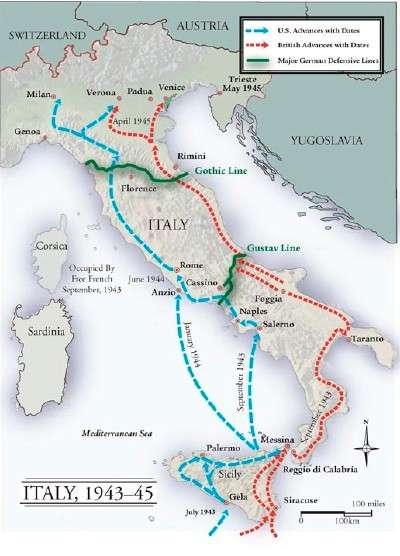 Allied actions in April 1944 included the destruction of Nazi Gestapo headquarters and a massive bombing campaign in Hungary, Yugoslavia, and Nazi Germany. More notable events from this time appear in the following timeline.

Soviet Union troops invade Romania, with a plan to recapture the oil-rich nation for the Allies.

April 3: With the Nazi Germans in control of Hungary, the Allies revoke their promise to spare the country and attack German positions in the capital of Budapest.

April 6: In Britain, the dramatic increase in the number of wage-earning citizens leads the government to introduce pay-as-you-earn taxation, whereby an employer deducts a set amount from an employee's paycheck per pay period.

April 7: The Soviet Union declines a renewed Japanese offer to negotiate a separate peace between the Nazis and the Russians.

April 10: The Red Army reclaims Odessa, an important Soviet port on the Black Sea, from the retreating German army.

April 11: The RAF destroys the Gestapo's headquarters in The Hague, including files on individual Dutch nationals scheduled to be deported to the Nazi camps.

The battle for control of Italy continued in 1944. Read about this and other World War II headlines below.

The fight for Italy continues: The Allies' success in North Africa enabled them to invade Sicily in July 1943 and Italy in September. But despite an Italian armistice on September 8, the Germans continued to fight on determinedly. Due to the impending Allied invasion of Northern Europe, the Italian campaign was consistently accorded a lower priority by the Allies, and consequently was often under-resourced. The strategic failure of the landing at Anzio exemplified this and other Allied deficiencies. Meanwhile, the German defense of Cassino was particularly tenacious. Nevertheless, the Allies advanced relentlessly northward, smashing through the Gustav Line and the Gothic Line. The Germans surrendered in Italy on May 2, 1945.

American infantryman Ira Eaker plans bombing offensive: American Ira Eaker, an infantryman during World War I, began training as a pilot in 1918. He won the Distinguished Flying Cross in 1929 for helping set a world flight endurance record. In 1942 he was named commander of the Eighth U.S. Army Air Force based in Britain, where he led the first U.S. bomber raid on Europe. A proponent of daylight precision bombing, he helped persuade Winston Churchill to launch the Combined Bomber Offensive (also known as the Eaker Plan), in which the Americans focused on daylight bombing and the Royal Air Force conducted night bombing. He was named commander-in-chief of the Allied Air Force in the Mediterranean in late 1943.

Britain's Women's Auxiliary Air Force (WAAF) aids the war effort: Although WAAFs did not fly planes (unlike their civilian female counterparts in the Air Transport Auxiliary), their duties centered around such vital matters as weather, radar, codes, reconnaissance, and intelligence. Beginning in 1944, many WAAFs served beyond the home front, including in Europe after the invasion of Normandy.

Pope Pius XII is hailed and criticized for wartime actions: In 1943, Time magazine praised Pope Pius XII and the Catholic Church for "fighting totalitarianism more knowingly, devoutly, and authoritatively, and for a longer time, than any other organized power." However, even during his life, Pius's wartime policies were controversial. Despite his muted denunciations of Nazi aggression and racial theories, the Vatican under his leadership remained officially neutral throughout the war. Pius also stirred criticism for not denouncing the Nazis' atrocities against the Jews. Members of the Church hierarchy, however, hid Jews in monasteries, convents, and the Vatican itself, saving thousands of Jewish lives.

Romans hail American liberators: Shortly before the June 4, 1944, liberation of Rome, the city had endured a week of Allied bombings that killed some 5,000 civilians. Even so, crowds of Romans grateful for an end to the Nazi occupation joyfully greeted the soldiers of U.S. general Mark Clark's Fifth Army, showering them with flowers. In his fireside chat of June 5, President Roosevelt reminded his listeners that Ancient Rome had once ruled the known world. "That, too, is significant," he said, "for the United Nations are determined that in the future no one city and no one race will be able to control the whole of the world."

Continue following World War II's history with the 1944 timeline and headlines presented in the next section of this article.