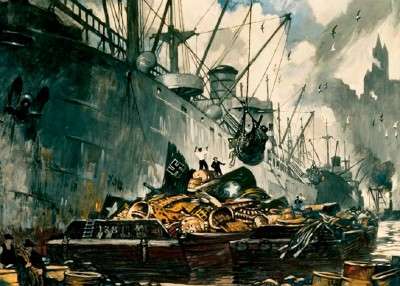 May 1943 brought massive Allied bombing over German cities, including the air raid of Dortmund. The following WWII timeline summarizes this and other major events.

May 17: The British MI6 and the American Office of Strategic Services agree to share cipher intelligence. They also agree to the designation "Ultra" for all Axis code intelligence.

Allied ships traverse the Mediterranean unmolested by Axis ships for the first time since Italy entered the war, offering tangible proof that the Axis has quit North Africa.

May 19: Peter Dönitz, son of German admiral Karl Dönitz, dies when his U-boat is sunk by the Allies.

May 19-20: The Allies heavily bomb Sicily and Sardinia as a precursor to their invasion of Italy.

May 22: The German Messerschmitt Me 262 jet plane reaches speeds of 520 mph in its inaugural test-flight, giving the Luftwaffe newfound optimism.

Joseph Stalin dissolves the Comintern in an effort to quell Allied concerns over Soviet ambitions of world domination.

May 23: The Allies attack Dortmund, Germany, with more than 800 planes, dropping more than 2,000 tons of bombs in what is the most intense air raid of the war to date. Nearly 700 civilians will lose their lives.

May 24: Dr. Josef Mengele becomes the camp doctor at Auschwitz. He will soon become infamous for conducting cruel and inhumane experiments on the prisoners.

Admiral Karl Dönitz recalls most of the German U-boats in the Atlantic after losing many of them to Allied aggression.

May 25: President Franklin Roosevelt and Winston Churchill conclude a successful summit in Washington, D.C. The meeting produces several strategic decisions regarding the continued prosecution of the war, most significantly setting the date for the invasion of France at May 1, 1944.

Below are more headlines and images of World War II events and the military campaigns of 1943.

Important American cargo ships made treacherous voyages: This painting by American artist Thornton Oakley shows a U.S. cargo ship unloading scrap materials -- indicating both Nazi and U.S. air force losses -- to be recycled. In the background, more ships wait. Cargo ships carried food, ammunition, clothing, guns, and troops. These U.S. merchant vessels came in all sizes and were outfitted with cranes for loading and unloading. They were subject to destruction by mines, battleships, bombers, submarines, and kamikaze attacks. During the war, 733 cargo ships were lost and more than 5,000 U.S. merchant seamen were killed.

Keep reading for a World War II timeline that looks at events from late May and early June 1943, including important activity from the French Resistance.

War notoriously disrupts traditional morality, and such was the case during the biggest war of all. From female teenagers jitterbugging with British airmen in Alberta, to brothels condoned or organized by armies, to rapes committed with or without official knowledge, World War II affected sexual behavior across the globe.

The demands of war made millions of lonely, fearful men and women mobile. Many found solace in relations that were more accessible than they had been in peacetime, mixing at dances or in bars. Traditional moralists decried the spread of disease and out-of-wedlock pregnancies. (Military commanders regarded sexually transmitted diseases as an efficiency problem.)

Propaganda stigmatized the "good-time girl" as dangerous, although many women felt liberated by wartime sex. Gays in the military found that service gave them unprecedented opportunities to discreetly meet other homosexuals.

In previous wars, armies in enemy territory had frequently, if tacitly, condoned rape. In this war, sex crimes involving people from Allied nations were often punished severely. However, some Allied forces (especially French colonial troops and New Zealand Maoris in Italy) gained a reputation for sexual brutality. Soviet troops in Germany used rape as a weapon of terror and revenge against literally millions of hapless German women in 1945.

When large numbers of well-paid servicemen arrived in impoverished countries, prostitution became rampant. The practice was common in Egypt, Italy, and India (especially around Calcutta), as well as in Germany after its defeat.

Axis soldiers generally raped without retribution, notably in Nanking, China, in 1937, where Japanese soldiers raped tens of thousands of Chinese women. The Japanese army operated officially sanctioned brothels, in which tens of thousands of Asian women, mainly from occupied Korea, were used, mostly against their will. In 2007, Japanese Prime Minister Abe Shinzo formally apologized for Japan's treatment of Asian "comfort women" during the war.