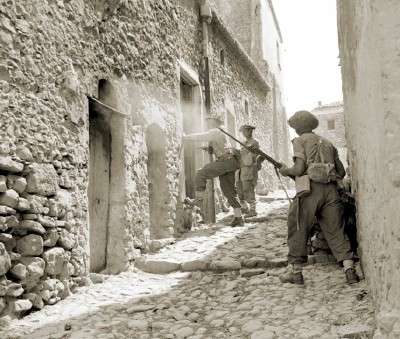 The World War II timeline below traces important events from late May and early June of 1943, including the U.S. recapture of Attu from the Japanese and a scolding of the West by the Pope.

May 29: Chinese forces arrest the progress of the Japanese army.

May 30: Almost 20 days after U.S. troops first landed on the Aleutian island of Attu, it is finally recaptured from the Japanese, who lose some 2,000 soldiers in the battle.

June 2: Pope Pius XII sends a pointed message to the Allies in which he implicitly condemns the routine targeting of civilians in "terror" bombing campaigns, although he has not commented on German bombing.

French generals Charles de Gaulle and Henri Giraud join forces in Algiers to create the French Committee of National Liberation. Their organization will act as the French authority wherever the French empire exists beyond the reach of the Nazis.

The Michelin tire plant in Clermont-Ferrand, France, is sabotaged by the Resistance, costing the Reich some 300 tons of tires.

The plane carrying British serviceman Leslie Howard, the actor who played Ashley Wilkes in the screen version of Margaret Mitchell's Gone With the Wind, is shot down by Axis planes over the Bay of Biscay.

June 6: In a speech ironically delivered a year to the day prior to the Allied invasion of Normandy, General de Gaulle insists that France does not want assistance throwing off the Nazi yoke, claiming, "We intend to win our liberty ourselves."

June 7: The Axis discovers the "Comet Line," an underground network of safe houses established in 1940 to rescue Allies trapped behind enemy lines. The houses stretched from Belgium through France, Spain, and Gibraltar.

Below are images and highlights of World War II events and the consequences of military activity in 1943.

Allied invasion of Sicily slowed by intense heat, resistance: Rough terrain and the stubborn resistance of German troops slowed the Allied advance across Sicily. Oppressive heat (100°F) also affected the advance. More than 10,000 Allied soldiers became sick with heat exhaustion and malaria. Those Allied troops who could still fight found that the enemy would not go down easily. The British capture of the town of Centuripe exemplified the intensity of combat. The British 78th Division launched its attack on the town on July 31, and needed four days of treacherous house-to-house fighting to finally capture it.

British admiral Sir Andrew Browne Cunningham stars in Mediterranean: British admiral Sir Andrew Browne Cunningham, the naval commander-in-chief in the Mediterranean, aggressively destroyed Italian warships and ran supplies to Malta. Using obsolete Swordfish aircraft, he mounted the first all-aircraft naval attack in history at Taranto in November 1940, cutting the Italian fleet in half. When Germany seized Crete in May 1941, Cunningham insisted on evacuating 16,500 trapped Allied troops in the face of heavy Luftwaffe opposition. He commanded the Naval Task Forces during Operation Torch -- the November 1942 British-American invasion of French North Africa -- under General Dwight Eisenhower, who praised Cunningham for his intelligence, devotion, and selflessness.

As June 1943 progressed, the Allies continued their bombing of Sicily in preparation for invasion. Read about this and other major World War II events on the timeline on the next page.