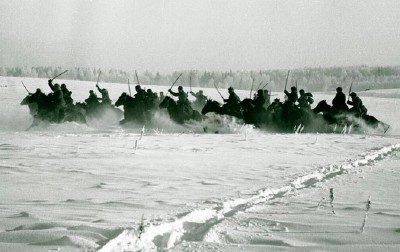 June 1943 saw the U.S. winning another major battle over the Japanese at Guadalcanal. This and other important World War II events are outlined on the World War II timeline below.

June 13: Soviet director Mikhail Slutsky and 240 camera operators shoot Day of War, a documentary record of a day on the Russian front.

Seventy-four die when the Germans drop anti-personnel bombs on Allied troops in a raid over Britain.

June 16: The U.S. enjoys a dramatic victory in the skies over Guadalcanal. An attacking Japanese force is mauled, losing 107 of 120 planes.

June 17: In an effort to reduce the number of collateral air-war casualties, the BBC warns civilians living near Axis factories to evacuate to safer ground.

June 18: The Allies "soften" Sicily with a pre-invasion bombing campaign.

June 20: For the first time, the Allies engage in "shuttle" bombing, hitting more than one target per bombing sortie and resting and refueling at remote bases between stops.

June 21: Heinrich Himmler orders the Jewish ghettos of occupied Russia emptied and their remaining occupants deported to the death camps.

Below are more images and highlights detailing important World War II events and the military campaigns of 1943.

Soviet cavalry forces prove valuable in battle: In 1946 a U.S. Intelligence Bulletin reported, "Red Army cavalry units have proven the right of the almost legendary Cossack to remain part of the armed forces of the U.S.S.R." Mounted troops such as these could move through forests, swamps, and other terrain impassable by mechanized forces. They also could avoid air attacks by operating at night. Mounted troops sometimes flanked enemy units, staging surprise counterattacks and setting up roadblocks against retreats. The cavalry filled in gaps on the battlefield and covered Soviet withdrawals. Where needed, they dismounted and operated as infantry forces.

In 1943 women comprised eight percent of the Soviet armed forces. Although many female recruits served behind the front, up to half were at the front. One source puts the total there in 1945 at 246,000. Women soldiers fought as snipers, mortar crew members, tank drivers, artillery crew, and medics. They were given few if any sanitary and medical amenities.

Female aviators won particular acclaim. Marina Raskova, a celebrated prewar aviator, took the initiative in the creation of the all-female Aviation Group 122 in October 1941. It trained air and ground crews for three regiments -- the 586th Fighter, 587th Bomber, and 588th Night Bomber. Among them, these units flew 30,000 combat missions and produced at least two aces, including Lilia Litviak. The 587th and 588th received the coveted "Guards" appellation as elite units.

Other women served in mixed aviation regiments, and 33 Soviet female aviators received the title "Hero of the Soviet Union." So did some 57 other women. More than 100,000 women received one or more Soviet decorations. The nation regarded its use of women combatants as temporary. After the war, the women were rapidly demobilized, passing into historical obscurity.