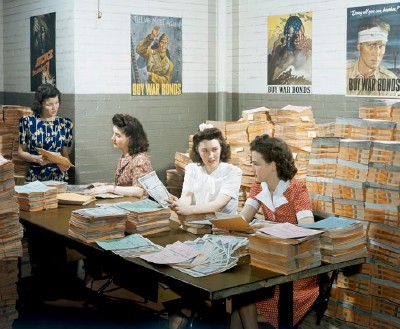 In late April 1943 Britain launched the deceptive Operation Mincemeat, ultimately fooling Adolf Hitler in a major strategic victory for the Allies. This and other events from World War II are summarized on the following timeline.

A United States force reaches Alaska and begins its assault on the Japanese-held Aleutian island of Attu.

April 30: The British launch Operation Mincemeat by releasing a corpse -- which is dressed as a British officer and carries falsified war plans -- off the coast of Spain. The "plans," which indicate that the Allies will attack Greece and Sardinia, and not Sicily as long suspected, will successfully divert Axis defenses from several key fronts.

May: War shortages affect civilians on both sides of the Atlantic, as Canada introduces meat rationing while Nazi Germany further reduces the size of existing rations.

Due to improved Allied interception technology, Nazi Germany will lose a third of its U-boats out on patrol this month. This leads German admiral Karl Dönitz to implicitly concede an Allied victory in the Battle of the North Atlantic when he repositions his fleet to the south.

May 1: German and Italian forces retreat in Tunisia.

May 2: The war reaches Australian shores once more when Japanese aircraft pound the port city of Darwin in the Northern Territory.

May 7: A day after destroying Germany's 15th Panzer Division, the Allies score a major victory with the fall of the Tunisian capital of Tunis. Approximately 250,000 Axis soldiers will surrender in the upcoming days.

The following headlines and images detail events of World War II and the 1943 activity of the Allies and Nazi Germany.

U.S. bonds finance the war: Treasury Department workers such as these received, checked, and counted a million Series E bonds daily, sealing them into packages of 4,000 for distribution. Sold at 75 percent of its face value, a "war bond" matured in 10 years to $25, $50, $75, $100, $200, $500, $1,000, or $10,000. War bonds were promoted on posters, in ads contributed by radio stations and print publications, at sports events, and via celebrity appearances. More than 85 million Americans (most of the population) spent a total of more than $185 billion on War Bonds -- at a time when the median annual income was about $2,000. The bonds helped finance the war effort and took cash out of the economy to control inflation.

Britan's Operation Mincemeat utterly fooled Adolf Hitler. On the next page a World War II timeline from May 1943 looks at the events that followed.

"Before World War II," U.S. admiral Chester Nimitz recalled, "I entertained some doubt as to the loyalty of American citizens of Japanese ancestry in the event of war with Japan. From my observations during World War II, I no longer have that doubt." The admiral's lack of trust in Japanese Americans had been shared by many at the beginning of the war.

Following the attack on Pearl Harbor, Japanese Americans were widely viewed as potential spies and saboteurs. Those of draft age were classified 4-C (enemy alien). Federal officials were more accepting of Nisei -- second-generation Americans of Japanese descent -- than of first-generation. After taking an oath of allegiance, the 100th Infantry Battalion, comprised of more than 1,400 Nisei, was activated. It fought in Italy in 1943, and suffered so many casualties that it was called the "Purple Heart Battalion."

In 1943 the 100th was assigned to the 442nd Regiment Combat Team, a segregated unit of Japanese Americans. The 442nd's motto was "Go for Broke." In 1944 the regiment saved the 141st Infantry Regiment, the "Lost Battalion" that had been surrounded by German forces in northern France. By the end of the war, the 442nd had suffered more casualties and won more medals than any other outfit of its size and length of service.

Japanese Americans also served the American armed forces in the Pacific Theater as interpreters. About 60 Nisei were being trained at the Military Intelligence Service Language School in San Francisco when Pearl Harbor was attacked. By war's end, 2,000 Nisei had served in Pacific combat zones as interpreters, interrogators, and translators. They earned the moniker "Yankee Samurai."