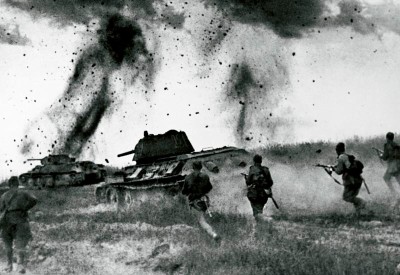 May 1943 brought the surrender of Axis forces in north Africa, a major boost in momentum for the Allies. This and other pivotal events are discussed in the World War II timeline below.

May 7: Japanese dominance on the Burma front continues unabated, as they handily capture Buthidaung from the Allies.

May 8: Operation Retribution, an Allied naval operation designed to prevent the Axis from safely retreating from the North African front, is staged in the Strait of Sicily.

Concerned by an apparent increase in resistance activities among the Dutch, the German occupation force imposes martial law throughout the Netherlands.

The Allies score an intelligence coup when a German flight crew defects.

May 13: As a prelude to a full-scale assault in Sicily, the Allies attack Pantelleria, a small Italian island about 30 miles off the Tunisian coast and strategically located in the Strait of Sicily.

More headlines and images of World War II events and the military campaigns of 1943 follow.

Soviets halt German advance: Soviet tanks, troops, and artillery stubbornly fought the advancing Germans, inflicting heavy casualties for each mile gained. As the Second SS Panzer Corps advanced on July 12 out of the town of Prokhorovka, it was met by the Soviet Fifth Guards Tank Army. About 1,200 tanks participated in this battle, the largest tank fight of the war. Although the Soviets suffered many more casualties than the Germans, the advance was halted. The Allied invasion of Sicily caused Adolf Hitler to order the Second SS Panzer Corps to Italy. Facing weakened resistance, the Soviet Union launched an offensive, which it would maintain until the end of the war.

Soviets practice scorched-earth policies: As the Nazi German Army pushed the Soviets through the Ukraine in 1941 and 1942, Joseph Stalin ordered his army and civilians to destroy anything that could be useful to the Germans, including industrial facilities, rail lines, communication lines, and shelter. The Germans practiced their own scorched-earth policy in 1943 and 1944 as they retreated through Russia and Europe. As his country was collapsing in March 1945, Adolf Hitler ordered his armaments minister, Albert Speer, to destroy any German resources not yet in Allied hands. Unknown to Hitler, Speer never carried out the order.

Nazis force Ukrainians to work in German factories: Once the German army occupied the Ukraine, it attempted to attract large numbers of workers for German factories. Failing to supply the necessary number of workers voluntarily, the occupying troops began to ship large numbers of Ukrainians to Nazi Germany forcibly. Called Ostarbeiter (East workers), about three million were eventually deported to manufacture war supplies for the German army and other work. Many died from overwork and starvation while others were killed in Allied attacks on German factories. After the war, most workers were repatriated to the Ukraine, where many were killed or imprisoned by the Soviets on political grounds or because of purported collaboration.

Keep reading for a World War II timeline that looks at events from late May 1943, including the arrival of the infamous Nazi doctor Joseph Mengele at Auschwitz.