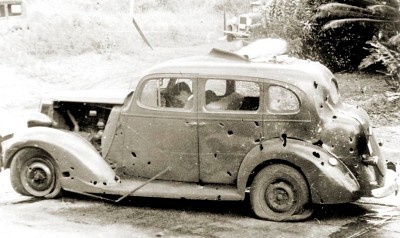 Tensions continued to heighten between the United States and Japan toward late autumn 1941. Learn about this and the other major World War II events that occurred during the end of November 1941 in the timeline below.

November 17: Lewis Clark Grew, the U.S. ambassador to Japan, sends a message to U.S. secretary of state Cordell Hull. He emphasizes the need "for guarding against sudden military or naval actions by Japan in areas not at present involved in the China conflict."

November 19: In the biggest battle of the West African desert to date, British commandos raid Erwin Rommel's headquarters but fail to kill him as planned.

November 20: Japan issues an ultimatum to the United States, demanding American noninterference in Japanese relations in Indochina and China. Franklin Roosevelt will submit an equally unlikely program for peace in the Pacific.

November 24: Erwin Rommel makes one last unsuccessful attempt to outflank the British, while the Allies capture the key supply depot of Gambut, Libya.

Congress approves an expansion of the Lend-Lease Act to include French who are not living under Nazi rule.

Nearly 860 sailors die when the British battleship Barham sinks off the coast of Crete after being torpedoed by a Nazi German U-boat.

Read on for details on some of the other significant events of World War II, including the aftermath of Pearl Harbor.

American B-17s caught in line of fire at Pearl Harbor: On the morning of December 7, 12 unarmed B-17s were on a mission to the Philippines as part of the American effort to build up that area's defenses in the hope of deterring a Japanese attack. The planes' crew members planned to stop in Hawaii for refueling and the mounting of their guns. Chillingly, they did not realize that they were on a collision course with the Japanese attack force.

The B-17s arrived at Oahu during the attack and had to dodge enemy and American antiaircraft fire. Miraculously, even though they were strafed by gunfire that wounded crew members, all of the B-17s landed intact except for one. Although it split in half, its crew survived the landing.

Civilian casualties at Pearl Harbor: Joe McCabe and three other family members, all shipyard riggers, raced in McCabe's car to the harbor as Japanese attack planes flew overhead. An explosion suddenly riddled his car with shrapnel, killing three of the men and mortally wounding the fourth.

By the end of the attack, 68 civilians had been killed and 35 wounded. Initial reports stated that the McCabe group had been killed by a Japanese bomb. It was later revealed, however, that the deaths were caused by an American antiaircraft shell. Further investigations showed that most of the civilian deaths and wounded were at the hands of Americans, not Japanese.

Mess attendant Doris Miller's heroism: Admiral Chester Nimitz personally awarded Doris "Dorie" Miller with the Navy Cross on May 27, 1942, for his actions during the attack on Pearl Harbor. Miller was a mess attendant on the USS West Virginia the morning of the attack when he carried his mortally wounded captain to a safer spot on the ship. Although untrained, he proceeded to man a .50 caliber antiaircraft machine gun until ordered to abandon ship. He died in action almost two years after Pearl Harbor.

Americans turn to President Franklin D. Roosevelt after attack: Crowds began to form in front of the White House as soon as word of the attack on Pearl Harbor was announced. The men and women were not there to picket or demonstrate. They sought reassurance from President Franklin Roosevelt that the country was safe in his hands.

Those who had supported isolationism now realized that America could not sit this war out. United States soil had been attacked and American men and women killed. They stood in front of the White House seeking both comfort and revenge.

Revisionist historians have claimed that Roosevelt had known about the attack and purposely withheld the information to provoke America's entry into the war. However, no evidence exists to support this assertion.

American men sign up for service: Hundreds of thousands of Americans enlisted in the armed forces in the weeks after the United States declared war on Japan. This number included sports figures and movie stars. "Rapid" Robert Feller, star pitcher of the Cleveland Indians, enlisted in the Navy two days after Pearl Harbor was attacked.

The next section takes us into the events of early December 1941.