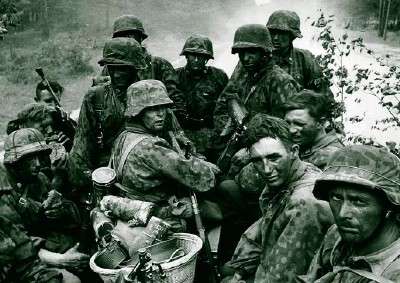 The Atlantic Charter between the United States and England was drafted on August 12, 1941. The World War II timeline below summarizes this and some other important events that occurred during the month of August 1941.

Romania kicks off the 73-day Siege of Odessa, which will end in October with the Romanian occupation of the Ukrainian city.­

August 8: The Soviets suffer a crushing defeat at Roslavl, near Smolensk, as the Nazi Germans capture some 38,000 Russian prisoners of war.

August 10: Both Britain and the Soviet Union promise military aid to Turkey in the event that Germany pursues a policy of aggression against the Eurasian nation.

The Nazi occupation force in Romania requires all Jews to make themselves available for forced labor assignments.

August 13: Chungking, China, is largely in ruins after a week of bombing at the hands of the Japanese air force.

August 16: Joseph Stalin accepts a joint proposal by the United States and Britain to meet in Moscow and develop a comprehensive plan on the aid that Britain and the U.S. will try to deliver to the Soviet Union.

August 24: In the Ukraine, Soviet forces mount an intense defense against German invaders.

Below are detailed images and headlines outlining some of the other major World War II events that took place during 1941.

Nazi Germans encircle Smolensk, Soviet Union: On July 15, 1941, a double breakthrough by Army Group Center's panzers cut off thousands of Soviet troops to the west of Smolensk and enabled the city's encirclement. Smolensk fell to an attack on July 16. Strong Soviet resistance continued in the pocket until August 5, by which time the Germans had captured some 310,000 prisoners, 3,205 tanks, and 3,120 guns.

The fighting had been particularly intense, as evidenced in this photo by the weariness of the Waffen-SS "Totenkopf"(Death's Head) troops. Following their victory, the Germans paused for two weeks for reinforcement, regrouping, and maintenance.

The Atlantic Charter emphasizes collective security: President Franklin D. Roosevelt and Prime Minister Winston Churchill meet aboard the ill-fated HMS Prince of Wales in Placentia Bay, off Newfoundland. Roosevelt had invited Churchill to the meeting, which lasted from August 10 to 15, 1941. Among many issues discussed were Japanese aggression, assistance for the Soviet Union, and strategy (even though the U.S. was still officially neutral).

At Roosevelt's suggestion, Churchill drafted a communiqué stating their common aims. In the eight points of this Atlantic Charter, the leaders emphasized that they made no territorial claims and favored self-determination, reduced restrictions on trade, collective security, and renunciation of force. The charter was endorsed by signatories of the Declaration of the United Nations on January 1, 1942.

Wehrmacht loses its momentum: By August 1941, the Wehrmacht's startling advance into Soviet territory had finally slowed. Overextended supply lines and the army's high dependence on mobility -- involving fuel, ammunition, food, vehicle spares, and railway access -- necessitated a period of regrouping and replenishment. But this pause also provided an opportunity for the badly battered Soviets to regroup.

Now, some 30 Soviet Far Eastern divisions -- men accustomed to the rigors of winter warfare -- began to be deployed west from Siberia. The Red high command planned a major offensive, in the Moscow area, for early December.

Moscow spared from heavy bombing: At the beginning of Operation Barbarossa, Moscow was one of the more important Nazi German strategic objectives. Not only was it the nation's capital, but it was the center of the western Soviet Union's rail network and home to much of its industry.

However, the Luftwaffe's highest priority was to destroy the Soviet ground forces. Consequently, relatively few bombing raids (such as this one) struck the capital. Although probably exaggerated, a Soviet report stated that only 229 German aircraft appeared over Moscow from June to December 1941.

For a look at what happened during the rest of August 1941, see the next section.