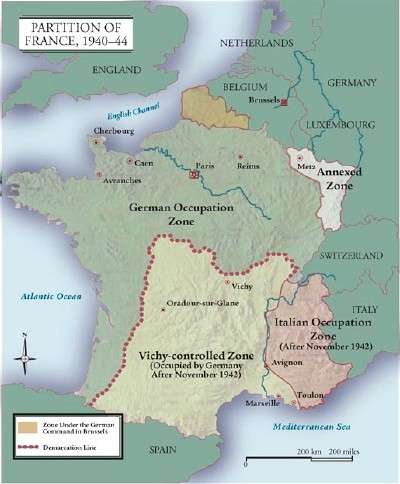 On August 30, 1941, Nazi German troops blocked the last rail supply route to Leningrad. The World War II timeline below summarizes this and other important World War II events that occurred during the end of August 1941.

August 24: In response to domestic discontent, Adolf Hitler orders a stop to his policy of exterminating the mentally ill. Since the beginning of the war, more than 70,000 such people have died at the hands of ­the Nazis. The policy will be continued in a decentralized manner, with another 100,000 dying by May 1945. Thousands also will be killed in Nazi German-occupied areas.

August 25: Spitsbergen, a remote Norwegian island best known as a historical whaling center, becomes a strategic war base with the arrival of British commandos.

The Allies occupy Iran on two fronts, with the British marching in from the south and the Red Army from the north.

August 26: In a stunning execution of the "scorched earth" war strategy, the Soviets will blow up their Dnieper Dam, the largest in the world.

The U.S. unveils plans to send a delegation to meet with Chiang Kai-shek's Nationalist Chinese government to determine what assistance they need to battle Japanese imperialism.

August 27: Nazi German submarine U-570 is improbably captured by an RAF Hudson plane that drops four depth charges, which prompt the submarine's crew to surrender.

August 28: Vichy France's antiterrorist laws lead to the execution by guillotine of three members of the French Resistance.

The Japanese government sends a memo to President Franklin Roosevelt offering disingenuous assurances that Japan has no imperialist designs on any foreign nation.

France is divided and Nazi Germans seize Kiev -- these are just two of the important events that took place at the end of August 1941. Read the following headlines for other major events of World War II.

The divisions of France: After France capitulated to the Nazi Germans on June 22, 1940, France was divided. The elderly Marshal Philippe Pétain headed an authoritarian, nationalistic, anti-Semitic, and non-Republican Vichy regime that over time collaborated extensively with the Germans. The remaining French armed forces were divided between Vichy and Charles de Gaulle's Free French, with the latter exiled and commanded from England. Eventually, on November 11, 1942, the Nazi Germans and Italians violated the terms of the 1940 armistice by occupying the whole of France.

Lethal gas vans kill thousands: In September 1941, SS Brigadeführer Artur Nebe, commander of Einsatzgruppe B (a mobile killing squad), experimented with alternatives to shooting prisoners. He thought of a gas van, which could include a hermetically sealed cabin in which victims would be killed by carbon monoxide exhaust fumes.

Reinhard Heydrich took up the idea, and by mid-1942 about 30 custom-built vans were made available. They were used from December 1941, especially by Einsatzgruppen and at the Chelmno death camp. Dozens of victims could be gassed at once. Altogether, many thousands of people were killed in the vans.

Arno Breker, Adolf Hitler's favorite sculptor: Arno Breker was a talented German sculptor who trained in Düsseldorf, Paris, and (in 1933) Rome. Although originally an abstract sculptor, his 1930s designs and output were particularly influenced by a deep appreciation of Roman "heroic sculpture." This formative influence coincided with the rise of Nazism, with its ideological and propaganda emphasis upon similar imagery to promote an idealized Germanic, Aryan, and Teutonic heritage. Consequently, Breker soon became Hitler's favorite sculptor. He received numerous state commissions, and was provided with vast studios and POW labor to assist him.

Artworks displayed massive images of stereotypical Jewish features. The exhibition pamphlet assured viewers that they would be "enlightened" concerning the Jews' "penetration into our country and the harm they have done here; you will therefore understand why so many Frenchmen are dead." About 200,000 French people paid to attend the exhibition.

Poet Ezra Pound trumpets fascism: In the 1930s, expatriate American poet Ezra Pound became increasingly interested in sociopolitical issues. Disillusioned with Britain, he become enamored with Mussolini's ideals. During the war, Pound made hundreds of anti-American radio broadcasts. He openly criticized the U.S. war effort and espoused anti-Semitic conspiracy theories. Arrested by American troops in 1945, he was imprisoned in Italy and, on return to the U.S., was pronounced mentally unfit to stand trial for treason.

Nazi German forces seize Kiev, Russia: Prepared to defend Kiev on a street-by-street basis, the Soviets constructed an extensive system of trenches, bunkers, and roadblocks. However, when the panzers of Army Group South reached Kiev on July 11, they bypassed it to the south to avoid becoming embroiled in street fighting.

On September 16, they joined with the southern arm of Army Group Center 120 miles east of Kiev -- thereby encircling the city and Soviet general Mikhail Kirponos's armies. Joseph Stalin forbade Kirponos to break out, so his 665,000 men and much equipment fell into Nazi German hands. Meanwhile, Kiev's defenses were dismantled.

William Shirer reports from Berlin, Germany: From 1925 to 1932, William Shirer was the European correspondent for the Chicago Tribune. While chief of the Universal News Service's Berlin bureau from 1934, he worked for CBS radio and wrote a journal that would become a book, Berlin Diary (1941). Shirer's most famous CBS broadcast described the surrender of France to Adolf Hitler at Compiègne on June 21, 1940.

Although eventually forced to leave Germany, Shirer later returned to Europe on various reporting assignments, including the Nuremberg Trials. He is best known for his book The Rise and Fall of the Third Reich (1960).

Sabotage and reprisals in Kiev, Russia: After bombarding Kiev's defenses for six weeks, units of Army Group South entered the city on September 19. Five days later, massive explosions destroyed the Nazi German headquarters in the Hotel Continental, together with many other Nazi German-occupied buildings. Extensive fires were started and a large number of soldiers killed.

The Nazi German military command blamed the Jewish population for this act of sabotage, and about 34,000 of Kiev's Jews were summarily executed in a reprisal action that became known as the Babi Yar massacre. In fact, the original explosions had almost certainly been caused by the Red Army's detonation of some 50 land mines.

Cordell Hull's important roles during the war: Cordell Hull, President Franklin Roosevelt's secretary of state from 1933 to 1944, played a major role in pushing Roosevelt's policy of lowering tariff barriers. When war began in Europe, he was instrumental in securing the neutrality of the Americas, and he also advanced FDR's interventionist policies regarding the Allies.

Cordell Hull played a big part in Roosevelt's effort to keep the Japanese talking until they could see for themselves that the Axis might well lose the war. In 1945 Hull was awarded the Nobel Peace Prize for his efforts in creating the United Nations.

The Nazi German-occupied Channel Islands: The only part of the United Kingdom occupied by the Germans during the war was the Channel Islands -- Jersey, Guernsey, Alderney, and Sark -- some 20 miles west of the Cherbourg Peninsula. Many of the islands' administrators collaborated with the Germans and resistance was officially discouraged, although some ignored this directive.

Meanwhile, life was harsh for the 60,000 ordinary people who had not been evacuated. Reprisals, internments, deportations, and heavy fines characterized the occupation, while near-starvation was pervasive. Informing, collaboration, and the black market flourished, and many women willingly consorted with German troops.

Learn about the major World War II events of early September 1941 on the next page.

On September 24, 1941, shortly after the Nazi Germans' successful 45-day battle for Kiev, Red Army engineers exploded a number of land mines that had been pre-positioned in key buildings in the city center. One of these was the Hotel Continental, in which the Germans had just established their headquarters. The devastation was enormous, with hundreds of German troops killed or severely injured and 25,000 Kiev residents left homeless.

Even though the attack had been carried out by Russian soldiers, the Nazi German high command blamed the city's Jewish community and ordered it to assemble for "resettlement" on September 29. These Jews, together with a number of Gypsies, were then marched away in groups into the nearby forests by troops of Sonderkommando 4a of SS Einsatzgruppe C along with Ukrainian militiamen.

Over a two-day period, the groups arrived at Babi Yar, a ravine. There they were summarily shot and then buried in a huge pit. In total, some 34,000 Jews died at Babi Yar. Subsequently, the Nazi Germans stated that they had solved Kiev's housing problem by evacuating an "adequate number of apartments."

Far from condemning the atrocity, several non-SS senior officers applauded such actions. Among them was Field Marshal von Reichenau, commander of the German Sixth Army, who issued a directive emphasizing the need for his soldiers to "fully understand the need for severe but just atonement of the Jewish subhumans."

While Einsatzgruppen would go on to execute hundreds of thousands of Jews during the war, Babi Yar was the largest individual massacre.