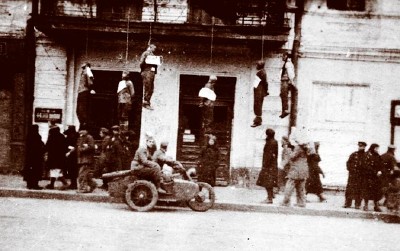 On October 16, the prime minister of Japan resigned, to be replaced by General Tojo Hideki the following day. Learn about this and the other major events that took place in October 1941 below.

October 4: The United States and Great Britain agree to a regular monthly shipment of tanks and planes to the Soviet Union.

October 7: Some 17,000 Polish Jews from the town of Rovno are tortured and executed at the hands of the Nazi SS.

October 9: Claiming that adherence to the Neutrality Act is not possible when faced with the "unscrupulous ambitions of madmen," Franklin Roosevelt asks for congressional permission to arm the U.S. merchant fleet.

October 10: The vast majority of voters in the Grand Duchy of Luxembourg boycott a referendum calling for Germany's annexation of their small nation.

In a remarkable effort to maintain production during wartime, the Soviets continue a mass relocation of Moscow-area factories to locations in the East.

October 16: While Joseph Stalin remains, most Soviet officials flee Moscow, taking the body of a dead but well-preserved Lenin with them. The government relocates to the eastern city of Kuibyshev.

A massive defense perimeter, including more than 5,000 miles of trenches, is constructed around Moscow by a half-million Muscovites -- mostly women, children, and old men.

Read on for details on other major World War II events that took place in 1941.

Nazi Germans murder Jews and Bolsheviks: The German Sixth Army, commanded by General Walter von Reichenau (a steadfast supporter of Adolf Hitler's war plans), captured Kharkov, Ukraine, on October 25, 1941. Thereafter, he ordered extreme punitive action taken against "hostile elements," such as Jews and Bolsheviks. Saboteurs were to be publicly hanged, such as these six men who allegedly had destroyed an explosives store. Soon, executions and hostage-takings numbered in the hundreds.

However, such atrocities were of little consequence to Joseph Stalin -- himself the leader of an equally repressive regime -- other than for their propaganda value. Meanwhile, the opposition of those who might otherwise have welcomed the Nazi Germans was strengthened by such excesses.

Children fight for the Soviet Union: Although surprised by Nazi Germany's invasion in June 1941, the Soviet Union speedily mobilized to fight what was generally recognized to be a war of survival -- the "Great Patriotic War." Men, women, and children were soon fully committed to the war effort.

In Moscow, children conducted street patrols and enforced air raid precautions. In the occupied areas, they gathered intelligence, carried messages, and fought alongside the partisans. Their actions prompted a Nazi German order that any child found on a railway line was to be shot.

The craft of sniping: Sniping represented the ultimate professional challenge for an infantryman, as it required marksmanship and field-craft skills as well as initiative, judgment, and intelligence awareness. A single sniper -- who targeted officers, other commanders, radio operators, and weapons specialists -- could have a significantly detrimental impact upon an enemy's morale and operations. The Red Army also used female snipers. Although sniping was carried out by all sides, snipers risked being shot if caught, as the nature of their task often provoked exceptional anger among their opponents.

Grand Mufti Muhammed Amin al-Husseini meets Adolf Hitler: Grand Mufti Muhammed Amin al-Husseini -- an Islamic scholar, religious leader, and member of a powerful Palestinian clan -- fought against Jewish immigration and the establishment of a Jewish state in the British Mandate of Palestine. In 1941 al-Husseini fled to Germany. Meeting with Hitler on November 28 and other Nazi leaders, al-Husseini pushed to extend Nazi Germany's Jewish extermination program. Hitler promised him that all Jews in Palestine and elsewhere in the Middle East would be killed. Since Hitler intended to turn the area over to Mussolini, he would not announce support for Arab independence.

Check out the next section for a timeline of late October 1941.

About 5.5 million Red Army officers and soldiers were captured during the war, three-quarters of them in 1941. Their fate was bleak. By May 1945, approximately four million of these captured troops were dead.

Nazi dogma identified bolshevism as the ultimate evil and Soviets as racially subhuman. This translated into an almost complete disregard by the Nazi Germans for their Soviet POWs, other than as a source of slave labor. Indeed, the SS regularly executed Soviet POWs upon their capture, thereby avoiding the administrative inconvenience and wasted resources necessary to escort and confine them. As a matter of Nazi German policy, Red Army political officers and NKVD soldiers were summarily executed, as were many ordinary Soviet military officers.

Red Army POWs who survived the first few days of capture faced endless marches and interminable rail travel -- usually in sealed cattle wagons, but sometimes in open wagons even during winter -- as well as disease, forced labor, and starvation. Those POW camps established specifically for Soviet prisoners were maintained at standards even lower than those of the main concentration camps.

The ill-fortune and misery of many of these Red Army POWs did not necessarily end in 1945. Joseph Stalin and the Soviet leadership subsequently condemned large numbers of them, as traitors, cowards, and/or collaborators. The Soviets executed some of them and imprisoned many.