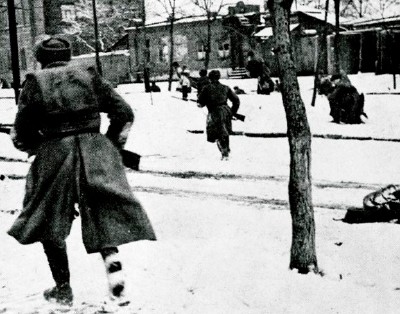 On October 17, 1941, the first U.S. soldiers died in the war. Learn about this and the other major events of mid- to late October 1941 in the timeline below.

October 21: The Nazis retaliate for a series of attacks against Reich soldiers by Serbian partisans by massacring thousands of residents of Kragujevac.

October 26-27: Some 115 bombers with the RAF attack Hamburg, Germany, during the overnight hours.

October 27: The Nazis test-drive a van designed to dispatch its occupants with engine exhaust. They will kill nearly 300 Polish Jews from Kalisz with this technique.

Nazi German Einsatzkommandos murder some 9,000 Lithuanian Jews, nearly half of whom are children.

October 30: Franklin Roosevelt extends a $1 billion loan to the Soviets under the provisions of the Lend-Lease Act.

After a month in which it rained incessantly, the Nazi Germans are forced to postpone their Moscow campaign while the ground dries out.

October 31: The Nazi SS commander in Estonia reports the successful extermination of essentially all Estonian Jews.

In a series of 45 strikes, the Luftwaffe "softens" the defenses of Moscow prior to a ground attack.

The United States loses its first ship in combat when the destroyer Reuben James sinks off the Icelandic coast, claiming the lives of 115 sailors.

November: Over the next month, some 11,000 Soviet civilians will starve to death during the Siege of Leningrad.

Read on to learn about some of the other major events of World War II, including Japan's attack on Pearl Harbor.

Although not a catastrophic reversal, this was nevertheless Nazi Germany's first such enforced large withdrawal. It accompanied mounting Nazi German casualties, increasing logistic and maintenance problems, escalating partisan activity, and the full onset of Russia's winter. The Nazi Germans had not prepared for winter weather because they had assumed victory would be theirs within a few months.

Warrior horsemen of Russian Steppes (Cossacks) fight on both sides: Cossacks, the warrior horsemen of the Russian Steppes, fought on both sides from 1941. Despite persecutions by the Soviet Communists in the 1920s and 1930s, some 100,000 served loyally within the Red Army. But many Cossacks, after being captured by the Nazi Germans, formed units within the German forces. In 1944 these units were combined to create a Waffen-SS cavalry corps.

The Cossacks' legendary skills in irregular, counter-partisan, and guerrilla-style warfare enabled them to wreak havoc across the German and Soviet rear areas. In 1945, following their enforced repatriation to the Soviet Union by the Allies, Joseph Stalin inflicted savage retribution upon the thousands of Cossacks who had fought for the Nazi Germans.

"Inferior subhumans" include criminals, Jews, Gypsies, and more: The Nazis described homosexuals, prostitutes, criminals, beggars, the mentally or physically disabled, and anyone holding certain religious or political views as Untermenschen, meaning biologically inferior subhumans. They also considered all Jews, Slavs, Turks, Mongols, Gypsies, and those of African descent as Untermenschen.

Pictured above is the cover of Der Untermensch, a 52-page 1942 magazine edited by Heinrich Himmler that contrasts carefully selected images said to be of depraved Untermenschen with those of beautiful "Aryans." Warning that the Untermenschen would overrun civilized Europe, the Nazis claimed justification for military aggression, enslavement, and genocide.

Japanese negotiators unaware of Pearl Harbor attack: Japanese ambassador Nomura Kichisaburo appeared on the cover of Time on September 22, 1941. He was nicknamed the "Honorable Fire Extinguisher" due to his efforts to negotiate a peace agreement between Japan and the United States. Nomura and Special Envoy Kurusu Saburo met for diplomatic talks days before the Pearl Harbor assault. They were unaware an attack had been planned when, in the afternoon on December 7, they presented Secretary of State Cordell Hull with what amounted to a declaration of war. Hull coldly informed them that the attack had already begun.

Yamamoto Isokoru spearheads Pearl Harbor attack: Wounded in the Russo-Japanese War, Yamamoto Isokoru of Japan later spent considerable time in the United States. He studied at Harvard and the Naval War College and served as a naval attaché in Washington. As commander-in-chief of the Combined Fleet, Admiral Yamamoto opposed war with the U.S., saying, "I shall run wild for the first six months . . . but I have utterly no confidence for the second or third year."

When war was decided in Tokyo, he insisted on replacing the Japanese plan for war with the attack on Pearl Harbor. Later, he saw his fears borne out at Midway and Guadalcanal. He was killed on April 18, 1943, when U.S. fighters ambushed his plane over Bougainville.

Japanese prepare for Pearl Harbor: "As boys," one Zero fighter pilot later recalled, "we were told we should join the military when we grew up because that was the best way to bring honor to Japan." The plan to open war with the U.S. by attacking Pearl had been approved in mid-October. To train for the attack, mock-ups of U.S. warships were used by air squadrons to simulate level and dive-bombing on moving and fixed targets. All was ready by mid-November 1941.

Japanese strike Ewa station first: U.S. Marines armed with Springfield 03 rifles look skyward for Japanese planes at Ewa Marine Corps Air Station southwest of Pearl Harbor on December 7, 1941. Ewa came under air attack about two minutes before the main enemy raid struck Pearl Harbor. Eighteen to 24 enemy fighters descended to within 25 feet of the ground to strafe the base. They destroyed 33 out of 49 U.S. aircraft on the ground and damaged the remainder.

See the next section for a timeline of November 1941 as well as other World War II headlines.

Although the possibility of an air attack on Pearl Harbor had been discussed for years, and although war with Japan was a distinct possibility as negotiations over China and Indochina faltered, the defenders were indeed surprised. Kimmel and Lieutenant General Walter Short, Hawaii's army commander, had considered an attack unlikely and strategically pointless. Nevertheless, the island's radar had detected the approaching enemy aircraft, and a Japanese submarine had been attacked outside the harbor, but these warnings went unheeded.

The first wave of the attack inflicted terrible damage to the airfields and to a half-dozen ships -- most notably the Arizona, Oklahoma, and California -- before departing at about 8:30 a.m. Thirty minutes later, another 170 aircraft attacked, concentrating on previously undamaged ships. This wave lost 20 planes to antiaircraft fire before its departure at 10 a.m. signaled the end of the raid. American casualties included 21 ships damaged or sunk (all but three would be salvaged) and 3,600 men killed or wounded. One hundred and eighty-eight aircraft were destroyed, and 159 were damaged.

Fortunately for the fleet, its especially precious ships, the aircraft carriers, had been away. The Enterprise and Lexington were delivering aircraft to Wake and Midway islands, and the Saratoga was being repaired on the West Coast. Moreover, the Japanese task force commander, Admiral Nagumo, had not sent in a third wave to destroy Hawaii's huge oil tanks (which held 140 million gallons of diesel oil) and repair facilities. The attackers lost 29 aircraft (with a further 70 damaged) and five midget submarines.

Though the assault was a tactical success, strategically it was a disaster. President Franklin Roosevelt's depiction of it as an "unprovoked and dastardly attack" reflected the mood of the American public, which subsequently cast aside isolationism and pacifism. According to Roosevelt's critics, he allowed the attack to occur (in order to justify his desire to enter the war) by withholding warning information from Kimmel and Short. The balance of evidence still refutes this conspiracy theory as well as the arguments that Winston Churchill withheld information about the imminent attack.

The Pearl Harbor attack led to the merging of the aggressive wars of Japan and Nazi Germany and the involvement of the United States in a global war. The cry "Remember Pearl Harbor" resonated throughout the war, as well as in postwar American foreign policy.