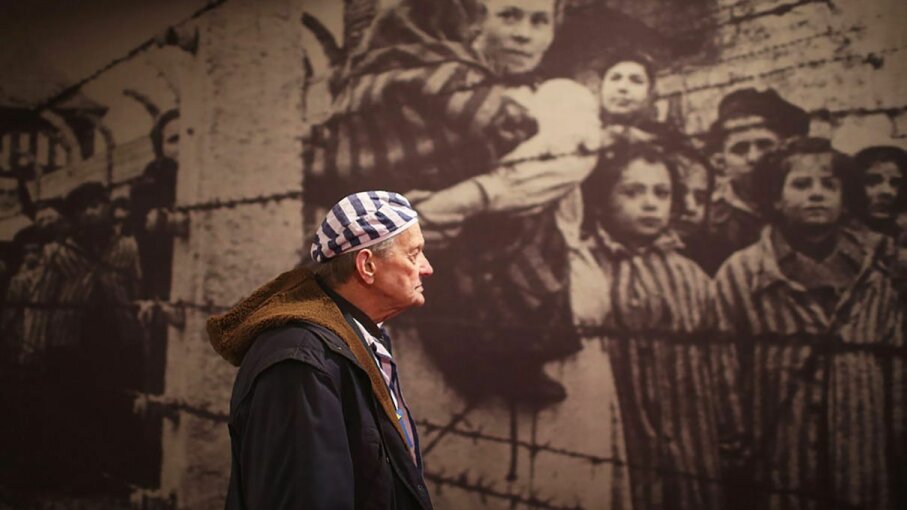 Holocaust survivor Igor Malicky, 90, pauses as he tours an exhibition inside the former German death camp Auschwitz ahead of commemorations in 2015 marking the 70th anniversary of the camp's liberation. Christopher Furlong/Getty Images

Amy Oestreicher's grandmother survived the Holocaust, the genocide of 6 million European Jews during World War II. After starting a new life as an immigrant in the United States she rarely spoke of the horrors she endured at the Nazi extermination camp Auschwitz.

"It came out at unplanned, emotional moments," says Oestreicher. "Once, we threw a birthday party for my grandma and she started crying over her guilt that she was alive and none of her friends were there. Her Holocaust experiences came out a little at a time."

Oestreicher, who became a speaker, author and PTSD expert after surviving her own medical trauma as a teenager, spent years recording the stories of her grandparents and relatives — most of whom didn't start talking about their Holocaust memories until old age. "Each one of them started with, 'I don't know anything,'" says Oestreicher, "but I ended up with hundreds of pieces of oral history. I was able to eventually put a narrative together."

This quest for a Holocaust narrative based on firsthand experiences helped Oestreicher preserve her own family history. Preventing personal histories from being lost sometimes takes an overt act, like that of Oestreicher. And sometimes it's an accident of fate.

That's the case with the recent discovery of long-lost audio recordings of Holocaust survivors, including oral accounts and inspirational songs, adding another layer to our collective history.

The collection of interviews and songs were recorded by David Boder, a psychologist who traveled from the U.S. to Europe in 1946 to document the experiences of at least 130 Jewish survivors of Nazi death camps. The recordings included a reel of songs, sung in Yiddish and German, that were meant to inspire resistance, as well as songs the imprisoned Jews were forced to sing by German officers in concentration camps.

Twenty years after he made the recordings, Boder donated some of them to the University of Akron. But in the 1960s the reel containing the survivors' songs was stored in an incorrectly labeled canister deep within the university's archives — until now, when an employee on a mission to digitize the archives discovered it half a century later.

"I think it is one of the most important discoveries from our collections in our 50-year history," said David Baker, executive director of the Cummings Center for the History of Psychology at the University of Akron, in a statement detailing the discovery. "That we could give the world a melody to a song sung by those sentenced to their death through forced labor during one of the most unspeakable horrors of the 20th century is remarkable."

Holocaust survivors of the Sachsenhausen death camp attend ceremonies in 2015 marking the 70th anniversary of the liberation of Sachsenhausen in Oranienburg, Germany. An estimated 30,000 people were killed in that camp alone between 1936 and 1945.
Sean Gallup/Getty Images

Before the songs could be heard, however, the technology to play the recordings required re-engineering. Baker's recording device — which preserved sound on thin steel wire — was cutting-edge technology back in the 1940s, but by the time the reel was rediscovered, wire recorders in working order were nearly obsolete. None of the wire recorders in the university's collection were compatible with the rediscovered spools, but university workers spotted one on eBay, bought it, redesigned it and donated it. From there, a media specialist was able to play the spool and transfer it to a digital format so the songs could be heard, shared and studied. Baker explains the process in this University of Akron video:

"These songs, in the voices of those subjected to unspeakable cruelty, are a reminder of the power of memory, the value of history and the indomitable human spirit," said Baker.

A digitized version of the songs is now part of the United States Holocaust Memorial Museum in Washington, D.C., where the museum's staff members have been translating them. Samples of the songs can be heard here on the blog of one of the research center; more will become available once the ongoing digitization process concludes.

Connecting With Our Past

For Oestreicher — who was not involved in the restoration of the recordings, but has been following the story of the songs since they first resurfaced — the voices represent a way to transfer history to a new generation.

"These songs, newly brought to life, were a communal and creative activity used to keep their spirit alive, or defy control or power, in any way they could during the Holocaust," she says. "The songs also filled a need to document what was happening. That becomes a big part of cultivating hope.

Holocaust survivor Mordechai Ronen (front) from the United States is embraced by World Jewish Congress president Ronald Lauder as he arrives at the former Auschwitz concentration camp in Oswiecim on January 26, 2015. Ronen, who was 11 years old when he...
Odd Andersen/AFP/Getty Images
Now That's Interesting
The word "holocaust" has its roots in the Greek words "holos" and "kaustos," which mean whole and burned. It initially referred to a sacrifice burned on an altar, but after 1945, the word represented the mass murder of an estimated 6 million Jews and millions more from other persecuted groups.