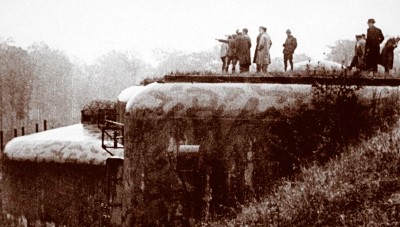 The Germans began their western offensive in early April 1940, attacking both Denmark and Norway. The World War II timeline below summarizes important events that occurred during the month of April 1940.

April 2: Chinese Nationalists score a victory when they reoccupy the city of Wuyuan after successfully ambushing some 3,000 Japanese troops.

April 5: In what will become known as the Katyn Forest Massacre, Soviet secret police murder more than 4,000 Polish prisoners of war. The Soviet government will deny culpability until 1989. Around the same time as Katyn, more than 15,000 other Polish POWs are killed at other locations.

April 8: Despite Norway's neutrality, the Allies mine coastal waters in the region in an effort to impede German activity.

April 9: Nazi Germany attacks Norway and Denmark on the pretext that occupation is necessary to preserve their neutrality. Norwegian Fascist leader Vidkun Quisling quickly moves to create a pro-Nazi government. As a result, his surname will become synonymous with traitor.

Wary of abandoning its neutrality, Belgium declines the Allies' offer of "preventative aid."

The German cruiser Königsberg is sunk by British warplanes, marking the first time in history that a large warship is sunk by an aerial assault.

Below are more highlights and images that outline the events of World War II and show the details and consequences of the German invasion in 1940.

The Maginot Line gives French military a false sense of security: Soon after World War I, under the direction of Minister of War André Maginot, France constructed formidable concrete obstacles, machine gun posts, and forts along its borders with Germany, Italy, and later Belgium. In 1939-1940, France hurried to improve the secret fortifications. Underground bunkers that could house thousands of men included such amenities as a wine cellar, morgue, chapel, hospital, and dental clinic. Illustrators often depicted the constructions as compact, but they were actually spread out and connected with tunnels through which trolleys carried troops and weapons. These preparations gave the French military a false sense of security. Invading German forces simply maneuvered around the Maginot Line.

Norway forced into war through Nazi German invasion: Norwegian houses burn in Narvik during the spring 1940 German invasion. After the British rescue of Altmark prisoners and other actions in Norwegian waters, Hitler feared losing the neutral country's ports of Narvik, which were essential for shipping Scandinavian iron ore to Germany. Adolf Hitler attacked Norway by land, air, and sea, overrunning resistance. In mid-April, British, Polish, and French forces landed to aid the Norwegians and took Narvik. The British sank 10 German destroyers -- half of the entire fleet. However, with France near collapse, the Allies withdrew on June 8, leaving Narvik to German occupation. The Norwegian conflict included the first paratrooper attack (by Germany) in history, and Britain's first major amphibious landing of the war (at Narvik).

Norwegians refuse to surrender to Nazi Germany: When the Germans occupied Norway in April 1940, they showed off these three experimental tanks (never put into production) in the streets of Oslo. Germany had trouble taking Norway due to bad weather, strong fortifications, and tenacious Norwegian resistance. The royal family and members of Parliament had time to escape to the north. Although the Germans set up a puppet government under Nazi supporter Vidkun Quisling, Norway's King Haakon never surrendered. When the Allies evacuated Norway, the Norwegian government moved to Britain and operated in exile. It controlled its own merchant navy and built a new military to support the Allies.

British plane spotters recognize and report enemy aircrafts: A Royal Observer Corps (ROC) plane spotter watches for enemy aircraft. Back in 1925, the ROC was formed to provide a system for detecting, tracking, and reporting aircraft over Britain. Plane spotters learned to recognize aircraft by their silhouette, and often by the sound of their engines. In the U.S., Civil Defense workers and WAACS (Women's Army Auxiliary Corps) maintained spotting stations, and in Germany the Reichsluftschutzbund (National Air Defense League) had a similar mission.

Follow more World War II events of April and May 1940, including Nazi Germany's invasion of the Low Countries, on the following page.