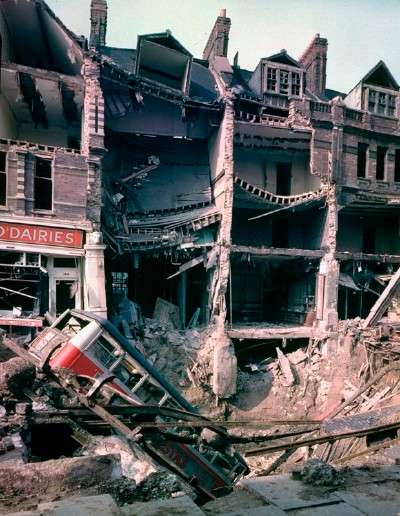 In August 1940, Britain retaliated for an attack on London by bombing Berlin for the first of what would be many air attacks in World War II. Follow this and other major World War II events from August and September of 1940 in the timeline below.

August 23-24: The Luftwaffe bombs London. Though oil facilities east of the city are targeted, London proper sustains most of the damage. The British Royal Air Force (RAF) will retaliate two nights later, attacking Berlin for the first time.

August 31: In the greatest one-day loss for the RAF to date, the Luftwaffe takes out 38 planes and critical airfields in southern Britain.

As many as 4,000 German troops perish when the transport ship Marion founders after taking a direct hit from a British torpedo.

September 6: Fascist General Ion Antonescu and his Iron Guards take control of the Romanian government. Romania's King Carol is forced to abdicate after ceding much of Transylvania.

The U.S. Navy transfers the first eight of 50 destroyers promised to the Royal Navy in exchange for U.S. bases at Bermuda and other British possessions.

September 7: The Luftwaffe turns its attention from British military to civilian targets. This is part of what will be called the Blitz.

September 10: Italian troops stage themselves in Albania prior to their planned assault on Greece.

Below are more highlights and images that outline the events of World War II and the German Blitzkrieg in 1940.

Nazi Germany's Blitz of London kills 43,000: From September to mid-November 1940, an average of 200 Axis aircraft bombed London on every night but one. Meanwhile, Luftwaffe fighter bombers and single bombers on precision bombing missions also attacked the capital by day. Regular air raids then con­tinued until May. Destruction was widespread and severe. This massive crater was possibly caused by one of the Luftwaffe's huge 2,500-kilogram "Max" Sprengbombe Cylindrisch bombs. Countrywide, from September 1940 to May 1941, the Blitz caused 43,000 civilian deaths and 139,000 serious injuries, as well as laying waste to many residential areas and industrial, dockland, and infrastructure facilities.

Hurricanes, Spitfires defend Britain: In 1937 the RAF's first monoplane fighter -- the Hurricane Hurricane Mark I -- entered squadron service. It boasted a top speed of more than 300 mph, eight machine guns (replaced with cannons in late 1940), and an operating radius of up to 600 miles. This formidable aircraft, together with the Spitfire (introduced in 1938), proved to be the mainstay of RAF Fighter Command during the crucial Battle of Britain. Using radar to track the approaching German bombers, RAF headquarters sent these Hurricanes and Spitfires to intercept. They inflicted crippling losses upon the Luftwaffe, which helped prevent a German invasion.

"Winston stood alone in front, his dark blue boiler suit undone at the neck, a tin hat on his head, his hands folded on his stout stick in front of him, his chin thrust out, the long cigar in his mouth, and just across the other side of St. James's Park, Carlton House Terrace was ablaze: the boom of bombs exploding to the south, the crack and rattle of the AA guns and exploding shells, the red-white glow of the fire silhouetting the tall black trunks of the great trees in the park. It was a moment in history to remember, and above the noise came the angry voice of Winston Churchill: "By God, we will get the B's for this."

on the German Blitz bombing of London