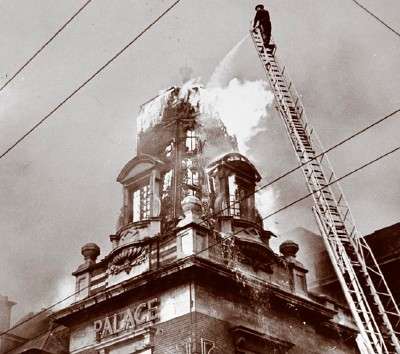 In September 1940 Italy continued its assault on north Africa and both the United States and Canada instituted conscription policies. Read about these and other important World War II events in the timeline below.

September 13: An anemic British force is pushed back when Italy embarks on its first significant assault on the North African front, marching five army divisions into Egypt from Libya.

The African war continues with a 20-mile incursion by Italian troops from occupied Ethiopia into British Kenya.

King George VI and Queen Elizabeth remain in London, despite narrowly missing being struck by bombs that tore through the roof of Buckingham Palace.

September 16: The U.S. Congress passes the Selective Training and Service Act, which will enable the registration and conscription of American males ages 21 to 35.

September 17: Seventy-seven British children, en route to Canada to escape the destruction of war, die when a U-boat sinks their ship, City of Benares.

September 21: Officials in London permit Londoners who do not have access to bomb shelters to use the Underground for that purpose. At one point, more than 170,000 people will be sleeping in the "Tube."

September 23: In a sign of horrors to come, Nazi SS chief Heinrich Himmler decrees that gold teeth should be removed from the mouths of dead concentration camp inmates.

September 25: American intelligence agents crack Japan's diplomatic code, known as "Purple." Along with Britain's deciphering of the German Enigma machine, this is a significant victory for Allied intelligence.

More images and highlights from major events of World War II and its impact on Britain are below.

London firefighters battle blazes caused by Blitz: In 1940 and '41, Britain's fire services included full-time and part-time regular firefighters as well as part-time auxiliaries. The full-time firefighters worked shifts of 48 hours on duty followed by 24 hours off, and they were joined during the particularly busy night hours by the part-time auxiliaries. Here, firefighters battle a blaze in London. Initially, the firefighting response to major fires that involved operations across local authority boundaries was hampered by the fire service's localized and excessively parochial system of command and control. However, after the Blitz ended in May 1941, all of these semiautonomous forces were brought together to form the National Fire Service.

Britain's Auxiliary Fire Service unsung heroes: Members of the Auxiliary Fire Service (AFS) add pins, probably representing the locations of pumps or fires, to a map of London on the wall of Fire Brigade Headquarters during the Blitz. The Auxiliary Fire Service had existed since 1937, and by September 1939 it had tens of thousands of male and female members. They were amateur firefighters recruited to work alongside regular fire brigades fighting fires started by enemy bombing. Incompatibility of the brigades' equipment hampered effectiveness, and in 1941 the AFS and regular brigades were merged into the National Fire Service. Winston Churchill called the London firefighters "heroes with grimy faces." More than 900 firemen and women lost their lives during the war.

British Army's Corps of Royal Engineers defuse "dud" bombs: The skillful but immensely hazardous task of disposing of unexploded bombs (UXB) or "duds" fell primarily to the British Army's Corps of Royal Engineers. Some 10 percent of the high-explosive bombs that were dropped failed to explode or had delayed-action fuses, and by the end of 1940 there were some 3,000 UXBs waiting to be defused. Whether still lying buried or clearly visible, these marked and cordoned (but still potentially deadly) devices would disrupt all movement and activity in the surrounding area. Here, Royal Engineers remove a deeply buried one-ton UXB near St. Paul's Cathedral in London. The huge bomb was safely exploded 30 minutes later.

October 1940 saw Britain imploring the United States for military assistance in both the Atlantic and Pacific. Read about this and other events on the World War II timeline next.