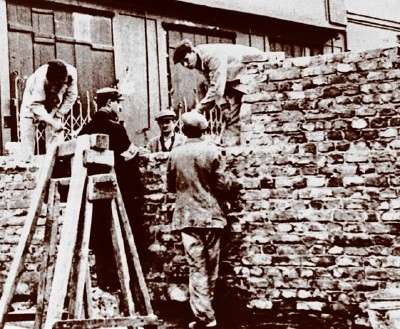 In October 1940, Benito Mussolini invaded Greece in a move that would end in utter disaster for Italy and the Axis powers. Follow this and other major World War II events in the timeline below.

October 13: More than 150 people die when a London bomb shelter sustains a direct hit during an air raid. Another 64 will be killed on the 15th when bombs strike the Balham Underground Station.

October 15: London's primary water source, a pipeline that carries some 46 million gallons every day, is severely damaged in a bombing raid.

October 17: More than 1,500 British civilians have been killed in German bombing raids in the past week alone.

October 18: In defiance of Japan, Britain restores China's trade route to the West by reopening the Burma Road.

October 22: The Nazis begin to deport Jews from parts of Germany to southern France.

October 23: Francisco Franco, Spain's Fascist leader, is unmoved by a nine-hour meeting with Adolf Hitler, and refuses to ally Spain with the Axis.

October 26: With more than 150,000 Italian troops at the ready, Benito Mussolini attempts to justify his inevitable invasion of Greece by claiming that Greece has attacked Albania.

October 28: Benito Mussolini sends Italian troops into Greece in an invasion attempt that will end in total disaster for the Italians.

Below are more highlights and images that outline the events of World War II and the Axis and Allied movements of 1940.

Nazis ghettoize Warsaw's Jews: Polish and Jewish laborers contribute to the construction of a 10-foot-high wall that will enclose the Jewish ghetto of Warsaw. After the 1939 Nazi German takeover of Poland, Gestapo chief Reinhard Heydrich ordered Jews into segregated living areas. In the fall of 1940, Heydrich used the pretext of a typhus outbreak in Jewish neighborhoods to force the city's Jews into a 3.5-square-mile section of town. Non-Jewish Poles were moved out of the area. That November, the ghetto wall's 22 gates were closed, sealing off 360,000 Jews (one-third of Warsaw's entire population) from the rest of the Polish capital.

The Importance of Radar

During the war, combatants used radar to detect ships and planes far beyond the range of the human eye. In simple terms, radar (radio detecting and ranging) utilizes transmitters to bounce radio waves off distant objects, revealing the objects' location, speed, and distance.

The use of radio waves to detect distant or unseen metallic objects was first demonstrated by German scientist Christian Hulsmeyer in 1904. However, it was the British who first used radar for a military advantage, as they built a series of radar stations along the English coast in 1938 to detect approaching aircraft. Known as the Chain Home, this system subsequently played a crucial role in the victory over the Luftwaffe during the Battle of Britain.

The Axis powers had also dabbled with radar technology in the 1930s, but they were slow to recognize its military potential, and never caught up with the Anglo-American technological edge.