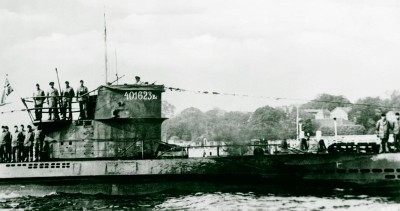 In early December 1940 Adolf Hitler finalized plans for Operation Barbarossa, the invasion of the Soviet Union, a decision that he would come to regret. This and other World War II events from November and December of 1940 are summarized in the World War II timeline below.

In what will become known as the "100th Regiment Offensive," Chinese Communists stage guerrilla raids against Japanese forces.

November 25: A wood-bodied De Havilland Mosquito prototype -- a fast, light, and agile British fighter that will become known as the "Timber Terror" -- takes to the air for its first flight.

November 26: Pierre Ryckmans, the governor general of the Belgian Congo, declares war on Italy. Italy will declare war on Belgium the following day.

Workers begin the construction of a 10-foot-high wall around the Jewish ghetto in Warsaw, Poland.

November 27: In an effort to bolster his power, Romanian dictator Ion Antonescu orders his Iron Guard to execute 64 officials who are loyal to the government of King Carol.

November 29: Plans for the Nazi invasion of the Soviet Union, dubbed Operation Barbarossa, are finalized.

December 6: A major upheaval in the Italian military command follows the disastrous invasion of Greece, as the army's chief of staff resigns. The chief of the Italian navy will resign on December 8.

Below are more images and highlights detailing World War II events and the German occupation and invasion of Europe.

German submarine U-48 sinks more than 50 ships: On September 11, 1940, Herbert Schultze, commander of the German submarine U-48, sent a terse radio message to Winston Churchill, announcing that he had sunk the British steamer Firby. After giving the wreck's coordinates, Schultze added, "Save the crew, if you please." Fast, agile, and far-ranging, the U-48 was commissioned on April 22, 1939, and proved herself the most successful German U-boat of the war, sinking more than 50 ships and damaging others during its 12 patrols. By June 1941, the U-48, already becoming obsolete, was relegated to training exercises.

Greece defends its soil from Italian invasion: Greek and Italian troops are portrayed in battle during the Greco-Italian War (1940-41). Embarrassed that his Italian forces had not achieved conquests comparable to Nazi Germany's, Benito Mussolini decided that Greece would be an easy target for invasion. Boasting that Adolf Hitler "will find out from the papers that I have occupied Greece," Mussolini launched his attack from Italian-occupied Albania on October 28, 1940. The outnumbered and outgunned Greeks won an unexpected victory in the Pindus Mountains, then drove the Italians back into Albania. By mid-December, the Greeks had seized a third of Albania, including the strategic Ionian port of Sarandë. After the Italian defeat, a dismayed Adolf Hitler was forced to invade Greece.