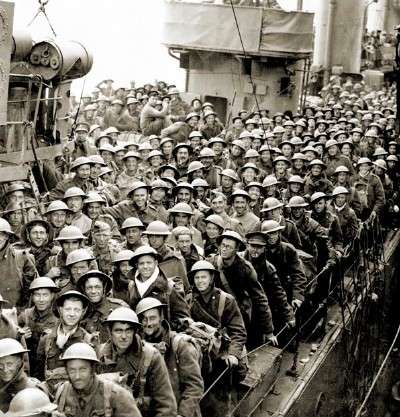 In June 1940 Benito Mussolini and Italy joined Adolf Hitler and Nazi Germany as an Axis power in World War II. The timeline below summarizes this and other major World War II events from June 1940.

June 7: Norwegian leadership flees the country and establishes a government-in-exile in London.

Berlin suffers its first bombing raid of the war when it is attacked by a single French aircraft, a four-engine Farman 223.

June 8: More than 1,500 British sailors perish when German ships sink the aircraft carrier Glorious and its escort of two destroyers.

June 10: After a lengthy delay, Italy enters the war with an invasion of a weakened France, already wounded by the German army.

With German troops only 50 miles from Paris, the French government relocates to Tours, France.

Benito Mussolini declares war against both Britain and France, while Canada reciprocates by declaring war on Italy. South Africa, Australia, and New Zealand will join Canada the following day.

With Italy's entry into the war, President Franklin Roosevelt declares that the United States will offer material support to the Allies.

June 14: France asks the United States to intervene as the Nazis occupy Paris.

Below are more images and headlines detailing events of World War II and the Nazi German and Italian aggression of late May and early June 1940.

Dunkirk evacuees escape by ship: In late May 1940, Adolf Hitler agreed with Nazi German General Karl Rudolf Gerd von Rundstedt to order a temporary halt to their attack. The reprieve lasted 48 hours and gave the British time to set up defenses and begin evacuation of 338,000 Allied troops. Reichsmarschall Hermann Göring promised that the Luftwaffe could destroy the Allied troops, but Dunkirk, France, was too close to British air bases. The British evacuees included many highly experienced soldiers who were eager to return to the fight, but they had lost all of their equipment.

"Little Ships" save troops, symbolize spirit of Dunkirk: British soldiers wait for rescue on Dunkirk Beach. When the planned evacuation was announced to the British public on May 27, 1940, a fleet of fishing boats, pleasure craft, merchant marine vessels, and other small boats rushed across the English Channel to help. They retrieved the British, French, and Belgian troops from the bombed-out harbor, which the larger ships could not enter, and ferried those troops to the big ships. These "Little Ships" quickly gained legendary status, and the "Spirit of Dunkirk" became a British rallying cry.

Luftwaffe rains terror on France: Firemen turn their hoses on a Parisian building that has been reduced to a smoldering ruin by Nazi bombardment. Even as the Allies evacuated at Dunkirk, Reichsmarschall Hermann Göring directed his Luftwaffe bombers inland. On June 3, 1940, 200 planes struck airfields, industrial sites, and buildings in Paris. This successful German effort to damage France's economy, reduce its military, and create terror in its population had a devastating psychological effect. To keep government officials at their posts, the French minister of interior had to threaten dire penalties against anyone who fled.

The French capitulated in mid-June of 1940. The timeline on the following page lists this and other World War II events from June 1940.