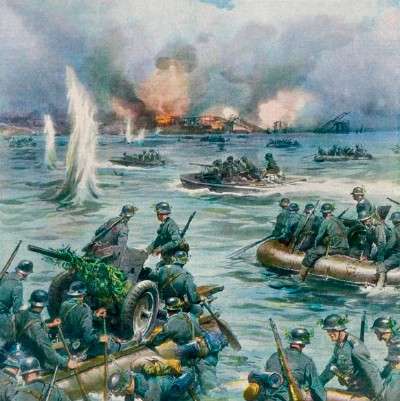 On August 7, 1942, U.S. troops landed on Guadalcanal and Tulagi and seized control of Japanese-occupied territory for the first time. Learn about this and the other important World War II events that occurred during the month of August 1942 below.

August: As many as 400,000 Jews will be murdered in occupied Europe during this month alone.

August 1: In an attempt to conserve oil for the war effort, President Franklin Roosevelt asks residents of the coal-rich states in the East to use that source of fuel instead of oil at every opportunity.

August 4: Auschwitz receives the first trainload of Jews from occupied Belgium to be designated for "resettlement."

August 7: Lieutenant General William "Strafer" Gott is killed by a Nazi German air assault in Egypt one day after reporting to his new post as commander of the British Eighth Army.

For the first time, the United States seizes control of territory occupied by Japan when the 19,000-man First Marine Division lands on Guadalcanal and Tulagi.

August 8: The United States executes six of eight German spies caught after coming ashore in Florida and Long Island. Two are given life sentences instead of death sentences after testifying against their comrades.

The day after a local victory on Guadalcanal, the Allies suffer a stunning setback offshore in the Battle of Savo Island, losing more than 1,000 sailors and four cruisers.

August 9: Nazi German operatives mark the ground near Long Island's Mitchell Field so that the important air base can be easily seen from the air.

In India, Mohandas Gandhi is arrested for impeding the war effort, three days after promising to engage his people in widespread civil disobedience if Britain continued to deny India immediate independence.

Below are more highlights and images that outline the events of World War II and show the details and consequences of the Soviets repelling Hitler's forces in 1942.

Nazi Germans advance toward Stalingrad: During the first half of July 1942, Nazi German infantry and armored forces battled to the Don River near Voronezh (a key city in the supply line to Moscow), Rostov, and other towns. Soviet resistance was initially disorganized but determined, and it delayed the Nazi Germans' crossing of the Don (pictured above) long enough to move Red troops away from danger of capture. By mid-month, Stalin realized that the ultimate objective of this Nazi German drive was Stalingrad. Soviet resistance stiffened accordingly.

Medical care lacking on the Eastern Front: In the early days of their invasion, wounded Nazi Germans could be treated and even evacuated by air. But as Nazi German forces penetrated deeper into Soviet territory, and as Red Army resistance increased, German soldiers found themselves cut off from medical care. Russian troops stationed in cities had rudimentary emergency services, sometimes with medicines supplied by Allied nations. However, the isolation and sheer ferocity of the battlefields meant that any soldier with an injury of this severity had little chance of survival.

Ernest King commands U.S. Navy: In December 1941, U.S. secretary of the Navy Frank Knox wrote, "Lord how I need him." He was referring to Admiral Ernest King, in whose hands Franklin Roosevelt placed the command of the Navy. Single-minded and uncompromising, King often clashed with General George Marshall (a fellow member of the Joint Chiefs of Staff) and later in the war with General Douglas MacArthur. King's creation of the antisubmarine command of the 10th Fleet was a major reason for American success in the Atlantic. At times, King felt that not enough attention was being paid to the Pacific Theater, and his ideas and plans were a significant reason for the success in that region.

Young members of the Waffen-SS are known for civilian atrocities: The Waffen-SS (Armed-SS) was the military arm of the larger Nazi German Schutzstaffel (SS; Protective Squadron). An elite combat group famous for fierceness and willingness to take casualties, the Waffen-SS was also notorious for atrocities perpetrated against civilians and prisoners of war. Initially, Waffen-SS members had to be at least 171/2 years old, with experience in the Hitler Youth, but rules were relaxed as the Nazi German war effort became more desperate. The Waffen-SS saw action on the Polish, eastern French, and Balkan fronts, and troops numbered in the hundreds of thousands.

William Donovan creates the Office of Strategic Services (OSS): "Espionage is not a nice thing, nor are the methods employed exemplary. . . . But we will turn terror against him -- or we will cease to exist." This was William "Wild Bill" Donovan's mission statement in June 1942 for the overseas intelligence agency, the U.S. Office of Strategic Services (OSS), which he had been chosen to create and lead. Although members of different political parties, President Franklin Roosevelt and Donovan had been classmates in law school. Donovan had proven himself as a master of espionage when Roosevelt chose him as coordinator of information (COI) in July 1941. This led to Donovan being assigned the task of creating the OSS a year later. By the end of the war, he had 16,000 agents working behind enemy lines.

Japanese Type 92 heavy machine gun, dubbed the "Woodpecker": The Allies called the Japanese Type 92 heavy machine gun the "Woodpecker" because of its distinctive sound. Introduced in 1932, its origins lay in the French Hotchkiss 6.5mm caliber machine gun and its 1914 Japanese copy, the Taisho 3. The 7.7mm caliber Type 92, distinguishable by its pistol grips, was a robust improvement on these older designs, but it had weaknesses. The 30-round horizontal ammunition strips limited its rate of fire to 450 rounds per minute. The gas-operated design required cartridges to be oiled before loading. At 122 pounds, it was heavy, requiring three men to move it while gripping carrying handles.

U.S. Marines conquer Tulagi: Above, a crashed Japanese bomber floats off Tulagi. U.S. Marines invaded the small island, located just 20 miles north of Guadalcanal, on August 7, 1942, to secure its valuable harbor. The initial landing took the defenders -- a detachment of the Third Kure Special Naval Landing Force -- by surprise. The Japanese detachment radioed Rabaul, stating: "Enemy troop strength is overwhelming. We will defend to the last man." By August 8, the Marines had pushed the defenders into the southeastern part of the island, where they were annihilated. All but three of the 300-man garrison were killed.

American Marines land on Guadalcanal: After U.S. Intelligence discovered a Japanese airfield under construction on Guadalcanal, the First Marine Division interrupted its training in Australia and hastily shipped out to seize the island. Planners saw the airfield as an unacceptable threat to supply lines to Australia and New Zealand and a possible preliminary to a renewed enemy advance to the south. The landing by more than 11,000 Marines took the 2,571 Japanese -- mostly laborers working on the airfield -- by surprise. Most of the enemy fled into the jungle as the Marines stormed ashore.

Japanese navy fights back in Guadalcanal: Crashed aircraft and the transport USS George F. Elliott burn off Guadalcanal on August 8, 1942, following an attack by Japanese bombers and torpedo planes. In the early morning hours of August 9, seven Japanese cruisers and a destroyer slipped past U.S. picket vessels in the darkness. In 32 minutes during this Battle of Savo Island, the Japanese sank four Allied heavy cruisers and a destroyer, killing 1,270 officers and men at virtually no loss to themselves.

America's first modern battleship: The USS North Carolina, the first of the U.S. Navy's modern battleships, participated in the invasion of Guadalcanal in August 1942. Though damaged by a torpedo on September 15, it returned to action, participating in operations throughout the Pacific. Its role was to screen carriers from air and surface attack and use its big guns to soften enemy island defenses prior to amphibious assault. The North Carolina received 15 battle stars for service during the war, more than any other U.S. battleship. It was decommissioned in 1947.

Find out about the major World War II events that took place in mid-August 1942 on the next page.

By the opening of the Pacific war, the Japanese had mastered the art of unopposed landings against undefended or lightly defended coastlines. This skill was repeatedly demonstrated on Southeast Asian coasts in the first few months of the Pacific war.

The Japanese, in fact, were the first practitioners of modern amphibious landings using purpose-built craft. In the initial Pacific campaigns, the hallmarks of Japan's highly effective amphibious doctrine were thorough planning, local air and naval superiority, and surprise, achieved notably through night landings. What the Japanese never developed was a capability in amphibious assault, such as that developed by the U.S. Marine Corps.

The disastrous Gallipoli campaign of 1915 largely discredited amphibious operations. But in the interwar years, the U.S. Marine Corps -- looking for a distinctive role to justify its separate existence -- decided to specialize in amphibious assault, coordinated landings in the face of a heavily defended shoreline. The Marine Corps Schools published a Tentative Manual for Landing Operations in 1934. In the remaining prewar years, the corps won some interservice support for its increasingly refined doctrine. Moreover, some actual landing craft were developed.

Guadalcanal marked the Pacific debut of U.S. amphibious forces. The Marine landing there was hastily planned and executed, and the failure to secure lines of communication might have been disastrous for inferior troops. General Douglas MacArthur in the South West Pacific Area and Admiral William Halsey in the South Pacific improved the doctrine through increasingly large and sophisticated operations, and the development of better and, especially, bigger vessels.

Bypassing enemy forces was often impractical in the central Pacific, where routines had to be developed for attacking heavily fortified beaches where surprise was impossible. The bloody experience of Tarawa helped improve this doctrine, which involved preliminary bombardment of the enemy positions, for days or even weeks, then armored amphibians landing in daylight.

By 1945 the routine was so effective that the Japanese gave up resisting the beach landings and instead tried to stop the attackers inland.