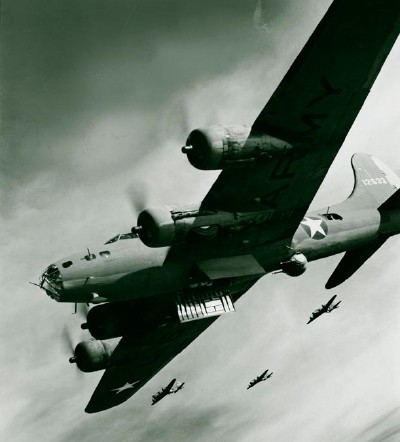 On December 2, 1942, physicists achieve the first nuclear chain reaction, a breakthrough that will make atomic weaponry a reality. Learn about this and the other important World War II events that occurred during the month of December 1942 below.

December 1: The United States institutes a gasoline-rationing program across the nation.

December 2: In a breakthrough that will make atomic weaponry a reality, University of Chicago physicists Enrico Fermi and Arthur Compton achieve the first nuclear chain reaction.

December 3: Attacking American bombers hamper the efforts of Japanese engineers to build an airfield on New Georgia in the Solomon Islands.

December 5: The Nazi German hospital ship Graz sinks after being torpedoed off the coast of Libya.

December 7: More than 700 young German Edelweiss Pirates, a group formed in response to the rigidity of the Hitler Youth movement, are arrested by the Gestapo in Düsseldorf, Cologne, and several other cities.

The USS New Jersey, the largest battleship in the U.S. fleet, is launched from the Philadelphia Navy Shipyard on the first anniversary of the Japanese attack on Pearl Harbor.

December 8: Spanish dictator General Francisco Franco delivers a speech in Madrid. He defends his Axis alliance by claiming he'd rather be a Fascist than a Communist.

December 11: Adolf Hitler orders that the surrounded and besieged German Sixth Army may not retreat from Stalingrad.

December 13: The "Shark" Enigma code, which was especially difficult to crack due to its use of an extra rotor, is finally deciphered. This intelligence breakthrough allows the Allies to resume intercepting Nazi German communications to U-boats in the Atlantic.

Below are more highlights and images that outline the details of World War II, such as the involvement of African American soldiers in the war.

B-17 Flying Fortresses have mixed results: Above, B-17 Flying Fortresses bomb Lae, New Guinea. Many B-17s were destroyed on the ground by Japanese attacks in the opening days of the war, and the heavy bombers that survived attempted to interdict enemy shipping, with mixed results. Pacific-based B-17s proved more useful in attacks against enemy bases in the island-hopping campaign that followed Midway. The B-17 was tough, though early models were vulnerable to attack from the rear. The "belly gunner" also faced a horrifying fate if the plane was forced to land without its landing gear.

Barbed-wire beaches on Hawaii: Once a vacation retreat for the rich and famous, the Royal Hawaiian Hotel was leased by the U.S. Navy as a major rest and relaxation center for military personnel. The average stay was 10 days at $1 a day for officers and a quarter for enlisted men. Barbed wire in front of the Royal Hawaiian stretched the length of Waikiki Beach. An air of suspicion existed across the rest of the Hawaiian Islands because approximately 118,000 civilians were of Japanese descent. Plans had been developed to evacuate 100,000 to the continental U.S., but when discussion ended, only about 1,000 were transferred.

Five brothers killed in action: "I am writing to you in regards to a rumor going around that my five sons were killed in action in November," Alleta Sullivan began in a letter to the Bureau of Naval Personnel. Soon after she sent the letter, she learned that all five of her sons serving on the USS Juneau had not survived its sinking in November 1942. The War Department turned this tragedy into a propaganda piece by sending the boys' parents on a lecture tour across the United States and by having Mrs. Sullivan christen the USS The Sullivans on April 4, 1943. The tragedy led to a Navy policy that discouraged family members on the same ship.

Find out about the key World War II events that took place during the remainder of December 1942 in the timeline on the next page.

In April 1944, nine African American soldiers were denied service at several establishments in Texas. As they left, "about two dozen German prisoners of war, with two American guards came to the station," remembered Corporal Rupert Trimmingham, one of the black soldiers. "They . . . had their meals served, talked, smoked, in fact had quite a swell time. . . . I could not help but ask myself why they are treated better than we are?"

In the 1940s, the segregation of African Americans was not limited to civilian life. About 909,000 black Americans served in the Army during WWII, but most of these recruits were assigned to support details because military leaders questioned their ability to perform effectively in combat.

Two all-black infantry divisions, the 92nd and 93rd, were led by white officers, some of whom were openly racist. Morale was low in these units due to substandard facilities, poor training, low pay, and inferior commanders. The 93rd was shipped to the Pacific and showed promise in its first few fights. It was later split up, with its troops assigned to support positions.

The 92nd Division, nicknamed the Buffalo Division, had mixed success in Italy. By the end of fighting, the division had suffered about 22 percent casualties while earning about 12,000 decorations. Its erratic performance in the field, due primarily to ineffective leadership, damaged the division's reputation and reinforced the stereotype that African Americans were unfit for combat.

Tuskegee, Alabama, became the training site for black pilots. The 99th Fighter Squadron and the 332nd Fighter Group were two of the units formed from its graduates. The 99th was inadequately trained when it was sent into combat, and its poor performance placed the Tuskegee program in jeopardy.

Given a second chance, these airmen eventually proved themselves in combat. By the end of the war, almost 1,000 pilots had graduated from Tuskegee and earned more than 850 medals. The 332nd Fighter Group, nicknamed the "Red Tail Angels," earned fame as the only escort group that did not lose a bomber to the enemy.