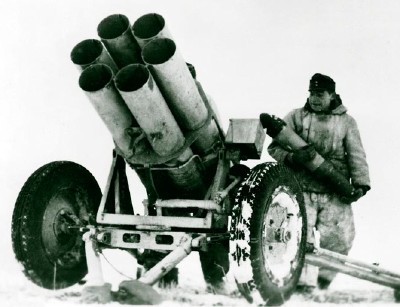 The existence of Nazi death camps is first officially made public on December 17, 1942, in the British House of Commons. Learn about this and the other important World War II events that occurred during the month of December 1942 below.

December 14: Despite an airlift of supplies, the German Sixth Army remains trapped, inadequately equipped, and under siege in Stalingrad. The airlift is hindered by the weather, the Red Air Force, and the need to use many transport planes to support Axis forces in Tunisia.

December 16: Adolf Hitler issues a directive that Germany is to be purged of Gypsies, and anyone with any amount of Gypsy blood is to be sent to "resettlement" camps in the East.

December 17: An Allied official makes the first public statement confirming the Nazi death camps when British foreign secretary Anthony Eden tells the House of Commons that Adolf Hitler has begun to make good on his threat to annihilate Europe's Jews.

Vichy admiral François Darlan announces that French ships and resources at North African ports will be at the disposal of the Allied cause.

December 28: Despite the wartime alliance between the two nations, Franklin Roosevelt admonishes the Los Alamos science-research team against sharing atomic secrets with the British.

December 31: In the Barents Sea north of Norway, Nazi German ships attack a British convoy that is attempting to deliver materiel to the Soviet Union.

Below are more highlights and images that outline the details of World War II, including weapons and propaganda used during the war.

Soviets take revenge on German POWs: During the winter of 1941-1942, and again the following winter, Nazi German mechanized transport, tanks, artillery, and aircraft froze up, while frostbite killed and maimed inadequately clothed soldiers. Since Adolf Hitler still banned retreat, capture must have seemed a better option to many Nazi Germans. However, the Soviets took revenge for the crimes that Nazi Germans had committed against civilians during the invasion. The Soviets executed some POWs and sent others to work camps, where many died of exposure, starvation, and overwork during forced labor. Nearly 500,000 of the more than three million prisoners taken by the Soviet Union died in captivity.

Multibarrel rocket-launcher has psychological impact on enemy: Early during Operation Barbarossa, the Wehrmacht noted the efficacy of the Red Army's multibarrel rocket-launchers and quickly dev­eloped similar weapons, with the six-barrel, 150mm Nebelwerfer ("fog launcher"; pictured above) entering service in 1942. Over a 10-second period, while operated by a four-man crew, it fired salvos of six projectiles up to 7,000 meters.

Due to the heat and blast it produced, the Nebelwerfer was fired electrically from a position 10 meters away. With great trails of fire, smoke, and a whistling noise in flight, the weapon simultaneously inflicted destruction and had a deleterious psychological impact on the enemy. It was nicknamed "Moaning Minnie" by Allied troops.

Europeans use mythology as propaganda: European nations drew on history, heroic legends, and mythology to build nationalism, inspire their citizens, and spur their militaries to action. In the Soviet Union, propaganda posters compared 1942 to 1242, the year when Russian prince Alexander Nevsky led his troops in a rout of German invaders. In Germany, Hitler presented his Third Reich as the successor to the Holy Roman Empire and claimed to be establishing the 1,000-year utopia predicted in millenarian stories. In Italy, Mussolini justified expansionism as the creation of a New Roman Empire.

German brutality in Russia: In 1942, a young woman from a village near Moscow was hanged by Nazi German troops. Although beaten and tortured, she gave her captors no information before her death. A photograph of the hanging was found on the body of a Nazi German officer killed in action near Smolensk. The woman's defiance and the officer's grotesque souvenir both testify to a fierce antipathy between Nazi Germans and Slavs -- a loathing that helped make the Eastern Front a particularly brutal theater of operations.

The major World War II events of early January 1943 can be found on the next page.

In 1939 Poland's cavalry famously fought against the invading Nazi Germans. Both Nazi Germany and the Soviet Union used large cavalry forces on the broad steppes of Russia and the Ukraine, including Cossacks fighting on both sides.

A Soviet cavalry corps once operated behind Nazi German lines for four months. Italian mounted cavalry had some success in Russia. Two cavalry divisions served in the Waffen-SS, and the Nazi German army formed more units later in the war.

Though the popular image of the Wehrmacht is of panzers, it remained dependent upon 5,000-plus horses in each infantry division for the war's duration. More than 600,000 animals drew Nazi German artillery and transport wagons in the advance into the Soviet Union. They suffered terribly, with 180,000 dying in the winter of 1941-1942 alone.

In July 1944 in France, British and Canadian troops in the Falaise Pocket saw the horrific effects of Allied air attacks on the congested horse-drawn transport of Panzer Group West.

While the U.S. Cavalry was mechanized by the end of 1941, the 26th Cavalry Regiment of the Philippine Scouts is said to have made the last American charge, on the Bataan Peninsula in January 1942. Britain mechanized its last cavalry division in Palestine in 1941, but the Burma Frontier Force made a suicidal charge against the Japanese at Toungoo in March 1942.

The Japanese in turn used cavalry regiments in China and mule transport in the rugged terrain of New Guinea and Burma, as did their opponents there and in Italy.