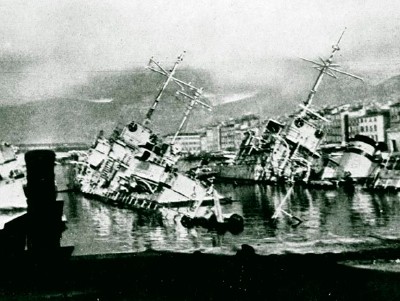 The Chinese Nationalists form an official alliance with the United States and Britain on January 11, 1943. Learn about this and the other important World War II events that occurred during the month of January 1943 below.

January: The German Sixth Army, trapped in Stalingrad, is in desperate need of food and supplies the men need to survive.

January 1: Americans' annual salaries are capped at $25,000, part of a short-lived plan designed to curb inflation. The law will be repealed within the year.

January 5: In an effort to put a stop to the Axis practice of seizing property and goods from occupied nations, 18 Allied nations agree that property transfers and similar business conducted under Nazi German or Italian occupation can be declared null and void at the discretion of the occupied government.

January 6: Ion Antonescu's forces detain and execute scores of disbanded Fascists after another attempt by the Iron Guard to wrest away control of Antonescu's Romanian government.

January 10: A Soviet force of nearly 300,000 men closes in on the surrounded Nazi German Sixth Army at Stalingrad following the refusal of Nazi German general Friedrich Paulus to negotiate a surrender.

January 11: The Chinese Nationalists form an official alliance with the United States and Britain. This comes two days after their Japanese-puppet counterparts in Nanking declared war against the Allies.

Below are more highlights and images that outline the events of World War II, including the first artificial nuclear chain reaction.

French scuttle warships before handing them over to Nazis: When the Nazi Germans invaded France, they signed the armistice of 1940 with the Vichy government. This agreement stipulated that the French navy would disarm and remain in its ports, including Toulon. When the Nazi Germans learned that the fleet there was possibly on the verge of joining the Allies, they broke the armistice and attacked Toulon. Before the ships fell into the Nazis' hands, they were scuttled on November 27, 1942 (pictured above). The sunken ships included three battleships, 15 destroyers, 13 torpedo boats, 12 submarines, and more than 80 additional vessels.

Scientists create first artificial nuclear chain reaction: A number of scientists and dignitaries gathered together on December 2, 1942, on a platform next to a large oblong structure of bricks and wooden timbers. They were in a racquet court under the west stands of Stagg Field at the University of Chicago. Physicist Enrico Fermi closely monitored a set of instruments, and at 3:25 p.m. directed a colleague to withdraw a rod from the structure. For 28 minutes, Fermi and onlookers witnessed the first artificial self-sustaining nuclear chain reaction. The experiment produced only about 1/2 watt of controlled energy, but it was the first step in developing the atomic bomb.

Government provides temporary housing for war defense plant workers: Above, Mrs. Emma D. Gaw serves dinner to her husband, a worker at the Glenn Martin aircraft plant, in their trailer home in Middle River, Maryland. New or expanded war defense plants attracted tens of thousands of workers, creating a critical need for employee housing. The U.S. government eventually produced about two million dwelling units for workers nationwide, ranging from temporary economy units and trailers to dormitories and converted apartment buildings. Due to wartime shortages, temporary housing was constructed with materials that did not meet prewar standards.

Ernie Pyle chronicles the war: Ernie Pyle's coverage of the war began in 1940 when he traveled from his home country, the U.S., to England to write stories of the London Blitz. In November 1942, he joined American troops in North Africa and beyond. His stories of GIs in combat brought the true experiences of sons and husbands to the families back home. In 1945 he wrote to his wife about the war: "I've been part of the misery and tragedy of it for so long that I feel if I left it, it would be like a soldier deserting." On April 18, 1945, Pyle was killed by a sniper on Ie Shima, an island west of Okinawa.

Allied propaganda thrived in comic books, pulp novels, radio, and movies. Spy Smasher appeared in a movie serial in 1942, as did Captain America in 1944. Perhaps the most unlikely propaganda superhero was Sir Arthur Conan Doyle's Victorian detective, Sherlock Holmes. Played by an implausibly ageless Basil Rathbone, Holmes matched wits against the Nazis in a series of wartime movies.

British intern enemy aliens: The British government's wartime policy of restricting or interning most enemy (German, Austrian, and Italian) aliens residing in Britain or arriving as refugees was unedifying and frequently unfair. However, it was an inevitable consequence due to the fear of spies, "fifth columnists" (subversive agents), and Nazi collaborators. Some 73,000 people were interned under military guard in temporary camps, partially constructed housing estates, and on the Isle of Man, or they were deported to Canada and Australia. Such indiscriminate government action provoked a public outcry. By mid-1941, only 5,000 detainees remained in custody.

The next section addresses the key World War II events that took place during mid-January 1943.