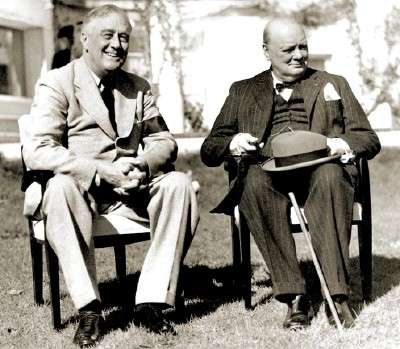 Friedrich Paulus surrenders to the Red Army at Stalingrad on January 31, 1943. Learn about this and the other important World War II events that occurred during the month of January 1943 below.

January 21: Six teachers and 38 students, most under the age of seven, are killed when the Luftwaffe destroys the Catford Central School for Girls during a bombing raid of London.

January 22: Adolf Hitler refuses to consider the surrender of his forces at Stalingrad despite a desperate message from General Friedrich Paulus reporting dire conditions on the ground.

January 23: The British Eighth Army captures Tripoli, the capital of the Italian colony of Libya.

January 29: Dr. Ernst Kaltenbrunner takes the post in Adolf Hitler's inner circle vacated by the assassinated Reinhard Heydrich. Kaltenbrunner will oversee the death camps, the Einsatzgruppen, the SS, and the Gestapo.

January 30: As Nazi Germans in Berlin gather to observe Adolf Hitler's 10th anniversary as Führer, RAF bombers sweep down over the city in their first daytime raid on the Nazi German capital.

The H2S bombing radar, a device that displays the contours of the ground below a bomber, is made operational by the RAF.

January 31: To Adolf Hitler's disgust, newly promoted field marshal Friedrich Paulus surrenders to the Red Army at Stalingrad. Hitler made the promotion because no field marshal in Nazi German history had surrendered.

Below are more highlights and images that outline the events of World War II, including the surrender of General Friedrich Paulus to the Soviets in Stalingrad.

U.S. takes control of Guadalcanal: By January 1943, the Japanese conceded defeat and started to evacuate surviving troops from Guadalcanal. As the war moved on, U.S. engineers transformed the island into a bustling rear-area base, complete with full amenities. The campaign had cost Japan nearly 25,000 dead, irreplaceable resources, and control of the central portion of the Solomon Islands. At a cost of approximately 1,600 Marines and soldiers killed, the U.S. had turned the tide of the ground war in the Pacific.

Franklin Roosevelt, Winston Churchill meet in Casablanca: President Franklin Roosevelt and Prime Minister Winston Churchill met in Casablanca, Morocco, January 14-24, 1943. Because the strategy to defeat the Nazis was discussed, the Combined Chiefs of Staff also attended. The leaders agreed that the campaign against the U-boats must have the highest priority in 1943. They also agreed on a combined bomber offensive against Nazi Germany. A landing on Sicily was to follow the end of the fighting in Tunisia, and might in turn be followed by a landing in Italy. They also decided to make public their policy that the war against Nazi Germany, Italy, and Japan would end only with the unconditional surrender of those enemies.

Friedrich Paulus surrenders in Stalingrad: In November 1942, surprise Soviet offensives isolated the Nazi German Sixth Army in Stalingrad, led by General Friedrich Paulus. Adolf Hitler refused to allow Paulus to break out while escape might have been possible, even though the Nazi German forces were not equipped with sufficient clothing, food, or medical supplies to withstand the Soviet winter. On January 30, 1943, the Führer promoted Paulus to Generalfeldmarschall, assuming that a man of such rank would either fight to the death or commit suicide rather than surrender. Paulus, hoping to save some of his men, is seen above surrendering to the Soviets on January 31.

The Nazi German casualties of Stalingrad: The Battle of Stalingrad has been called the bloodiest battle in history. More than a million Nazi Germans and Soviets (combined) were killed, wounded, or captured. The 91,000 taken as Russian POWs were already exhausted, starving, and weakened by disease and untreated wounds. Only 6,000 of them would survive the overwork and malnutrition of Soviet labor camps and return home after the war. Some of the 22 captive senior officers, including General Friedrich Paulus, signed anti-Hitler statements that were used in Soviet propaganda broadcasts.

Bernard Montgomery both despised and admired: General Bernard "Monty" Montgomery, wearing his trademark beret with two badges, inspired conflicting emotions in others, ranging from fury to fierce loyalty. Montgomery was deeply disliked by many of his officers for the discipline he imposed on them, and deeply admired by his soldiers for the confidence he instilled in them. He was frequently at odds with other Allied generals.

For example, his vain and boastful personality provoked legendary quarrels with the equally vain and boastful General George Patton, and General Dwight Eisenhower considered him a limited strategist. Above all else, Monty was methodical, cautious, and reluctant to throw away the lives of his men -- characteristics that made him slow but highly effective.