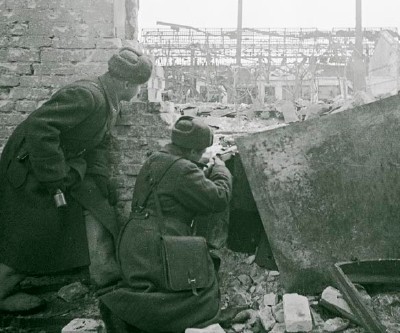 On August 26, 1942, about 500,000 Nazi German and Romanian soldiers attacked the Red Army near Stalingrad. Learn about this and the other important World War II events that occurred during 1942 below.

August 23: The fortifications around Stalingrad are beginning to succumb to the endless Nazi German onslaught, as some 600 Luftwaffe planes bomb the city.

August 25: The plane carrying the Duke of Kent (brother of King George VI) crashes in Scotland en route from Britain to Iceland. He becomes the first member of the modern Royal Family to die on active duty.

August 26: As many as a half-million Nazi German and Romanian soldiers attack the Red Army near Stalingrad.

August 28: The first of thousands of Japanese-launched incendiary balloon bombs fall on an Oregon forest.

September 5: Allied leaders determine that the invasion of northwest Africa, code-named Operation Torch, will include the landing of troops near Casablanca, Morocco, as well as Oran and Algiers, Algeria.

September 8: In a national broadcast, Franklin Roosevelt characterizes the global conflict as "the toughest war of all time."

September 10: In a speech before the House of Commons, Winston Churchill reports that troops have been sent to India to quell the revolutionary impetus of the Congress Party.

Nazi Germany makes a renewed attempt to disrupt American East Coast shipping when a U-boat plants 12 mines in and around the Chesapeake Bay.

Below are more details that outline the events of World War II that followed the Nazi German invasion of the Soviet Union.

Soviets hold strong at Stalingrad: Ferocious Soviet resistance at Stalingrad stalled the Nazi German military juggernaut that had smashed through Russia. Even though Nazi German bombardment had turned 80 percent of the city to burnt rubble and killed tens of thousands of civilians, the Soviets held fast.

Soldiers fight among the rubble in Stalingrad: When Nazi German troops reached the suburbs of Stalingrad on August 23, 1942, they found little more than ruins. But Nazi German claims to victory were cut short by Russian soldiers and civilians fighting back from those remains. The war broke down into smaller battles in which, as a Nazi German general said, "The mile, as a measure of distance, was replaced by the yard. . . ." Above, in the fall of 1942, Soviet soldiers fight the enemy in an area already devastated by warfare.

German troops meet strong resistance in Stalingrad: Even when the Germans had taken most of Stalingrad, they met strong resistance in the city's northern industrial areas. Factory workers joined militias, produced tanks and weapons (which they sometimes took into battle themselves), and repaired damaged Soviet tanks near or on the battlefield. Raging conflicts at the Red October steel factory, Dzerzhinsky tractor factory, and Barrikady gun factory lasted far beyond Nazi expectations.

Soviets move factories out of the enemy's reach: Within a short time of the Nazi German invasion of the Soviet Union, they captured an area that contained 40 percent of the Soviets' population, 60 percent of the armament industries, and vast deposits of its natural resources. The Soviet leadership decided to move any major manufacturing plants not yet in Nazi German hands out of the enemy's reach, relocating them to the Ural, Volga, and Siberia regions. Plant workers were also shipped to these areas, even though they were unprepared for the severe weather and poor living conditions. Those industries that would remain closer to the Soviet cities were moved underground to escape Nazi German bombers and artillery.

Check out the next page for a timeline and headlines of World War II events that occurred during mid-September 1942.

On the flat plain were thousands of bodies, tossed like broken dolls onto the ground. Most were Russians, victims of German artillery and Stukas. At the height of the bombardment, Petrov saw a tiny figure, no more than three feet high, waving his arms wildly. Amazed, Petrov looked more closely and saw that it was the upper body of a Russian soldier. Beside it on the ground lay a pair of legs and hips, neatly severed by a shellburst.

The man was looking at Petrov and his mouth opened and closed, sucking air, trying to communicate one last time. Petrov gaped at the apparition until the arms stopped flailing, the mouth slackened and the eyes glazed. Somehow the soldier's torso remained upright and forlorn beside the rest of the body.

-- Historian William Craig, describing a moment during the Battle of Stalingrad, December 1942