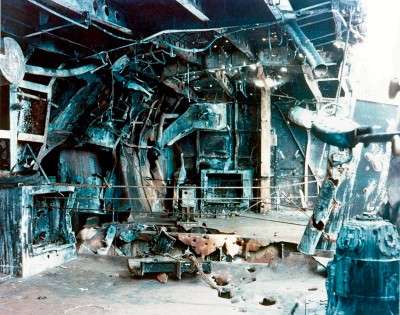 The British Royal Air Force (RAF) attacked Düsseldorf, Germany, on September 10, 1942. Learn about this and the other important World War II events that occurred during the month of September 1942 below.

September 10: Düsseldorf is in flames following an intense, one-hour RAF raid that dropped more than 100,000 firebombs on the German city.

September 12: The British liner Laconia is torpedoed and sunk off Ascension Island in the South Atlantic. To the horror of the attacking U-boat crew, some 1,500 Italian POWs are among the victims. The U-boat crew attempts to rescue the Italians but comes under heavy American aircraft fire, leading Nazi Germany to decide to repudiate a 1936 accord calling for the rescue of vanquished crews.

Some 1,200 Japanese die in a desperate bid to wrest control of Guadalcanal's Henderson Field from the U.S. Marines.

All Vichy French men 18 to 50 years of age, and single women ages 20 to 35, are ordered to labor for the Reich's war machine.

September 14: The U.S. emerges victorious from the Battle of Bloody Ridge at Guadalcanal when a large Japanese contingent is forced into retreat by 11,000 U.S. Marines.

September 15: The carrier USS Wasp goes down in waters south of Guadalcanal after being torpedoed by a Japanese submarine.

September 18: The shipping lanes into Charleston, South Carolina, are mined by a Nazi German U-boat.

September 20: General Dwight Eisenhower and his military team decide to schedule Operation Torch, the invasion of the French protectorate of Morocco and the colony of Algeria, for November 8.

The situation in Stalingrad has so deteriorated that Nazi German and Soviet troops are engaging in house-to-house combat on the streets of the devastated city.

Below are more highlights and images that outline the events of World War II, as well as more information about the Japanese army.

The USS Enterprise survives bombing: Above, a gun position lies in ruins after bombs struck the USS Enterprise on August 24, 1942. A veteran of Midway and the Doolittle Raid, the "Big E" survived thanks to efficient damage control. The carrier was struck again in the Battle of the Santa Cruz Islands, but went on to participate in the Naval Battle of Guadalcanal, the "Great Marianas Turkey Shoot," the Battle of Leyte Gulf, and numerous other engagements, receiving 20 battle stars for World War II service. Though struck by a kamikaze off Okinawa in May 1945, the Enterprise survived the war and was decommissioned in 1947.

Finland fights alongside Nazi Germany: A Finnish combat patrol breaks into a Soviet position in 1942. Finland had lost some 16,000 square miles to a 1939-1940 Russian onslaught known as the "Winter War." From 1941 to 1944, in hopes of regaining that territory and perhaps more, Finland allied with Nazi Germany against Russia. Though they were dependent on Nazi Germany for food, fuel, and weapons, the Finns did not go along with most Nazi policies. They maintained a democratic government, kept armed forces from falling under Nazi German control, and did not persecute native Jews.

Japanese airmen lose their edge: Japanese naval pilots in the Pacific were without equal at the start of 1942. Training was highly selective. Of 1,500 naval pilot applicants in early 1937, only 70 were accepted and only 25 graduated. The lengthy program required 260 to 400 hours of basic flight training, followed by gunnery, combat tactics, and carrier operations. This training regimen broke down in the latter months of 1942, as pilot losses soared in the battle for air supremacy over the Solomons. The qualitative edge dulled and then vanished as veteran Japanese pilots were killed and the vacuum was filled by hastily trained replacements.

Find a timeline and headlines of the major World War II events that occurred in late September and early October 1942 in the next section.

The Japanese Army had spent decades preparing for confrontation with the Soviet Union on the plains of Manchuria. The China war and the war in the Pacific brought not only different battle environments but different enemies -- one the Japanese failed to fully understand.

In the Pacific, the Japanese war plan called for a wave of attacks on American, British, and Dutch forces throughout the Pacific. Planners anticipated a short, intense conflict that would end to their advantage with a negotiated peace. Little consideration was given to the possibility of failure or to contingency planning should Japan unexpectedly find itself involved in a protracted war.

This heady optimism was inherent in the very fiber of the Japanese army. Rank and file were certain that their "warrior spirit" would prevail over weak-willed Westerners, even if faced by superior numbers or firepower. Emphasis was largely on offensive action.

The Japanese soldier -- whether a general conducting a campaign or a private manning a machine gun -- was expected to fulfill his duty or die in the attempt. To question orders was a shameful sign of weakness. Since failure was not allowable, there was little call for tactical flexibility or deviation from the plan once underway.

The result was disaster. Campaigns such as those in Guadalcanal and New Guinea were pressed long after they were lost. Japanese troops in the field launched attacks that followed failed plans and satisfied their warrior code but had little impact beyond their own destruction.

The absence of long-range programs such as army pilot rotation also began to bear bitter fruit as the war dragged on past expectations. Lack of search-and-rescue capability meant that highly trained pilots who went down with their planes were lost. As the small pool of experienced pilots died in combat, they were replaced by rookies who were easy game for enemy fighters.

In their failure to appreciate their enemy's resolve and their own flawed mind-set, the Japanese contributed to their own defeat.