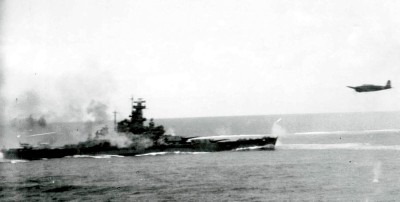 On November 8, 1942, Vichy France severed diplomatic ties with the United States. Learn about this and the other important World War II events that occurred during the month of November 1942 below.

November 5: General Dwight Eisenhower opens the operational headquarters for the Allied invasion of North Africa on the British island of Gibraltar.

November 6: Angling one more time for a second European Front, Joseph Stalin complains that the Soviets are dealing with the far greater Axis force while the British and Americans concentrate on the comparatively quiet North African front.

General Douglas MacArthur arrives in Port Moresby, the capital of Papua New Guinea, to supervise operations in that sphere of the Pacific Theater.

November 8: Allied forces land at their North African targets, with Algiers capitulating almost immediately. The U.S. and Britain plan to use occupied North Africa as a base for launching operations against Southern Europe.

Vichy France announces the severing of diplomatic ties with the United States following the invasion of French North Africa.

November 9: Units of the German and Italian armies occupy Tunisia without opposition by the French colonialists.

November 10: In a Mansion House speech covering Britain's victory over Erwin Rommel, Winston Churchill famously quips, "This is not the end. It is not even the beginning of the end. But it is, perhaps, the end of the beginning."

All traffic into and out of one of the world's busiest ports ceases for two days when it is discovered that the Nazi Germans have mined the waters off New York Harbor.

November 11: Adolf Hitler ends the armistice between Free and Vichy France, occupying the entire country north of the Riviera.

The Moroccan city of Casablanca falls to the Allies.

Below are more details that outline the events of World War II, including the Battle of the Santa Cruz Islands.

House-to-house fighting ensues between Nazi Germans and Soviets: The Soviet tactic of "hugging" -- keeping their soldiers close to or even intermingled with the enemy -- nullified Nazi air and artillery superiority. It reduced the war to house-to-house fighting, which the Nazi Germans called Rattenkrieg (rat war). In October 1942, a Nazi German officer wrote, "We have fought for fifteen days for a single house with mortars, grenades, machine guns and bayonets." He added that the battlefront had become "a corridor between burnt-out rooms" or "a thin ceiling between two floors."

The Santa Cruz engagement pitted two U.S. carriers and support ships against four Japanese carriers and their support. U.S. pilots damaged two enemy carriers and a cruiser, but the carrier USS Hornet and a destroyer were sunk in the exchange.

The Japanese claimed a tactical victory, but their failure to crush U.S. naval forces in the Solomons left the strategic advantage with the Americans. Indeed, Japanese losses in precious first-line aircrews made the battle a far greater Japanese defeat than Midway.

manned versions painted with shark teeth, fought the Japanese in China. P-40 fighters were built in the United States and flew with virtually every Allied air force. They proved valuable in France and with the RAF over the North African desert, and they shot down Japanese aircraft at Pearl Harbor in December 1941. Though not especially fast, they were stable and tough. More than 14,000 were built, and numerous versions and designations existed, including Hawk, Mohawk, Tomahawk, Kittyhawk, and, most commonly, Warhawk.

Lewis Burwell Puller becomes most decorated Marine: Lieutenant General Lewis Burwell Puller was the most decorated Marine in U.S. history. He received five Navy Crosses, a decoration second only to the Medal of Honor. Nicknamed "Chesty" on account of his barrel chest, Puller was a gruff, no-nonsense warrior. Shown a new-model flamethrower, he is said to have growled, "Where do you put the bayonet?" Puller earned his third Navy Cross when his outnumbered battalion fought off a Japanese attempt to seize Henderson Field on the night of October 24-25, 1942, and he earned a fourth for the Cape Gloucester campaign. Puller earned his fifth Navy Cross for heroism during the Korean War. He retired in 1955.

The Persian Corridor opens up supply line to Soviets: The Soviet Union and the British government became allies following the Nazi German invasion of the USSR. The Soviets were in desperate need of supplies, but a secure supply line had to be opened. They chose the newly completed Trans-Iranian Railway as the Persian Corridor to open the supply line from the Persian Gulf to the Soviet Union. Necessary permissions were secured from Iraq and Iran to use the corridor. Once the United States entered the war, it sent troops to guard and maintain the railway.

Find out about the other key World War II events of November 1942 on the next page.