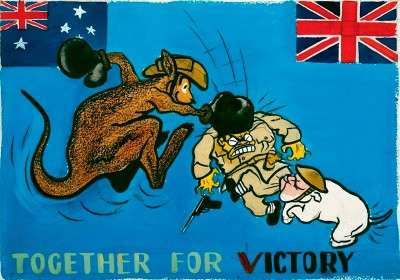 March 1940 brought major developments in World War II, including Adolf Hitler outlining his plan to invade Norway and Denmark. Below is a World War II timeline tracing this and other important events of March 1940.

March: According to the BBC, two out of three British citizens listen to "Lord Haw-Haw," the "omniscient," traitorous announcer of the German propaganda radio show Germany Calling.

Adolf Hitler orders his generals to create a plan for the invasion of Norway and Denmark.

March 2: The Allies ask Sweden and Norway for the right to cross their territory for the purpose of sending troops to reinforce a flagging Finnish force, but are refused.

March 6: A delegation leaves Helsinki for Moscow to negotiate the terms of Finland's surrender to the Soviets.

March 7: The Queen Elizabeth, the new flagship of Cunard's luxury liner fleet, arrives in New York at the end of a daring high-speed crossing of the German U-boat-infested Atlantic.

March 9: A belated offer of troops and material support from the Allies is relayed to Helsinki.

March 11: The United States has relaxed its arms embargo for its once and future allies, selling several P-40 fighters to Britain and France.

March 12: Marched for some 18 hours in a blizzard, 72 of 1,000 German Jewish deportees succumb to the elements in Lublin, Poland.

The Soviet Union and Finland sign a peace treaty in which Finland surrenders substantial strategic territory, including the city of Viipuri and the port of Hangö. The new order comes at a cost of some 25,000 Finnish lives and the deaths of nearly 70,000 Soviets.

March 14: Some half-million Finns pour out of the Soviet-occupied territory shortly after the cessation of hostilities.

Below are more images and headlines detailing events from World War II in March 1940.

Britain and Australia ally to fight Japan: This piece of Allied propaganda, which emphasizes a cooperative effort against Japan by Australian and British forces, is not entirely accurate. Australia entered the war against Germany in 1939, sending troops to the Middle East in accordance with British strategy. Volunteer Australian soldiers proved to be top-notch, despite the impact of prewar monetary cuts on military preparedness. However, Australian strategy changed with Japan's entry into the war in 1941 and the potential invasion of Australia itself. Preoccupied with the German threat, Britain was not able to guarantee support, and Australia turned to the United States instead.

On March 18, 1940, Adolf Hitler met with Benito Mussolini to discuss Italy joining the war. This and other events from March of 1940 are discussed on the World War II timeline next.

When war broke out in September 1939, Sweden declared its neutrality as it had in every European conflict since 1814. Swedes opened their doors to those at risk of capture and imprisonment by Nazis. They sheltered almost 8,000 Jewish refugees in 1943, protected 44,000 Norwegians fleeing from German occupation, and sent one of the true heroes of the war, Raoul Wallenberg, to Hungary to save the lives of thousands of Jews. While Swedish citizens took pride in their humanitarian efforts, most of them did not know that their government was also providing important resources to the Nazis.

Sweden remained neutral when the Germans invaded Denmark and Norway in April 1940, and the nation resisted Germany's request to allow its troops to travel along the Swedish railroad. However, this resolve weakened as the war progressed and when it looked like no nation could stop the Nazi conquest. The Swedish government permitted German troops to travel its railroads to Norway in June 1940, and to transport a whole division from Norway to Finland for its invasion of the Soviet Union.

Swedish cooperation with the Nazis did not end with transportation. The Swedes supplied Germany with about 30 percent of the iron ore the Germans used to manufacture weapons. Sweden also provided credit to the Germans, who repaid their debt with gold, including 13 tons of gold that the Nazis had stolen from Belgium and the Netherlands. Sweden's support continued until it became apparent that an Allied victory was inevitable.