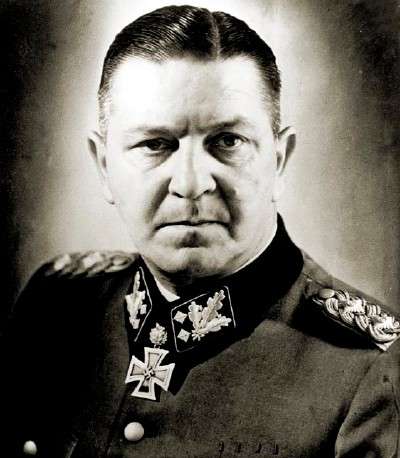 March 1940 proved significant in World War II as Adolf Hitler met with Benito Mussolini on March 18 to discuss Italy's potential involvement in the war. This and other important events are detailed in the World War II timeline below.

March 14: The Polish government, operating in exile in France, reveals that Adolf Hitler attempted to persuade Poland to join him in an invasion of the Ukraine.

Nazi Reichsmarschall Hermann Göring orders all German citizens to surrender any metal that may be recycled into war material.

Japan's new Zero fighter planes prove formidable when 12 return from an encounter with Chinese fighters over Chengtu, having destroyed 27 of 30 Chinese planes with no casualties of their own.

March 16: James Isbister, of the Scottish village Bridge of Waithe, becomes the first United Kingdom civilian killed in an air raid since the First World War.

March 18: Adolf Hitler meets with Italian dictator Benito Mussolini to discuss Italy's entry into the war. It is determined that Mussolini's troops will attack France.

Having failed in his bid to convince Europe's belligerents to lay down their weapons, U.S. Undersecretary of State Sumner Welles departs Genoa, Italy, for his return voyage to the United States.

March 27: As diplomatic relations between the Allies and the Soviet Union become difficult because of Soviet aid to Germany, Paris requests the removal of the Soviet ambassador.

March 28: Britain and France agree to not act independently in establishing treaties with any third nation.

March 30: Japan establishes a Chinese puppet government in Nanking, which the United States refuses to recognize.

Below are more images and headlines about World War II, Nazi Germany, and the Allied forces.

Theodor Eicke appointed head of concentration camps: Theodor Eicke joined the NSDAP (the Nazi party) in 1928. As the Nazis rose to power, Eicke was appointed commandant of the Dachau camp in 1933. His brutal actions there impressed Heinrich Himmler so much that he was appointed inspector of concentration camps and SS guard formations in 1934. From 1939 until his death in combat in 1943, Eicke commanded the Waffen-SS Totenkopf ("Death's Head") division in the Polish, French, and Russian campaigns. The Totenkopf division committed numerous atrocities, such as machine-gunning 99 British soldiers who had surrendered to them at Dunkirk.

Norwegian officer Vidkun Quisling collaborates with Nazis: Vidkun Quisling (left), the man whose very name came to mean "traitorous collaborator," rides with SS head Heinrich Himmler, likely during Quisling's visit to see Adolf Hitler in December 1939. Quisling was a Norwegian military officer who helped form a Fascist political party in 1933, with himself as Fører (leader, comparable to Führer). When Germany invaded Norway in April 1940, Quisling made a radio news announcement declaring himself prime minister on behalf of the Nazis. Five days later, the Nazis threw Quisling out of power. However, in need of a Norwegian puppet, they reinstated him in 1942. After the war, Vidkun Quisling was convicted of treason and executed.

During Hitler's reign, paintings featured idealized images of a strong, peaceful, and pastoral Germany; of the Teutonic chivalry and military heroism of former times; and of the myths and legends of the Rhine. These concepts were fused with the physical strength, athleticism, and beauty thought to be exemplified by the Aryan man and woman, frequently pictured nude. Such emotive imagery generated sentiments and reactions ranging from selfless patriotism to blatant anti-Semitism and racism, from national pride to rampant militarism. Simplicity, realism, and heroism superseded all forms of modernism, such as impressionism, cubism, and Dada. Similar standards applied to German sculpture as well as to the architectural designs developed by Albert Speer for the grandiose new buildings of the Reich's capital.

The art that depicted "the true Germanic spirit" was set against the Entartete Kunst (degenerate art) of "lesser" cultures and peoples. The contrast reinforced the Nazi political and racist philosophy while simultaneously emphasizing Germany's heroic heritage. Nazi artwork contributed to the pageantry and martial spectacle for such events as the Nuremberg rallies of the 1930s.

In 1936 a German tribunal was established to purge the country of all Entartete Kunst. However, the Nazis' declared abhorrence of such works did not prevent them from looting many examples of it from the major galleries and museums of occupied Europe. More than 5,000 paintings -- including many by Goya, Rembrandt, and Rubens -- were transported to Germany along with thousands of other works of art. Hermann Göring and other senior Nazi officials accumulated personal art collections of immense value. While many of these items were recovered after the war, it was difficult to determine ownership and provenance. Disputes continued into the 21st century.