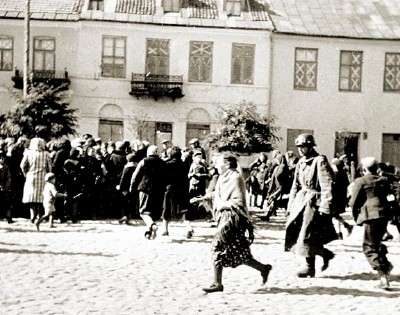 October 1939 saw Adolf Hitler and Nazi Germany begin to reveal their answer to the "Jewish question." The World War II timeline below highlights some of the important events of October 1939.

October 12: The Nazis begin to consolidate the Jewish population in Germany's occupied territories. They send Austrian and Czechoslovakian Jews to Poland.

The Soviet Union sends Finland a list of territorial demands, which include a land exchange and the right to establish military bases. Finland will reply with its own acceptable terms on October 14, but Russia will stand by its initial demands.

October 14: More than 800 sailors die when a German submarine torpedoes the Royal Oak, a British battleship.

October 26: Nazi Hans Frank is appointed governor general of a portion of German-occupied Poland, with his headquarters in Kraków.

October 28: A motion to amend the U.S. Neutrality Act to allow the sale of arms to besieged allies passes the Senate. It will clear the House and be signed by President Franklin Roosevelt on November 4. The change is contingent on the requirement that arms are not transported by American ships.

October 31: The SS imposes a series of arbitrary and highly restrictive laws on the Poles, including prohibitions against using phone booths and wearing felt hats. Violators can be given the death penalty.

November: In just one week, some 60,000 tons of supplies destined for the Allied cause are lost to German magnetic mines.

November 4: An anonymous person who signed himself "German scientist who wishes you well" leaves German weapons research secrets and a mine fuse on the windowsill of the British attaché in Oslo, Norway.

Warsaw's Jews are all herded into a ghetto.

Nazi soldiers round up Polish Jews: The Germans arrived at Plonsk, Poland -- with its 6,000-strong Jewish community -- on September 5, 1939, then established a Judenrat (Jewish council) the following July and a ghetto that September. Here, German troops assemble the Jews soon after the town's capture. During the next two years, as many as 12,000 Jews from Plonsk and the surrounding area passed through the ghetto. It was eventually emptied in November 1942 when its remaining inhabitants were consigned to Auschwitz for extermination.

Polish campaign results in massive casualties: By the end of the four-week campaign in Poland, 50,000 German soldiers were dead, wounded, or missing. Polish losses amounted to some 70,000 soldiers killed and 130,000 wounded. Another 90,000 Polish soldiers escaped to Hungary, Lithuania, Romania, and Latvia; many of them later made their way to Allied lines. Initially, the Wehrmacht's treatment of its 694,000 Polish prisoners was generally appropriate, although many civilians, a large proportion of them Jewish, were murdered. The SS and Sicherheitsdienst (German secret service, or SD) soon established themselves in Nazi German-occupied Poland, which was now regarded as a "nonexistent" state. Thereafter, the civilian population, especially Jews, suffered increasing oppression and persecution.

On the next page you'll find a World War II timeline highlighting the important events of November and December 1939, when the Soviet Union invaded Finland.

The Waffen-SS (Armed SS) evolved directly from the three original SS-Verfügungstruppe (Emergency Force) regiments -- Deutschland, Germania, and Der Führer -- within the Allgemeine-SS (General-SS). Many of the elite Waffen-SS units that were created attracted widespread notoriety. Warriors fought with a dedication, professionalism, loyalty, cruelty, and self-sacrifice that stemmed directly from their commitment to Nazi ideology and an absolute belief in Adolf Hitler.

Among the better known of the 39 Waffen-SS divisions (all of which had nationalistic or Teutonic titles) were Leibstandarte Adolf Hitler, Das Reich, Totenkopf, Wiking, Prinz Eugen, Hohenstaufen, Nordland, and Hitlerjugend. Generally, the Waffen-SS divisions had some of the best weapons and equipment available, and their achievements in combat were regularly prodigious. Their ideological faith in the Nazi cause and its political imperatives led various Waffen-SS units to commit a litany of atrocities and war crimes against military personnel and civilians alike -- especially on the Eastern Front.

Recruitment for the Waffen-SS was initially voluntary, with superlative fitness, Aryan antecedents, and NSDAP membership the basic prerequisites for all applicants. However, as the war continued, groups such as the Hitlerjugend (Hitler Youth) were increasingly pressuring recruits into "volunteering." Similarly, fitness requirements were relaxed over time -- notwithstanding an often harsh training regimen that demanded unquestioning obedience, was physically rigorous, and routinely included exercises that utilized live ammunition.

From 1941 on, the Waffen-SS was expanded significantly to enable the raising of "foreign legions." Heinrich Himmler depicted this as the creation of a "European army" to fight the "great crusade against Bolshevism." These foreign units varied widely in quality and were recruited from countries as diverse as Latvia, Estonia, Lithuania, Croatia, Norway, Denmark, Holland, France, Belgium, Italy, Russia, Galicia, Albania, Finland, and India. A 60-strong Britisches Freikorps was even recruited from disaffected British POWs.