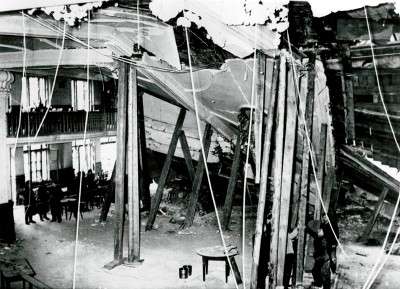 As January 1940 ended, Nazi Germany increased its attacks on Britain and the Soviet Union marched toward victory in Finland. Meanwhile, the United States and President Franklin Delano Roosevelt found it increasingly difficult to remain neutral. The World War II timeline below traces important events from January and February of 1940.

January 24: Reinhard Heydrich, the chief of the Nazi Gestapo, is charged with overseeing the evacuation of all Jews from the Reich.

February 3: For the first time since WWI, a German plane is shot down over England.

February 4: The Soviet Union attacks Finland from the sky, killing 14 in the capital city of Helsinki.

February 5: France and England commit to providing the Finns with military aid to help them fend off the Soviets.

February 9: U.S. Undersecretary of State Sumner Welles leaves Washington on a futile mission to examine the possibility of a peace settlement in Europe.

February 10: The Soviet Union and Nazi Germany agree to strengthen their alliance through increased trading of war material.

Two British ships, Salve and Servitor, successfully sweep a German magnetic mine for the first time.

The occupying Nazis in Czechoslovakia place restraints on Jewish-owned businesses. They prohibit Jews from selling art, jewels, and precious metals, and force the closure of Jewish-owned textile and leather shops.

February 11: Some 140,000 Soviet Union troops attack Finnish defenses on the Karelian Isthmus in a bid to break Finnish resistance. This assault will prove successful for the Soviets, who will overwhelm the Finns with their sheer numbers.

Below is a World War II image and headlines about Adolf Hitler, Nazi Germany, and Russia's war with Finland.

Adolf Hitler survives assassination plots: Adolf Hitler spoke at a beer hall on November 8, 1939, to commemorate the Nazi Party's failed coup of 1923. The Führer ended his speech earlier than expected. Minutes after he left the hall, an explosion buried the speaking platform under debris. Johann Georg Elser, a carpenter, had set the timer and planted the bomb. Elser was arrested and later executed. From 1939 to 1945, at least 17 other attempts to assassinate Hitler were made. Most were planned by officers who despised his military policies.

On the following page you'll find a World War II timeline detailing the events of February, 1940.

By the terms of the Molotov-Ribbentrop Pact of 1939, Finland was assigned to the Soviet sphere of influence. That October, Stalin demanded that the Finns cede to him the Karelian Isthmus (north of Leningrad) and the city of Hangö (at the mouth of the Baltic). Though offered Soviet territory in Karelia in return, Finland refused. Stalin then disavowed the Soviet-Finnish nonaggression treaty and planned to incorporate Finland into the USSR by force. He established a Communist government for Finland, but abandoned it when Finnish resistance made its establishment in Helsinki too difficult.

The Red Army's initial performance was courageous but inept. Soviets outnumbered Finns about four to one at the front, but the fieldworks and bunkers of the Mannerheim Line (named after Marshal Mannerheim, the Finnish commander) proved too strong. The Finns submerged political and social divisions for the national good. As many as 125,000 Soviet troops were killed in four months of fighting, which revealed deficiencies in training, equipment, supplies, tactics, and a leadership decimated by Stalin's purges. The Finnish army was also ill-equipped, but its men were well trained and highly motivated, and its snipers and ski troops inflicted heavy casualties.

The arrival of Marshal Timoshenko, 27 new divisions, and armored support enabled the Soviets to breach the Mannerheim Line on February 11, 1940. Not long after, the Finns accepted a Soviet peace offer, which was formalized in the Peace of Moscow on March 12. Finland had to surrender the territory demanded in October 1939, although it was allowed to keep its independence and most of the Finnish territory in the north occupied by the Red Army during hostilities.

For its aggression in this "Winter War," the USSR was expelled from the League of Nations. Kliment Voroshilov, Stalin's old crony, was dismissed as defense commissar for his complacency and incompetence in the campaign. Timoshenko, his replacement, introduced urgently needed reforms. In Finland, bitterness at the Peace of Moscow contributed to the nation's decision to join Germany's Operation Barbarossa in 1941.