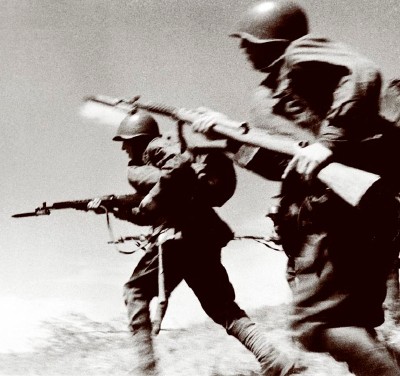 Allied forces made gains throughout Southeast Asia in July of 1944. The World War II timeline below summarizes this and other important events in early July 1944.

July 3: The Red Army liberates Minsk, site of one of the largest wartime Jewish ghettos and the center of the Soviet Union resistance movement.

After nearly four months, the Battle of Imphal and Kohima in northeast India comes to an end. The Japanese have suffered nearly 55,000 casualties, including more than 30,000 deaths, in this campaign against the Allies.

July 6: German field marshal Gerd von Rundstedt, one of Hitler's top military officers, is replaced after painting a pessimistic picture of Nazi Germany's chance of success on the Western Front.

With the battle for Saipan all but lost to the Allies, Lieutenant General Saito Yoshitsugu and Vice Admiral Nagumo Chuichi commit suicide rather than face the shame of surrender.

July 8: Admiral Miklos Horthy, the Hungarian regent, orders an end to the deportations of Hungarian Jews to Auschwitz-Birkenau. His order will come too late for more than 400,000 men, women, and children.

July 9: American bandleader Glenn Miller performs the first of a series of concerts for troops in the European Theater.

The U.S. declares the island of Saipan secured after about 3,000 Japanese troops had died in a suicidal charge against a large contingent of American soldiers on July 7.

July 11: Tens of thousands of women and children evacuate London as the terrifying and destructive German V bombs continue to fall.

July 12: The Nazis empty the so-called Jewish "family camp" at Auschwitz-Birkenau, sending 4,000 to the gas chambers.

Below are more highlights and images of events during World War II in 1944, including the torture and murder of poet Hannah Szenes for trying to help rescue Hungarian Jews.

Red Army overwhelming on Eastern Front in Operation Bagration: At 5:00 a.m. on June 22, 1944, in Operation Bagration, roughly two million Soviet Union troops waited -- to the east and south of Belorussia -- as the Red Army fired thousands of guns for two hours. The main assault (pictured) of this Soviet Union offensive began the following day. The German army, with fewer than a million soldiers, was no match for the Soviets and their firepower. By the end of July, the Red Army reached the outskirts of Warsaw. In a little more than a month, the German army lost approximately 350,000 men, including 31 generals.

Housing for Britain's World War II vets: During the latter part of the war, Winston Churchill announced the Temporary Housing Programme, which would develop prefabricated houses for returning veterans, their families, and other civilians. Prefabs were made of steel, timber, aluminum, or sandwiches of corrugated asbestos-cement panels filled with wood and wool insulation. The cost of prefabs, many of which were constructed by prisoners of war, averaged about £1,300. Though modest, the houses used space efficiently and gave each family such luxuries as a stove, a refrigerator, and a boiler.

Poet Hannah Szenes tries to help Hungarian Jews: In 1944 poet Hannah Szenes parachuted into Yugoslavia to help organize the rescue of Hungarian Jews. Born in Hungary, Szenes emigrated to Palestine. Szenes enlisted in the British Army in 1943 and was trained in Egypt. Soon after she was dropped into Yugoslavia, she was captured and tortured by the Germans. She gave up no information and was executed in November 1944. Earlier in the year, from May to July, German forces had deported more than 430,000 Hungarian Jews to Auschwitz, where more than 75 percent were killed on arrival.

British army Lieutenant General William Slim shines in Asia: Intellectual, courageous, and practical, William Slim was a British army lieutenant in World War I and a brigadier by 1939. Following service in East Africa, Iraq, and Syria, Slim was promoted to lieutenant general in March 1942. He commanded Burcorps in the 900-mile retreat from Rangoon to India. In October 1943, Slim took over the newly created British-Indian14th Army, which in 1944 he led brilliantly in defeating Japanese attacks, notably at Imphal-Kohima (March to July). The Japanese suffered more than 50,000 casualties. In Operation Capital, "Uncle Bill" employed air supply, guerrilla tactics, and inge­nious ruses, and recaptured Rangoon in early May 1945. Slim was arguably Britain's finest commander during the war.

French citizens punish collaborators: In France, public humiliation and more severe punishments befell people thought to have collaborated with Nazis or the Vichy regime. Some Frenchmen who had volunteered as officers in the Wehrmacht or Waffen-SS were executed as traitors. Ordinary soldiers who joined the enemy were sent to prison or given the option of serving in the French Foreign Legion.

Medical care for American soldiers: Medical care of American soldiers was always good, and it got better at the proper hospitals and convalescent centers that were set up as the Allies pushed deeper into Europe. Here, recuperating GI pals Bill Fernandez (left) and Mike Murphy enjoy some softball outside of Rome in the summer of 1944. Both had been wounded during the spring assault on Monte Cassino. The photo seems lighthearted, but both men knew that soon they would return to their unit, and more fighting.

See the next page for a detailed timeline of World War II events in late July 1944, including the worst American homefront disaster.