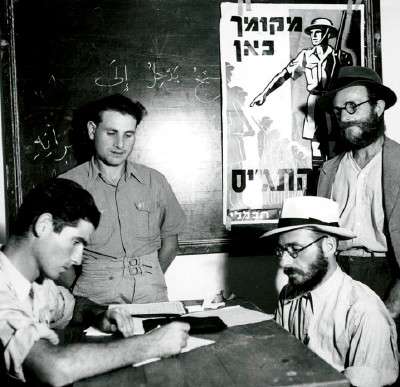 In October of 1944, Allied troops landed in the Philippines and the first Kamikaze pilot crashes into the USS Denver. The detailed World War II timeline below summarizes these and other events in October 1944.

October 20: American troops land on the island of Leyte in the Philippines and fulfill General MacArthur's promise to return to liberate the islands from the Japanese.

October 23-26: The Japanese navy suffers a resounding defeat as American forces dominate in the Battle of Leyte Gulf. The crowning loss for the Japanese is their super-battleship Musashi, which capsizes and sinks, costing the lives of more than 1,000 sailors.

Since it is no longer a member of the enemy Axis, Italy's diplomatic ties to the Allies are restored.

U.S. major general Albert Wedemeyer replaces General Joseph Stilwell as commander in the Chinese theater. This comes 10 days after Stilwell is removed at the request of Nationalist leader Chiang Kai-shek.

The Soviets assume control of the Bulgarian armed forces, as Bulgaria capitulates to Russia.

The German army quits the small Adriatic nation of Albania.

The first of the soon-to-be-legendary kamikaze pilots commits suicide as he crashes his plane on the deck of the USS Denver.

October 30: The Auschwitz gas chambers are used for the last time, as one final transport of Jews -- 1,700 men, women, and children from the work camp at Theresienstadt -- are murdered.

See the headlines below for more World War II events during 1944, including the enlisting of Jewish soldiers into the British army.

Casualties high for both U.S. and Nazi Germany at Aachen: For seven days, fighting had raged from building to building and room to room, with enemy snipers on rooftops picking off scores of U.S. soldiers. While American tanks struggled through debris-strewn streets to dislodge defenders, German soldiers and civilians took to cellars and sewers. This strategically unimportant city cost each side some 5,000 casualties, however, the U.S. was victorious and about 5,600 Germans were taken prisoner.

Jewish soldiers join the British army: In May 1939, Great Britain decided to limit Jewish immigration into the British mandate of Palestine. This policy increased tensions between Zionists (Jews who strove for a Jewish homeland in Palestine) and Britain throughout World War II. However, faced with the hideous threat of Nazi Germany, thousands of Palestinian Jews -- such as the ones seen here -- volunteered for the British Army. That army's 5,000-member Jewish Brigade was created in September 1944. The British trained Jewish fighters in sabotage, demolition, and guerrilla warfare -- techniques that, ironically, proved vital to the postwar Zionist resistance against British occupation.

Germans plan the Ardennes campaign: Hitler pored over plans for Nazi Germany's Ardennes campaign with staff members Reich Marshal Hermann Goring, Head of Security Police in France Helmut Knochen, two unidentified officials, and Chief of the Army General Staff Heinz Guderian. Hitler's irrational hope for the Ardennes attack, code-named Wacht am Rhein (Watch on the Rhine), was to seize the Belgian port of Antwerp (denying this vital port to the Allies) and to demoralize Britain and the U.S. into making peace separately from the Soviet Union. In an ideal outcome, Hitler would be free to shift forces to slow or halt the Soviet Union advance.

See the next section for a detailed World War II timeline of events in November 1944, including the destruction of the Nazi battleship Tirpitz.

To the south of Aachen, Germany, lies the densely wooded Hurtgen Forest. In 1944 it was heavily fortified by the Germans, and just to the southeast were the Roer dams. These dams were of considerable operational significance, for if breached by the Germans at a time of their own choosing, they could produce a major water obstacle to stall the Allied advance.

The German defense was centered on the village of Schmidt, and throughout the surrounding woodland were reinforced bunkers, snipers, mines, booby traps, dug-in antitank guns, and fixed line machine guns. It was a "green hell," within which the U.S. armor and artillery could do little to support the embattled infantrymen -- many of them newly arrived replacements -- who were drawn into the forest in ever-increasing numbers. Part of the formidable Siegfried Line defenses also ran through this damp, dark, freezing forest.

The bitter succession of battles fought in October and November by the Ninth, 28th, Eighth, Fourth, and First U.S. infantry divisions, under overall command of General Courtney Hodges's First U.S. Army within General Bradley's 12th U.S. Army Group, resulted in the most costly infantry fighting of the war in Northwest Europe for the U.S. forces. In early December, the Americans finally broke through the Hurtgen.

The excessive casualties sustained by some units in the Hurtgen were also attributable to poor preparation at divisional and regimental levels. Some U.S. troops lacked proper training and specialist equipment for close-country fighting. This type of combat was unlike the fast-flowing, mobile armored operations -- with guaranteed air and artillery support on-call -- to which the GIs had become all too accustomed ever since the breakout from Normandy four months earlier. Consequently, by early December, the Hurtgen combat had resulted in 24,000 U.S. battle casualties. A further 5,000 U.S. soldiers were noneffective due to trench foot, combat fatigue, and respiratory diseases.

Overall, American battle casualties in Northwest Europe that autumn totaled 57,000, not including 70,000 noncombat casualties. The Roer dams were finally captured on February 9, 1945, during a major new Anglo-U.S. offensive.